Who will replace Eric Holder? The thorny politics of selecting a new attorney general

Even though Senate Dems will be able to confirm a new AG in the lame duck, don't expect an adventurous choice 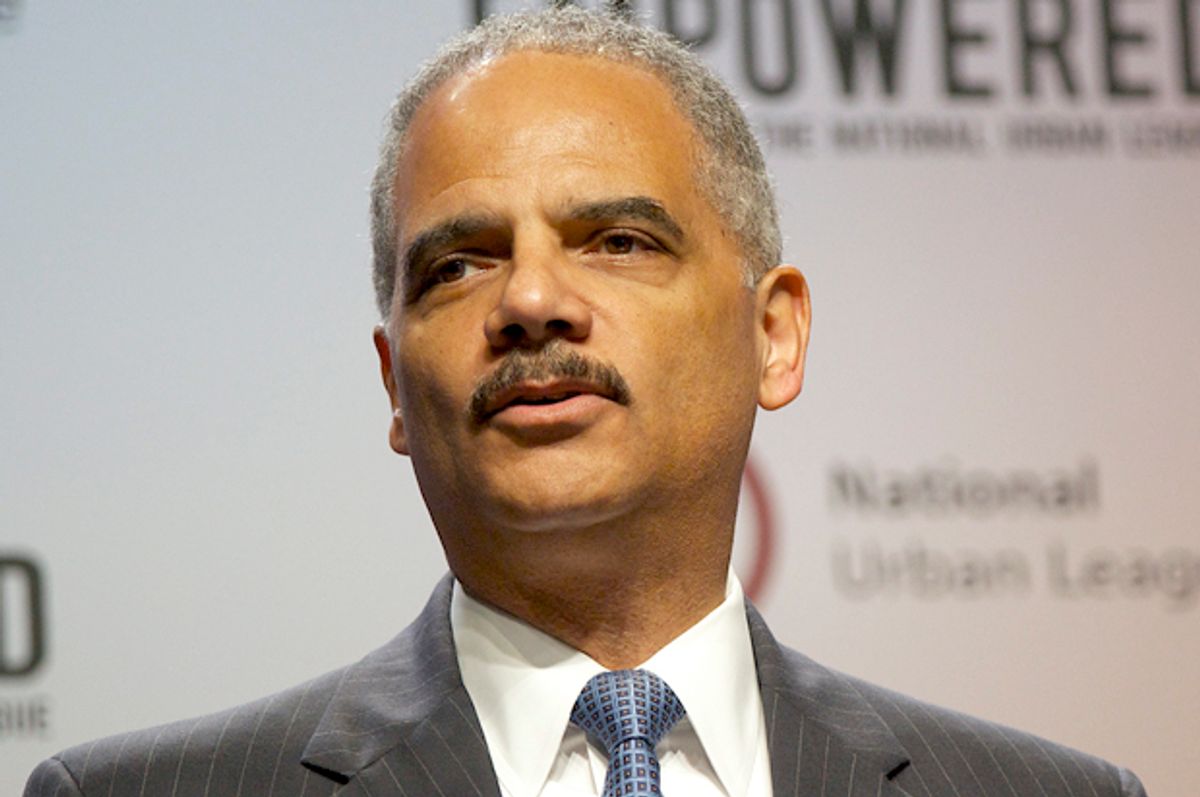 Eric Holder's resignation as attorney general does come as a surprise. While he's served a lengthy period already, dating to the beginning of the Obama administration, it looked like he might have gone the "full Reno" and weathered through two consecutive terms at the post. In the two years since the House of Representatives voted to find him in contempt, Holder finally appeared to feel comfortable enough in his role to pursue legacy issues of personal importance to him. His Civil Rights Division is in the midst of investigating police abuses in Ferguson, Missouri, and other departments across the country. Holder has also been leading the charge for drug war and prison sentencing reform, two of the few remaining areas in which this late-stage administration can effect real and profound progressive change.

But however powerful Holder's personal interest in civil rights and criminal justice arenas may have been, they're apparently not powerful enough to overcome his exhaustion. He's trying to get out before he's "locked in" for the final quarter of the Obama administration. It's the same rationale for why certain Bush administration staffers, like Karl Rove, left in late 2006: once you're in for the final two years, you're in.

Karl Rove's role as an aide to the president, though, wasn't a Senate-confirmed position, and congressional politics are even more cutthroat now than they were back then. Holder claims he's going to stay on the job until his successor is confirmed. Given the very real possibility of a Republican Senate majority next year, maybe Eric Holder will end up serving out the rest of President Obama's second term after all.

Except for our good friend, the post-election lame duck session. Once again Democrats who were cautious at the time should be grateful for Sen. Harry Reid's invocation of the "nuclear option" on judicial and executive appointments. Democrats will only need 51 votes to break a presumed Republican filibuster on Holder's replacement.

Procuring those 51 votes shouldn't be considered a sure thing, though. Democrats should expect zero votes from Republican senators in the lame duck if Republicans win control of the Senate this November. The GOP will be furious at the Democrats for using the lame duck to confirm a new leader of the Justice Department, denying Republicans the chance to make a circus of a confirmation hearing in 2015. And the nuclear option's track record has been stellar, but not perfect: recall how a number of Senate Democrats joined the successful Republican filibuster against President Obama's nominee to head the Justice Department's Civil Rights Division, Dego Adegbile. Even though the 2014 election will be behind them, never underestimate the ability of conservative Democrats to throw their lot in with Republicans determined to blunt the Obama administration at every corner.

We don't know yet whom Obama intends to nominate to replace Holder, but let's say there are two possible tracks: elevating a rising Democratic Party star, or promoting a quiet official from within the administration. If Obama is to take the former route, names like Massachusetts Gov. Deval Patrick or New York Southern District U.S. Attorney Preet Bharara are possibilities. For the latter, Solicitor General Don Verrilli comes to mind.

Verrilli comes to mind, specifically, because he's the name being floated directly as a "leading candidate for the job" in NPR's scoop of the Holder news. It makes sense that President Obama would be leaning toward this more cautious track, because that's what he always does with high-profile appointments. His replacements for the original Cabinet secretaries at Treasury and Health and Human Services have been Jack Lew and Sylvia Mathews Burwell -- quiet insiders with intricate understandings of the bureaucracy who aren't likely to spark an all-out partisan war.

The lame duck and the nuclear option will make the job of confirming an attorney general easier for Democrats. But the administration will still probably want to play it safe and not risk intra-party defections. A bureaucrat seems more likely.