Rob Schneider is dumped by State Farm, and takes to Twitter 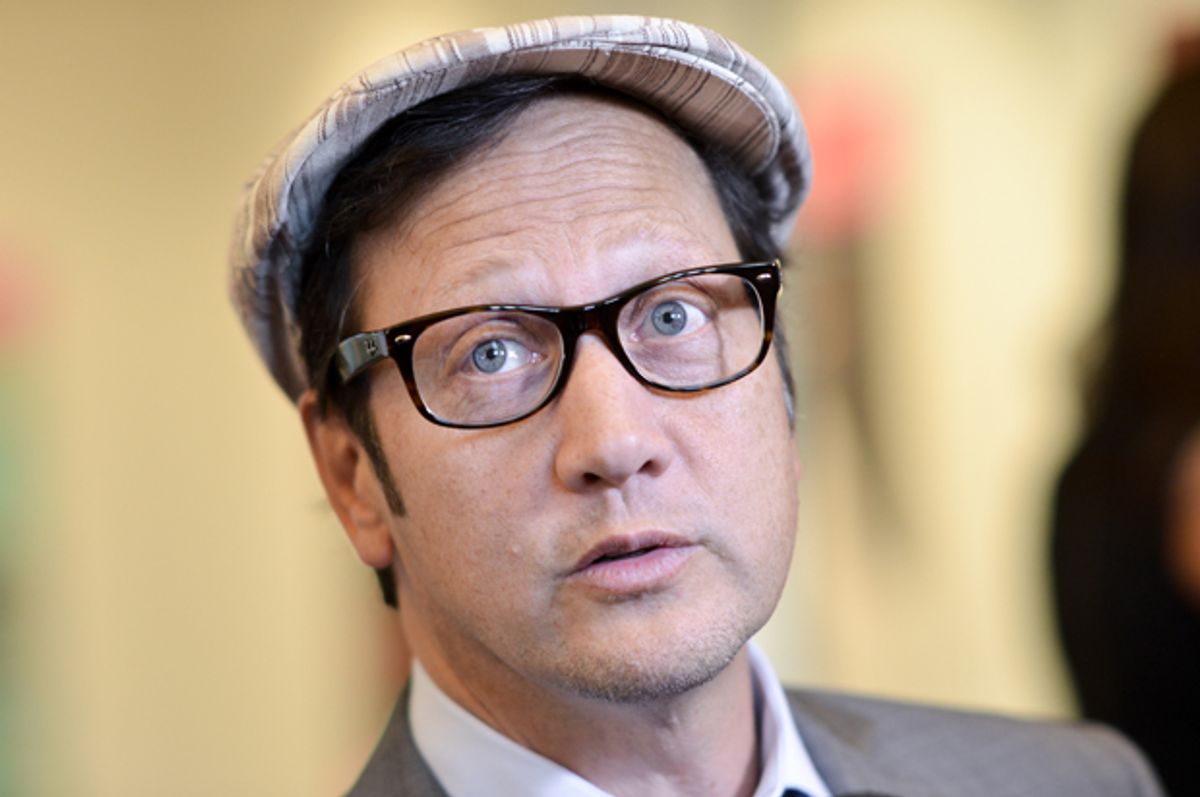 Today in irrelevant former TV stars who are now famous for being outspoken about crackpot stuff: Scooch over, Kevin Sorbo,  Adam Baldwin and Kirk Cameron, and make room for Rob Schneider.

Schneider, whose main claim to fame is an overdone "SNL" character from 20 years ago, has a long history of being outspoken on the subject of vaccines. Like, contends there's a Centers for Disease Control conspiracy to cover up a link between autism and vaccination outspoken. Like, compares vaccine requirements to Nazi enforcements. More than once. Just last month he railed on Twitter that "Today California passed a law to force parents to get a Doc's permission to not vaccinate their kids or they can't attend school! Nazi's." Last year, he narrated a Canary Party video that asserted that "Dozens of published research papers show that yes, vaccines and autism are linked." And following the death of Robin Williams last month, he went on a Twitter rant against "the Evil pharmaceutical industry," accusing that "#RobinWilliams was on a drug treating the symptoms of Parkinson's. One of the SIDE-EFFECTS IS SUICIDE!"

Perhaps it wasn't a shock, then, that State Farm, which recently resurrected his desperately grating copier guy to promise "double discount check-a-rooskis," got some pushback from consumers about their bizarre choice of spokesperson. After a social media tempest and a #DropRobSchneider protest, on Monday, the company announced it was dumping Schneider's spot, explaining it "has unintentionally been used as a platform for discussion unrelated to the products and services we provide. With that, we are working to remove the ad from our rotation at this time."

Despite the fact that formerly all but eradicated diseases like whooping cough have been making a roaring comeback of late, thanks in no small part to the anti-vaccine movement, Schneider seems to be holding firm in his stance. On Wednesday, he tweeted a quote from George Washington, saying that "If the Freedom of Speech is taken away then dumb and silent we may be led, like sheep to the slaughter," because getting ditched from a spokesman gig is exactly the same as what the Founding Fathers went through fighting for independence. He added that "People are looking for a less toxic way to stay healthy!" and that "Thanks to all my supporters who believe as I do that parents should decide what's in the best interests of their child, not Gov't mandates."

Without even getting into the overwhelming amount of evidence that there is no link between autism and vaccination, and that the entire argument rests largely on an "elaborate fraud," let's just note that "best interest of the child" also includes behaving in a socially responsible manner toward others. It's not the work of "Nazis" for a school system to have in place certain health requirements for children's enrollment. That's called trying to prevent a public health crisis. Freedom to speak does not mean one is entitled to a corporate sponsorship. And it's one thing to be a skeptical, informed consumer -- I learned a few of these lessons the hard way three years ago when my daughter's pediatrician gave her the wrong vaccine at a routine checkup. It is something else to cling to conspiracy theories and act like a victim when the people paying you choose to distance themselves from you. And making misinformed statements? That's just some dubious science-arola.