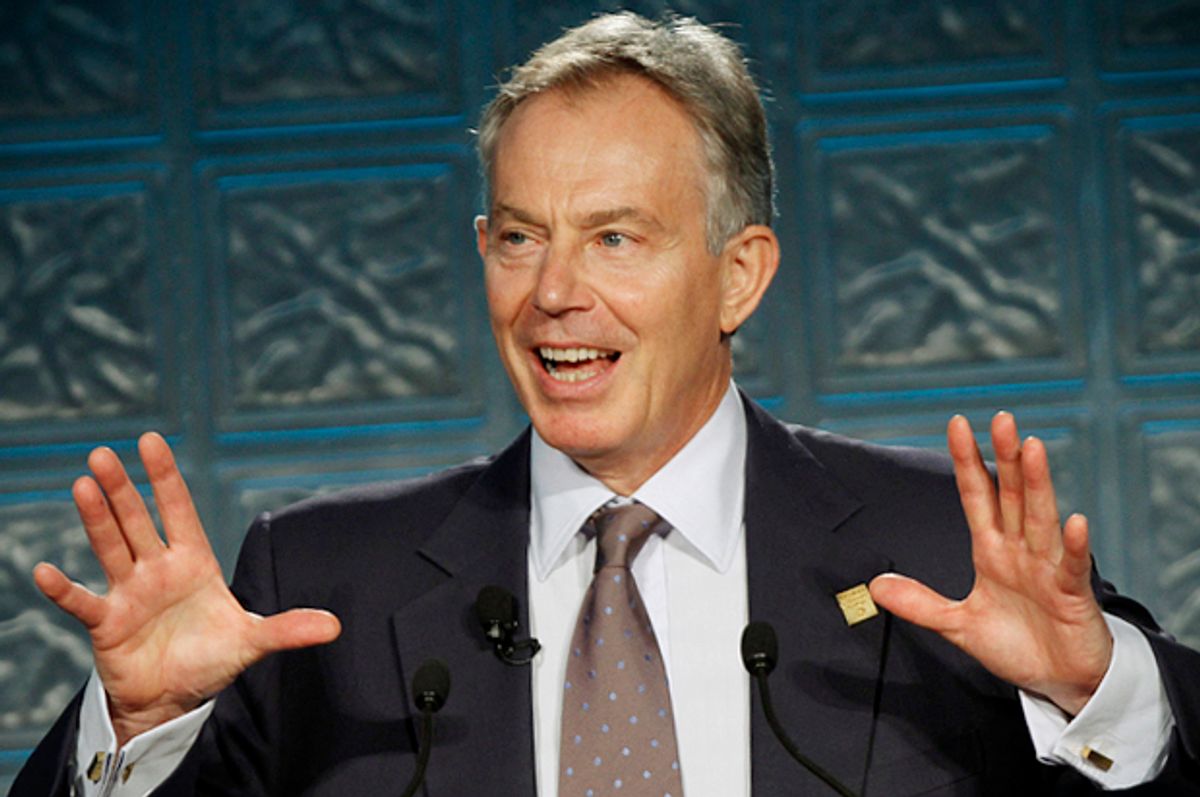 When the British magazine Gay Times revealed on Friday the stars of its 30th anniversary issue, featuring those stars and other legendary figures in the LGBT community, you might not have expected the former prime minister to fit in. He's different from the other choices on the list. Unlike Mark Gatiss and Andy Bell, he's not a gay man. Unlike Eric McCormack and James Sutton, he didn't gain fame as a straight actor playing a gay character. Unlike Joan Rivers, he's not a straight woman with a huge gay male following. So how'd the guy responsible for Michael Sheen's career get to be a big gay hero? By doing the seemingly simple thing of remembering that gay rights are human rights.

During his tenure as his country's leader, Blair – who's appeared in the Gay Times magazine twice before -- oversaw the lowering of age of consent for gay couples to match that for heterosexual ones and the repeal of Section 28, which banned the "promotion" of homosexuality in schools as "normal." He helped introduce civil partnerships to the U.K., a move he said had a "civilizing effect" on the country as a whole. "It's a thing that doesn't just give me a lot of pride," he has said, looking back on his career, "but it has actually brought a lot of joy." In his post-Downing Street life, Blair, a Catholic, continued to be an outspoken supporter for full marriage equality, which was legalized in Britain this past spring. All of this makes him an ally, but an icon? As Gay Times' Benjamin Butterworth explained in the Guardian Friday, "The title isn’t bestowed on someone simply for being camp or fabulous, but rather for using their time and work to pursue gay rights. That’s the real definition of an icon. If we define a gay icon as somebody who … said tolerance not bigotry was the answer, and somebody who made that change happen, then Blair fits the bill."

Straight men have long been out of the fight for LGBT rights, in no small part because there's a persistent and often smarmy questioning of their motives when they show their support. Fortunately, that stigma is slowly beginning to change. In the past few years in our country, we've seen athletes like Brendon Ayanbadejo and Chris Kluwe speak up for for marriage equality. Elsewhere, we've seen the glorious and delightful bromance between the gay Sir Ian McKellen and the straight Patrick Stewart. We've seen that when straight men befriend gay people and advocate for gay rights, they don't magically lose their heterosexuality. They just become better humans.

Earlier this week, Emma Watson made the plea for men and boys to take up the cause of feminism, because, as she put it, we need everybody in the room to feel invited and welcomed. It's the same with civil rights, with LGBT rights. If it affects a portion of the human population, it affects everybody. Respect and dignity have to be fought for and practiced, not just by the members of a particular group but by the much-needed allies outside of it. In some ways, especially by those outside it -- otherwise what's perceived as a minority issue remains forever just a minority issue. With his consistent actions for gay rights, Blair understood that and practiced that. And though the title of gay icon isn't just bestowed on someone "fabulous," it makes him pretty fabulous nonetheless.