The most surprising R.E.M. covers

Bet you didn't know that R.E.M. once covered the Barney Miller theme song -- and also, all of these 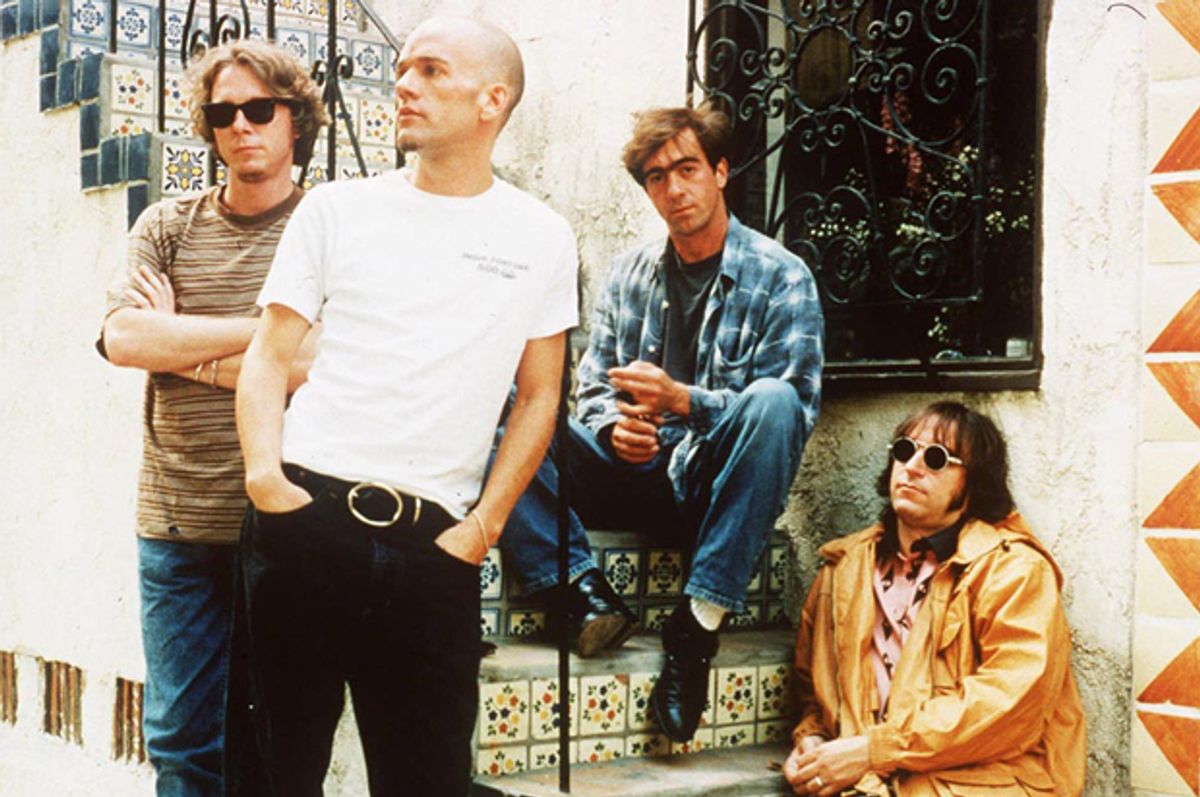 Salon's "The 12 best cover songs you've never heard" list a few weeks ago apparently inspired R.E.M. to start posting a slew of their best covers on Facebook, from Beat Happening's "Indian Summer" to Aerosmith's "Toys in the Attic." In turn, these videos inspired us to reminisce about some of the more obscure reimaginings in the Georgia band's catalog. Certain songs make perfect sense; for example, a clanging version of post-punk totem Mission of Burma's classic "Academy Fight Song" or an appropriately jangly take on Television's "See No Evil."

But throughout their career, R.E.M. unleashed a few choice curveballs, either live in concert or in the studio. Here are 10 of the most surprising covers. (Special thanks to R.E.M. Timeline and archive.org for their assist with this list.)

R.E.M. was famously the antidote to '70s stadium rock—but they were never anti-mainstream or anti-pop. In fact, on their fall 1987 tour, the band was fond of covering ex-Foreigner singer Lou Gramm's hit "Midnight Blue." This version of the song not only contains snippets of Psychedelic Furs' "Heartbreak Beat"—it also features heartland-jangle guitars, some rather fine chorus caterwauling from Michael Stipe and peppy Mike Mills harmonies.

Speaking of classic rock: In 1995, the band closed their "Monster" touring obligations with three nights at the Omni in Atlanta. During the first night, they dusted off a cover of Fleetwood Mac's "Tusk," but during the second night, the band busted out something even rarer: "Don't Fear the Reaper," a tune they last did in 1983. The results are solid, between Stipe's scraggly vocals and Peter Buck's yearning, doomy riffs. (Clearer audio of this song can be found here.)

Gloria Gaynor, "I Will Survive"

Around the holidays, members of R.E.M.'s official fan club always received a gift package with things such as stickers, postcards, a calendar and (of course) music. In 1996, this came in the form of a 7-inch with a cover of Jay and the Americans' "Only In America" b/w Gloria Gaynor's "I Will Survive." Unlike Cake's cover from the same year, R.E.M.'s version of the latter is somber and stripped down, and based around organ and acoustic guitars.

Fittingly, in 1994—the year of the snarling, electrified "Monster"—fan club members received a 45 featuring this noisy cover of San Francisco punk band Flipper's seminal "Sex Bomb." Raucous and abstract, it's one of the most outré things R.E.M. ever committed to tape.

Close behind "Sex Bomb" in terms of out-there (pun intended!) music is this fan club curiosity from 1992, a thrashing, punky take on the novelty song by U.K. cult artist Spizzenergi.

Throughout the years, the band paid tribute to country and folk greats of yore in the form of covers of "Wichita Lineman," "Hello In There" and "Galveston." This cover of the Charlie Rich-popularized "Behind Closed Doors," however, is a bit less common. Taking place during an oft-bootlegged 1985 Rockpalast TV appearance, the cover comes at the end of "We Walk" and is rather wobbly—until Stipe lets loose a twangy vocal surge on the song's chorus: "And she makes me glad that I'm a man/'Cause no one knows what goes on behind closed doors."

In 1983, R.E.M. did an all-covers set on Halloween. Playing under a pseudonym, the band ripped through homages by expected influences (T. Rex, Velvet Underground, The Byrds) and some, er, offbeat ones—like this brief, sludgy run-through of the "Barney Miller" theme heard at about 5:25.

R.E.M. are avowed Stooges fans—they covered "I Wanna Be Your Dog," of course—but their cover of a David Bowie co-write from "The Idiot" is a little less common. The band's version is perfect, all strutting piano, buzzsaw riffs, gang harmonies and strident vocals.