Obama loses the left: Why his low approval rating may be here to stay

For many liberals, it's Sen. Elizabeth Warren's party now. After six years, here's why they're ready for a change 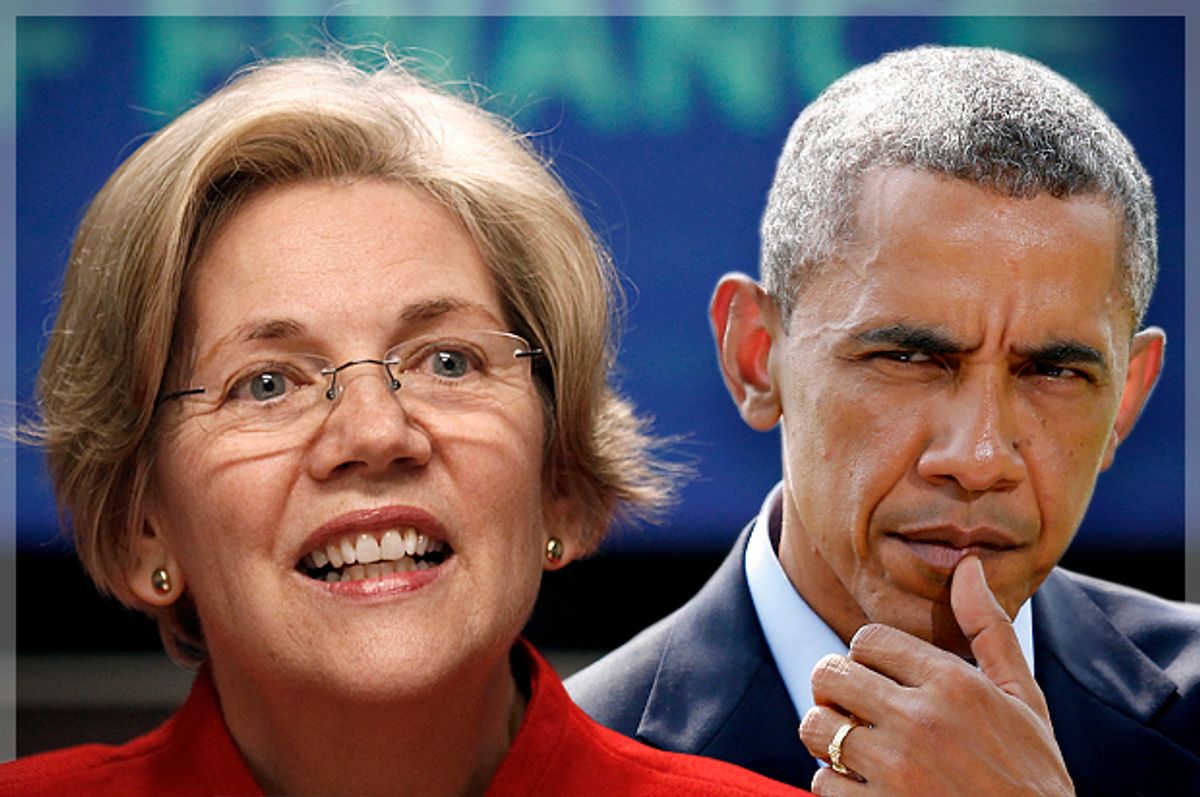 Except for the brief interregnum that separated the Republican Party's George W. Bush era from its current Tea Party incarnation, President Obama has never enjoyed the kind of high approval ratings that used to accompany most two-term presidents. Whether it's due to his race, our growing ideological polarization, the poor economy, or a combination of all of the above, Obama's rarely known what it feels like to be a president of whom more than half of Americans approve. According to the Huffington Post, it only took until the tenth month of his first year before his number dipped below 50 percent.

Fighting as he is now to keep his approval rating north of 40 percent, November 2009 probably looks to Obama like the good old days. And mindful, perhaps, of how he's previously looked on the verge of irrevocably losing the people's faith, only to bounce back to his usual place in the mid- to high 40s, Obama may also believe that this current spate of bad polling will eventually pass. Anything's possible; the economy could start booming. Unemployment could drop. Wages could rise. Obama could recover.

But I'm starting to think this time may be different, and that when it comes to Obama's relationship with millions of former supporters, there's no going back.

What's got me thinking this way is a raft of new polls showing not only that the president is unpopular, but that he's becoming increasingly so in the very places, and among the very people, he could usually count on for support. A release from Field Poll earlier this month, for example, found the president to have only a 45 percent approval rating in über-blue California. Most strikingly, the pollster reported that California Dems' support for Obama dropped 8 percent during just this summer and was down 11 percent in Los Angeles alone.

The Field Poll wasn't an outlier, either. This past week, Marist College released a poll from that other bedrock of the Democratic Party, the state of New York. No good news there, either: Only 39 percent of registered New York voters are happy with Obama's performance, the lowest score he's registered in the state throughout his entire presidency. As was the case with the California poll, Marist found a big drop in the number of New York Obama supporters in the past few months. He was at a passable 45 percent as recently as July.

It's easy to see, then, that a good number of one-time supporters of the president are profoundly unhappy, and that their unhappiness has increased dramatically of late. It's also fair to guess that unhappiness over the crisis in Ukraine, the new war in the Middle East and the decision to kick the can on a deportations-related executive order are all playing a role. But although these developments are recent, they're not exactly new — liberals have been uncomfortable with targeted drone strikes and record-setting levels of deportation for years. Why only now do these disagreements represent White House failures so egregious that they justify withdrawing support?

Obviously, I can't give you a definitive answer to that question, at least not yet. Polls aren't predictions so much as snapshots of a particular moment in time — and they're blurry ones, at that. We may find out in the future that this summer was a bad one for the U.S. economy, which could explain the president's troubles more persuasively than a decision about U.S.I.C.E. bureaucracy or the international status of Donetsk. But assuming this summer swoon is no mere blip, and instead represents a permanent change in liberals' judgment, I think timing may be the reason why.

Put simply, my guess is that a growing number of liberals have decided that after nearly six years, and with no reason to believe a Democratic congress is on the horizon, Obama's done nearly all he'll ever do and the verdict is in. And although Obamacare seems to be a policy success, and Dodd-Frank is reportedly working better than many expected, many liberals have concluded that these balms are not enough to soothe the lingering pain of their unmet expectations. Not so much on policy — which most people, including those who'd describe themselves as politically informed, don't think much about — but on politics, where the contrast between Obama and other professional politicians used to be much clearer.

When Obama first ran for president in 2008, much of the reason he inspired such enthusiasm was because he was willing, at times, to push the boundaries of what was considered acceptable in a mainstream presidential campaign. He didn't run away from his past; he refused to wear a flag pin; he gave long, smart, dense speeches about history and race. In retrospect, that bravery looks a little thin — he'd end up donning a flag pin and disowning his former reverend — but it wasn't a complete fabrication, either. Liberals hoping he'd change some of the dumbest norms of American politics were not insane.

Yet throughout his presidency, Obama's been more cautious, less willing to fight a losing battle in the hopes of winning the war by changing the terrain. During the first four years, many liberals found this frustrating but cut him some slack, remembering how all presidents make compromises for reelection — and, more importantly, witnessing an often baldly racist opposition seeking to delegitimize him at every turn. We're nearly halfway through the second term now, however, and as evidenced by his immigration decision and his acquiescence in the face of the U.S. war machine, he's still acting the same. He remains not nearly as timid as circa 2000 Al Gore, but he's no Elizabeth Warren, either.

At this point, I think many liberals who once waited for the president to shed his centrist camouflage have given up hope that they'll once again see the guy they swooned for during the campaign. As president, at least, he is who he is; and there's little reason to think he'll change. For a man who so reveres Abraham Lincoln — whose greatest trait, according to the celebrated historian Eric Foner, was his "capacity to grow and change and evolve" — it's hard not to agree that Obama's consistency is a shame.