It's clear the 20-year-old is a rising star, but his first joke could have picked a better target 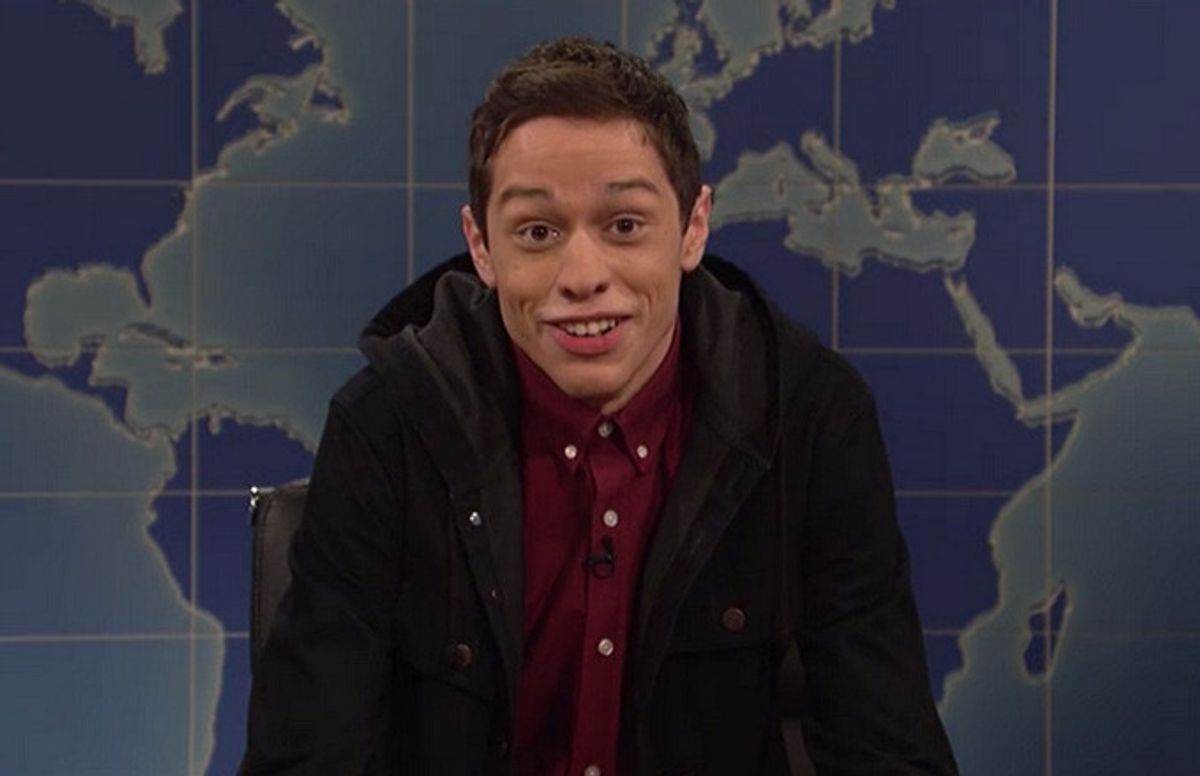 Despite all the fanfare around “SNL’s” anniversary, the Season 40 premiere unfolded Sept. 27 without much ceremony. It was an “SNL” episode like any other, but with a new vitality; highlights included sketches like “Booty Rap” and most notably a reenergized “Weekend Update” segment, which had gotten languid after Seth Meyers departed last year.

It was, in large part, due to the two new faces that made the “Weekend Update” segment seem relevant again: Michael Che and Pete Davidson (who, again, were introduced without any big reveal). But audiences already knew Che thanks to “The Daily Show,” so the real wild card was Davidson. The immediate verdict on Twitter, including by New York Times media reporter Bill Carter, was that this kid is one to watch.

Davidson, 20, is one of the youngest cast members in the show’s history. His father, a firefighter, died during 9/11. Davidson coped with the tragedy by turning to comedy at 15 and rose up the ranks in the New York comedy scene. Maybe it’s his pure stand-up background, but in his “SNL” debut, he seemed at-ease, confident, like he was just having fun. Che, presumably nervous, makes a few (understandable) mistakes with his first few lines, while Davidson breezes through.

But Davidson’s segment was also the most controversial one of the night. As the “resident young person,” Davidson joined Che at the desk and asked, “Have you ever played the ‘How Much Money Would You Go Down On a Guy For” game?”

“For those of you who don’t know what the game is, it’s basically, one of your friends will be like, 'Hey man, would you go down on a guy for a million dollars?' And then we would all lie and be like, ‘No...’” he explained. He goes on to joke about how he would perform oral sex -- for a lot less money, even -- because of course he'd like to have more money. "Of course I would!" he exclaimed to Che. "A million dollars is a steal! I hope he starts at a million! I would do it for $3,000 if I had to be honest with myself. Even if I was doing well. Like even if I was on a boat, and it was my boat, I would still do it. A boat needs fuel -- a lot of people don't realize that. They just get a boat, without fuel, and they're in the middle of the ocean and they're like, 'ah, I wish I went down on that guy!' I wouldn't be stuck in the middle of the ocean right now."

I really wanted to like this segment, because Davidson is clearly sharp and because it's an observation about money and our misconceptions about how it changes us and how it doesn't. Accepting $1 million to do X doesn’t mean you identify with X, it means you identify with wanting more money!

I get that Davidson, as a straight man, has no desire to perform oral sex on a man. But the conceit of this game he's playing is that he'd have to do some unfathomably gross thing for money, and that "gross" thing is gay sex. At first it seemed like he was going in a different, slyer direction -- toward making fun of the homophobic bros who make bets about gay sex, rather than gay sex itself -- which could have made for a genuinely great bit. Instead, he admits that he finds the idea of oral sex with a man “gross" and he hedges by saying, “Look, if you’re gay it’s fine -- me and my friends are just trying to make money.”

There were just so many other ways he could have made the same joke -- Why not let the punch line in this joke be something inherently, universally repugnant, like taking the cinnamon-challenge (OK, that might not be worth a three-minute riff), or eating food that fell into sludge from infamously dirty New York City streets, or (feel free to run wild with your imagination here...)?

I like Pete Davidson and I think Carter is right that he’s one to watch. He is so funny that he surely doesn't need to rely on the '90s-era shock value of "gay sex!" for laughs. I'd love to see him apply his talents and his jokes to subjects that are a bit more worthy. Sure, edgy comedy often does offend, but next time, I hope his target is one that really merits a takedown.