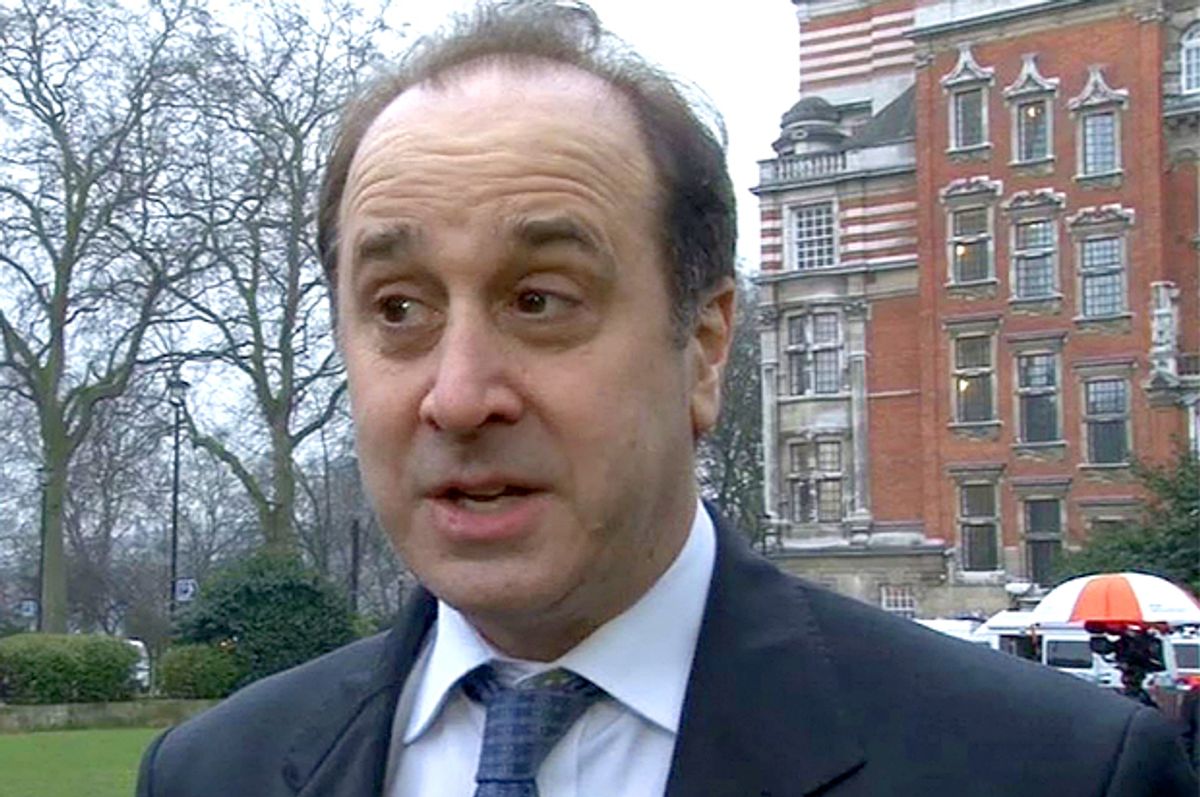 It's a familiar tale – one involving a middle-aged politician and his scandalously embarrassing interaction with a much younger woman. In this case, she was a beautiful blonde in a tank top who said her name was Sophie Wittams, and who'd described herself as a "twenty-something Tory PR girl." She posted flirtatiously on Twitter with a number of conservative members of the British Parliament, and one of them took the conversation to the next level.

Over the weekend, the 56-year-old married father of five Brooks Newmark resigned from his post as minister for civil society, calling himself "a complete fool" after the Sunday Mirror reported that Newmark had sent "a graphic snap exposing himself while wearing a pair of paisley pajamas." Brooks, by the way, was the co-founder and co-chair of Women2Win, a UK organization devoted to getting more women involved in conservative politics. But if you think this is just another case of a creepy male imposing his crotch shots on unsuspecting females, consider this – Newmark sent the photo after the person he knew as Sophie sent a sexually explicit photo first. Oh, and also, Sophie was actually a male freelance reporter.

In a truly hilarious display of lack of self-awareness, the Mirror this weekend described the exchange with Newmark as a "sleaze scandal" that will bring "embarrassment" to the Parliament and prime minister. Gosh, is it as sleazy and embarrassing as a guy pretending to be a hot blond chick he so can coerce men into showing him their junk?

Conservative MP Mark Pritchard has already declared this week that "questionable techniques" were involved in the Mirror story, and that he would be issuing a "formal complaint" to the Independent Press Standards Organization about the Sunday Mirror's behavior. It'll be the first true test of the organization, which was launched just this month. Its code of ethics states that "Engaging in misrepresentation or subterfuge, including by agents or intermediaries, can generally be justified only in the public interest and then only when the material cannot be obtained by other means." But the Mirror's editor, Lloyd Embley, insisted on Twitter this weekend that "It wasn't a Mirror sting" and "subterfuge only allowed if there's a public interest. Big part of his job was to attract young women to Tories..."

The woman whose photograph was used as Sophie's avatar without her permission, a Swedish model named Malin Sahlen, meanwhile, says she's "shocked" that her image was part of the sting, and feels "exploited" by the paper's behavior, calling it "something terrible." A second woman whose photo was used in the Mirror operation, Charlene Tyler, told the Telegraph Monday that it was "quite wrong" for the Mirror to have used her photo, adding, "Grown adults can do whatever they like as long as both of them are over the age of consent."

The false account has now been deleted, but some of the debris of the more innocuous public exchanges between the phantom Sophie and her conservative virtual friends still remains. None of the other MPs the fake female interacted with appear to have taken the bait, and as for Newmark, he certainly seemed to be engaging in a consensual exchange, one in which he didn't send the first explicit photograph. So let's remember that we're not talking about a case in which a woman independently approached a reporter and said she was being harassed or even hit on. We're talking about a situation in which a man's career is now over and the images of at least two women have been used without their consent, because a tabloid reporter had a hot idea. Reporting, even at the level of the gutter rags like the Mirror, is not supposed to be about creating events and then hyping them up. That's a dangerous path to go down, one built on deception and the most prurient curiosities. And there's no public interest to be found anywhere in there. Just a lot of lies and damage.