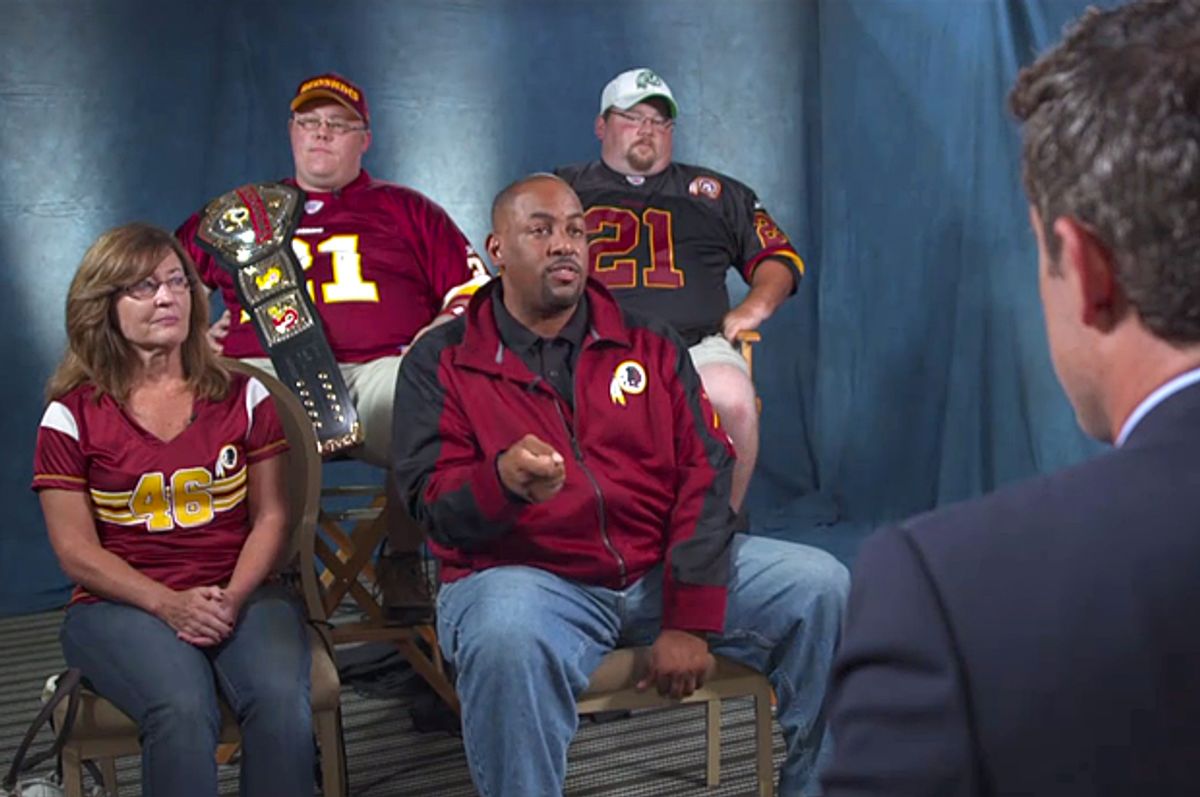 "That did not go as I’d hoped," says Migizi Pensoneau. The writer, producer and member of sketch comedy group the 1491s is referring to what went down after one of the most memorable, contentious "Daily Show" segments ever.

The deeper we get into fall, the more intense the controversy over the Washington Redskins' name has become. Opposition to even speaking or writing the name has intensified, from sources as varied as high school newspapers and major broadcasters. "South Park" ruthlessly skewered the debate in an episode that declared, "Digging in our heels and pissing on public opinion is what the Redskins are all about!" And earlier this month "The Daily Show" taped a headlines-making segment in which four supporters of the Redskins name met with Jason Jones – and, to their surprise, a group of eight Native American activists.

The encounter involving four fans of the team and its current name was allegedly so intense that one person called the police. She told the Washington Post afterward, "The Native Americans accused me of things that were so wrong. I felt in danger. I didn’t consent to that. I am going to be defamed."

"TDS" went ahead and aired the segment last week, albeit edited so that only the visual of the entrance and not the conversation between the two groups was depicted. And now, in a piece for the Missoula Independent, Pensoneau gives his version of how it went down. As he puts it, the plan was that after they walked in on the pro-Redskins fans, "The panel would be embarrassed, we’d be indignant, they’d be on their way—appropriately uncomfortable—and then we’d get our chance to talk."

Instead, Kelli O’Dell, the same woman who said she'd felt "defamed" and "in danger," began to cry, and then, "Sobbing and accusatory, she and the others left." That's not part of the segment "TDS" showed. Nor is the part they shot in which Pensoneau and two others members of his group went with Jones to shoot them wandering around the Redskins tailgate. That's where it got bad. Walking through the crowd in a satiric "Caucasians" shirt, he says, "There were points during that hour-long experience where I actually was afraid for my life. I have never been so blatantly threatened, mocked or jeered. It was so intense, so full of vitriol that none of the footage ended up being used in the segment." And he recalls that "a blonde little wisp of a girl" threatened, "I’ll f__king cut you."

He also mentions "the man blowing cigar smoke in my face, the man who mockingly yelled, 'Thanks for letting us use your name!' the group who yelled at us to 'go the f__k home,' the little waif who threatened to cut me, the dude who blew the train horn on his truck as I walked by the hood," so you can understand why he's got a different perspective on the woman who felt ambushed by a "roomful of calm Natives."

As the super sketchy Redskins "facts" site would like to remind you, there are plenty of people who authentically believe that the team's name is not offensive and support it – including individuals within various indigenous communities. There are also, undoubtedly, plenty of people who like the name and don't think too much about it but who also wouldn't threaten to assault a stranger in a parking lot for having a different take on the issue.

Yet the ugliness Pensoneau describes being hurled at him still represents the difference between the two sides of the debate. Because it's used as a symbol of entitlement, even by well-meaning fans. Because while even a conversation around changing it makes some people feel threatened, real people protesting the name actually are being threatened. And that's precisely why the name has to go.