5 absurd ways education is under attack: The school board in Denver is just the tip of the iceberg

Denver students protested a conservative-led proposal. Here are other ways education is being destroyed by ideology 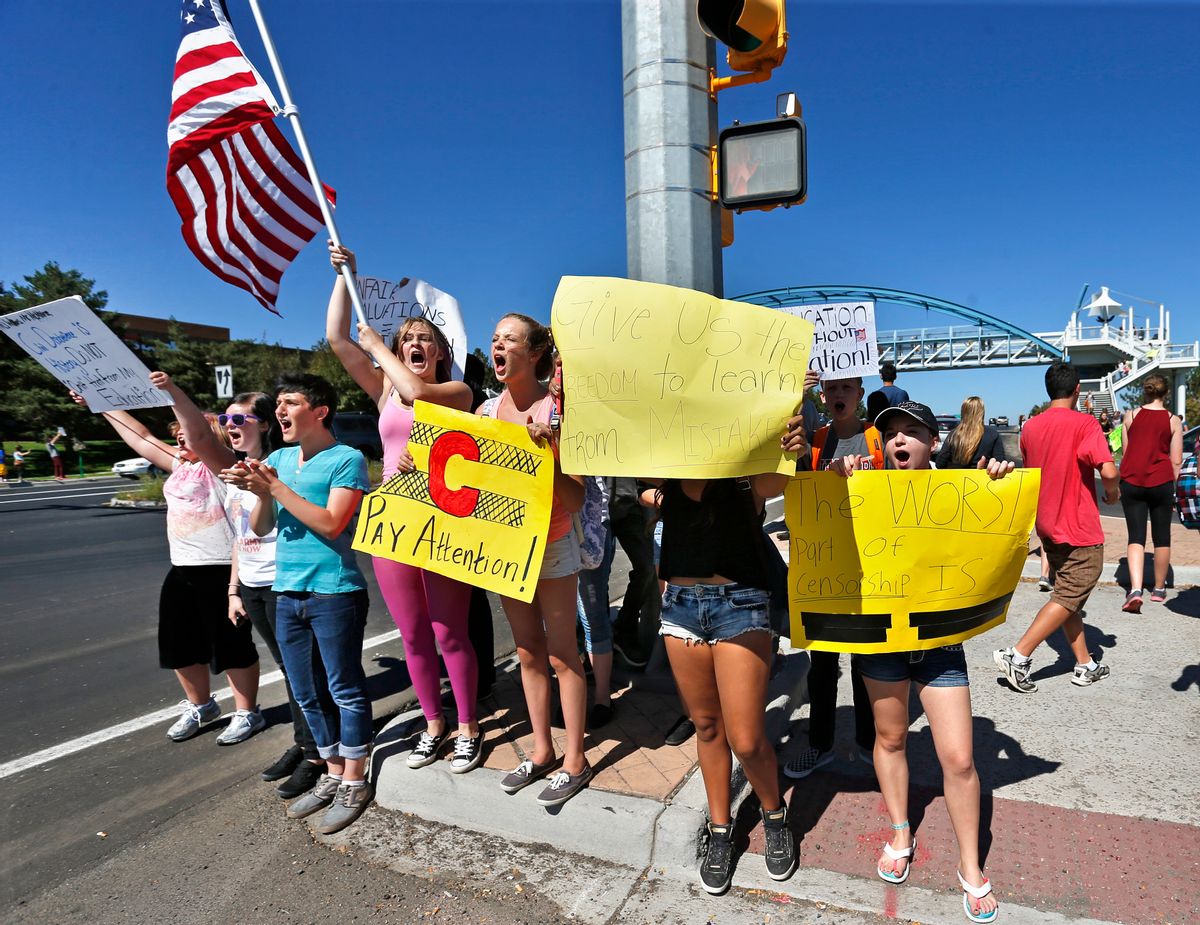 Students line a busy intersection protesting against a Jefferson County School Board proposal to emphasize patriotism and downplay civil unrest in the teaching of U.S. history, in the Denver suburb of Littleton,Thursday, Sept. 25, 2014. Several hundred students walked out of class Thursday in the fourth straight day of protests in Jefferson County. (AP Photo/Brennan Linsley)
--

Today, two Denver schools' teachers are participating in a sick-out to protest alterations to the U.S. history curriculum and changes to their pay. Last week, hundreds of high schoolers in suburban Denver, Colorado protested a conservative Jefferson County School Board proposal that aimed to refocus American history on events that taught respect for authority and patriotism, and acts of protest or civil disobedience. (These changes, the New Republic points out, were made as a conservative reaction of College Board's changes to the AP History test standards -- and therefore the curriculum.)

Take a moment to think about what American history could look like through the Jefferson County School Board lens: The potential downplaying of the civil rights movement, the protests against Vietnam, the woman's suffrage movement, progressivism -- and of course the acts of civil disobedience that sparked revolution and eventually our country.

These students are not the only ones whose curriculum is either in danger of being altered, or has been changed due to blatant ideology -- religious or political. Here are four more examples:

Over half of the states in the U.S. -- 27 -- emphasize abstinence-only sex education, according to a February 2014 Tufts School of Medicine report. And here's the problem: "Studies have shown that students who receive comprehensive education are 60% less likely to become pregnant or get someone else pregnant," the report states. "Teen pregnancy rates in 2013 were highest in Mississippi and Arkansas, and both states have abstinence-only education."

In a majority of states, schools are also allowed to teach skewed statistics or medically inaccurate information to schools. Washington, DC plus 41 states are allowed to teach sex education that misrepresents the effectiveness of contraception, or only teaches the downsides of abortion.

And in eight states, Tufts reports, schools are "no promo homo" states, meaning that the are allowed to emphasize, as in Alabama, that "homosexuality is not a lifestyle acceptable to the general public."

In 2013 high school senior, Katelyn Campbell, said she planned on filing a complaint with ACLU over her West Virginia school's abstinence only "slut-shaming" presentation. Last year in Ohio, republicans adopted portions of the state budget that cut down on funding for sex-education and mandated and abstinence only approach.

2) A re-writing of history in Texas:

Earlier this month, Texas State Board of Education  made headlines due to the use of textbooks that gravely skewed history.

"Four years ago, the Texas State Board of Education (SBOE) adopted new standards, known as TEKS (Texas Essential Knowledge and Skills), for social studies textbooks in the state’s schools," the Daily Beast explained. "The process ignited an international media storm."

The TEKS requirements were widely criticized, even by the conservative Thomas B. Fordham Institute. This led the non-partisan watchdog group Texas Freedom Network to have several PhD scholars and doctoral candidates at the University of Texas to look into the text's historical inaccuracies, or omissions in the text.

What they found was rather unsettling. "First, most of the publishers had tried hard to deal with the situation that TEKS presented," Edward Countryman, one of those scholars, wrote for the Daily Beast. "Second, however, dealing with TEKS at all means distortion, or worse." One of those issues included omitting Native Americans and African Americans as history makers, but rather displaying them as bystanders or victims.

Another issues were those listed as influences o the Founding Fathers. In the TKES textbooks that includes religious leaders -- Thomas Aquinas, John Calvin, and Moses, which doesn't have historical backing:

"Careful analyst by Justine Esta Ellis (a scholar who was not part of the TFN group) finds the strategy of starting with Moses is aimed at presenting the United States as a unique 'redeemer nation,' predestined among all others to act out God’s will. Arch-conservative David Barton, who has no historian’s credentials but who nonetheless has had a huge impact on TEKS, maintains that verse after verse from the Bible is quoted 'verbatim' in the Constitution. Checking Scripture demonstrates quickly that this is just not so. The language and the ideas do not match. Any professor of history teaches history majors not to make that kind of mistake. "

This is not the first time that history textbooks have been radically wrong, and, in fact, textbook's have become one of the primary battlegrounds in America's culture war. In 2010, for example, a review found a multitude of similar errors in a Virginia history textbook.

3) Creationism in the classroom:

In 2005, U.S. District John E. Jones, a Republican, delivered a victory to those who want to keep pseudoscience out of the classroom. He ruled that a Pennsylvania school board could not teach intelligent design next to evolution. He stated the intelligent design "is a religious view, a mere re-labeling of creationism, and not a scientific theory."

And 1987, the Supreme Court ruled that states cannot require the teaching of creationism next to evolution.

Despite these cases, thousands of schools that received public funds are permitted to teach creationism alongside or in place of actual science -- elevating religious beliefs and casting doubt over science of evolution. (Slate created this handy map to track the phenomenon.)

In public schools in Louisiana and Tennessee, the Louisiana Science Education act and a similar law in Tennessee, allow teachers to supplement scientific theories with other materials, or discuss theories that "cause controversy" (including evolution, global warming and cloning).

Private schools, which accept tax funded vouchers, are allowed to teach creationism in states including Ohio, Indiana, Colorado, Arizona and Utah. And in Texas and Arkansas, charter schools that receive public funds use what Slate calls a "creationist curricula."

John Green's Y.A. novel "The Fault in Our Stars," which was released as a wildly popular film this summer, is the just latest banned book to make headlines. The book was removed from the shelves of Riverside Unified School District in Riverside, California, after a parent complained about the books language, sexual content and plot line dealing with mortality was appropriate for those ages 11 to 13.

"A challenge is an attempt to remove or restrict materials, based upon the objections of a person or group," the American Library Association explains of challenges filed to remove books. "A banning is the removal of those materials. Challenges do not simply involve a person expressing a point of view; rather, they are an attempt to remove material from the curriculum or library, thereby restricting the access of others. As such, they are a threat to freedom of speech and choice."

Jeff Smith, author of the book "Bone," which made it onto the 2013 top 10 most challenged books told the Washington Post:

"'Nobody is doing this to be mean,' says Smith, whose 'Bone' received ALA challenges claiming 'political viewpoint, racism, violence.' ;They are doing this because they honestly have concerns that are important to them.

"'But the point is not the problem with the books –the point is access to the books. … ,' continues Smith, who notes that as a kid, comics like the sometimes-political 'Pogo' stoked his interest in reading. 'Don’t take away that option … and our First Amendment rights.'"

"The Fault in Our Stars" joins "Captain Underpants," Toni Morrison's "The Bluest Eye," "The Perks of Being a Wallflower," "To Kill a Mockingbird," "Harry Potter" and many others, which have been banned over the years.