California makes history by banning plastic bags: Here's what we should take on next

Banning plastic bags is a good start. Cutting down on these other wasteful products would be even better. 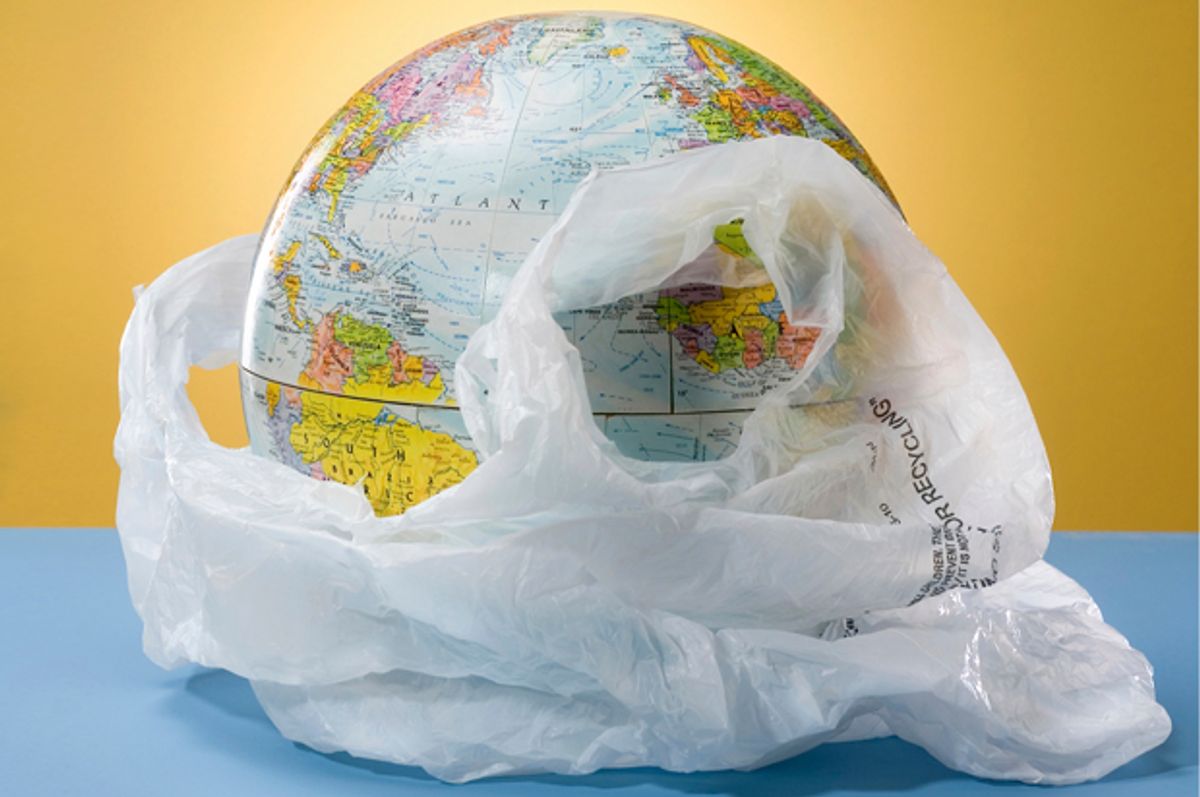 Single-use plastic bags are officially illegal in California, marking the first time an entire state has managed to pass through a ban. Starting in July 2015, plastic bags will disappear from grocery stores; a year later, the same will be true in convenience stores and pharmacies. For a 10-cent minimum fee, customers who forgot their own reusable bags can cart their wares in a recycled paper or a reusable plastic bag instead.

The ban is a clear victory for environmental stewardship, but that hasn't stopped some from arguing otherwise. The American Progressive Bag Alliance, the industry group that lead the opposition, insists that getting rid of plastic bags will end up harming the environment. Writing for Bloomberg View, Adam Minter points out that we throw out a lot more of other things, like food and furniture, and contends that the bill's impact will be mainly symbolic.

I don't think it makes much sense to debate whether targeting plastic bags, specifically, is the best use of environmentalists' efforts; anything that's both disposable and non-biodegradable deserves to be rethought. Plastic, as a whole, accounts for 13 percent of solid waste generated in the U.S., and only 9 percent of it gets recycled. Some 10 metric tons of plastic fragments are carried to the Pacific Ocean each day from the Los Angeles area alone. And while plastic bags may not be the biggest source of our major plastic pollution problem, they're a significant one. The U.S. goes through about 100 billion of them each year; California, 13 billion. The ban, proponents say, will save the state $25 million in cleanup costs.

The thing about plastic bags is that they tend to hit a nerve, enough so for bans and taxes to be successfully implemented across the country. Perhaps it's because of the way they're so thoughtlessly overused -- most check-out clerks don't even bother to ask anymore before bagging purchases. California's ban sets a new precedent by recognizing the extent of the problem, along with its underlying absurdity. As Alex Padilla, the state senator who authored the legislation, put it, “A throwaway society is not sustainable."

But naysayers who argue that the focus on plastic bags is myopic have one thing right: they're but one byproduct of our litter-producing, ocean-destroying culture. And so the question shouldn't be, "Why plastic bags?" but rather, "What can we take on next?" While we're waiting on zero-waste supermarkets to take off, here are a few suggestions for where we can start:

Some 47 million gallons of oil are used each year to produce plastic water bottles, which then turn around and add 1.5 million gallons of plastic waste to the environment (only 20 percent of which will end up getting recycled). San Francisco's already taken this on: In March, the city banned the sale of plastic water bottles on city property. Aside from the oil, plastic and, yes, water, it'd save, targeting these products also means taking a stand against the bottled water industry, which has scammed us all into thinking they're providing us with a necessary product. For those of us fortunate enough to live places with clean tap water, they are not.

Critics do raise one important point, which is that banning water bottles will backfire if it just drives people to buy more bottled soda; that's still wasteful, and bad for public health. But it's not the inevitable outcome. It will be interesting to watch if San Francisco's ban, which goes into effect October 1, eventually leads to a culture shift in which the "burden" of having a reusable bottle on-hand becomes as second-nature as the impulse to buy something you could have for free.

One of the most pernicious forms of plastic pollution is the one we can barely see. But the world's been coming to the dawning realization that "microbeads" -- those tiny bits of plastic found in face wash, soap and even toothpaste -- are piling up in our rivers, lakes and oceans. After a team of researchers dredged up 17,000 microbeads per square kilometer in Lake Michigan, Illinois banned the manufacture and sale of all products containing them; California, Minnesota, Ohio and New York are all considering similar moves.

Every so often, an innovation comes along that manages to change the way we consume coffee -- and adds a brand-new pollution problem to the mix. The K-cup, a single-use pod that brews coffee (and soon, instant soup) through its own designated machine, is one such product.

As an ultimate testament to our preference for convenience over all else, these little, nonrecyclable and nonbiodegradable pods of plastic and tinfoil are becoming incredibly popular. (You can sort of recycle them if you're really, really determined, but that kind of kills the time-saving aspect.) In 2013, Americans shelled out $3.1 billion for coffee pods, only half the amount we paid for traditional roasted coffee. (The pods also happen to be crazy expensive). The total number of K-cups produced last year could circle the equator 10.5 times. Now picture all that bobbing in the oceans, and can start to get an idea of the true cost of a three-minute cuppa.

When cell phones and computers become obsolete, they become what's known as "e-waste." The U.S., in 2012, produced more than 10.5 million tons of the stuff, and we still haven't totally figure out what to do about it, aside from sending it overseas or to landfills and pretending it no longer exists. The plastic within electronics can be prohibitively expensive to recycle, and it's only one of the potentially toxic components that threaten the health of the environment and of the people -- usually in developing nations -- tasked with extracting them. It's a problem in desperate need of a solution. As a start, the EPA recommends avoiding waste by giving your still-usable electronics away to someone who can, well, use them.