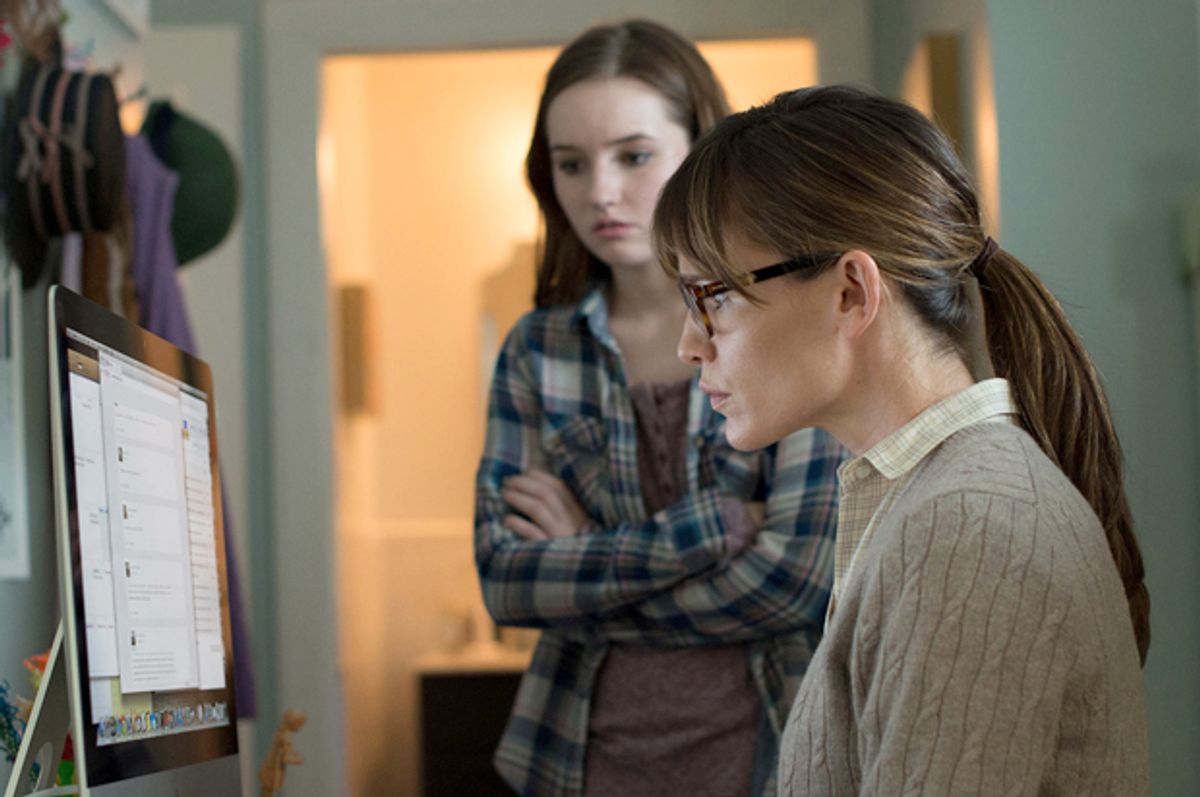 People like me frequently complain that Hollywood no longer makes movies for adults. Then a studio comes up with something achingly sincere and earnest like Jason Reitman’s “Men, Women & Children,” which feels like an ABC After-School Special teleported into the 21st century, and we can only wish they’d get back to muscular dudes in tights and CGI explosions. There’s already a provocative and highly contemporary grown-up movie on the docket this week – David Fincher’s “Gone Girl,” mixed bag though it is – so there’s no point getting greedy. One of the oddest things about “Men, Women & Children” (and there are lots of odd things to observe) is the way its perspective appears to belong to an older, stodgier and entirely clueless generation. At least officially, that’s not true. At 52, Fincher is a full 15 years older than Reitman, who is actually one of the youngest A-list directors in Hollywood. But age, as they say, is just a number.

If I’m using the term “concern troll” correctly (I, too, am older than Jason Reitman) then this entire movie is a gigantic concern troll, reaching its apotheosis in the mega-troll character played by Jennifer Garner, a worried suburban mom with spectacles and sensible hair who monitors every keystroke of her teenage daughter’s online activity, deletes all incoming messages from boys and unfriends everyone who strikes her as a potential future pervert, no matter how much they may resemble a 13-year-old Scrabble-playing Goth girl. Because, you know: the Internet! You’ve heard of it, right? This movie definitely has, and Reitman and co-writer Erin Cressida Wilson (adapting Chad Kultgen’s novel) are here to tell you what it’s really like. Did you know that people use the Internet to cheat on their spouses, arrange dates with hookers, try out alternate identities or play role-playing games with “friends” they don’t actually know for hours at a time? Stay tuned; the revelations keep on coming.

Just to be clear, I do understand that Garner’s character, Patricia, is meant to be overreacting, and to be driving away her faintly alienated daughter, Brandy (Kaitlyn Dever), by doing so. Late in the movie – I wouldn’t lie about this, people – Patricia finds herself weeping in a hospital corridor, confronted with the evidence of what a panic-stricken and mistrustful harridan she has been. But her whole story arc is treated with po-faced gravity; we’re supposed to empathize with her struggle and tut-tut her at the same time, even though she is pretty much a live-action version of that lady on “The Simpsons” who always exclaims, “Why doesn’t anyone think of the children?” At least Patricia has not fallen down the same dark Internet pit as her neighbor Joan (Judy Greer), a perky single mom who is basically whoring out her hot cheerleader daughter (Olivia Crocicchia) as a lingerie model on their super-fun private website. Hey, it’s all going toward the college fund!

By now I guess you’re getting the picture that lack of ambition and lack of scale are not the principal flaws of “Men, Women & Children.” Numerous other reviewers have already compared it to a “Crash” of the Internet age – meaning the Paul Haggis Oscar-winner, not the David Cronenberg car-sextravaganza, sadly – and it’s every bit as dire, heavy-handed, self-congratulatory and overwrought as that sounds. It’s partly teenage social realism, midway between a John Hughes movie and Larry Clark’s “Kids,” partly a lecture from somebody’s mom about how no one talks to anyone anymore, dammit, and partly an “ironic” reminder that love can go wrong in so many, many ways. Despite all the IMs and Facebook posts and Snapchats and whatever the hell else we see appearing on the screen (with soundtrack bloops and blips and clicks to match), several of the overlapping story lines have little or nothing to do with Internet culture.

For instance, the cautionary tale of an anorexic and unhappy cheerleader (Elena Kampouris), desperate to lose her virginity to a doltish BMOC, could just as easily be set in 1984 as 2014, and comes off like an afterthought anyway. By far the most appealing subplot is the budding geek-romance between Brandy and recovering jock Tim (Ansel Elgort), and despite Patricia’s ludicrous efforts to drive them apart with fake IMs -- and a plot twist involving a secret Tumblr account -- it’s a tried-and-true misfit love affair repeated in any number of high-school movies. Prize for the weirdest subplot goes to Adam Sandler and Rosemarie DeWitt as the mismatched partners in an unhappy marriage. Those two actors are so different that it almost pays off, but the whole episode devolves into a bizarre infomercial for the cheaters’ dating site Ashley Madison, which successfully connects DeWitt’s character with Dennis Haysbert for a scene with some genuine erotic smolder, a quality otherwise altogether absent from this film.

In fact, the fairest thing to say about “Men, Women & Children” is that it contains numerous elements that almost work, or that might have worked if the whole endeavor weren’t concerned with wagging its finger at us and intoning that the Internet has changed everything, while failing to prove that it has changed much of anything. Except, you know, the specifics of communication technology and the introduction of certain abbreviations. FTW! I liked Elgort and Dever as the young lovers, and I always enjoy Judy Greer even though she gets shamed as slutty Porn-Mom here (to be clear, one could question her character’s judgment but she doesn’t do anything illegal). DeWitt is one of the finest actresses in American movies, and is always playing real emotion in every role she does. At the opposite extreme, Emma Thompson is often amusing as the movie’s disembodied narrator, intoning snatches of obscene teen dialect in plummy Oxbridge tones.

But the pain! The pain is extreme. Cluelessness about the complexities of human emotions compounded by cluelessness about technology, and aggravated by an aggressive desire to seem up-to-date: It all adds up to a lecture delivered in the Peanuts-parents squonk-voice, from someone much too young to be willingly wearing those mom-pants. Jason Reitman’s career path has rapidly become uninteresting, after starting out with considerable promise: First “Thank You for Smoking,” then the era-defining “Juno” and then the Oscar-nominated George Clooney vehicle “Up in the Air.” I’m not saying those were perfect movies, but each was worth watching on its own terms, and they indicated a young filmmaker trying to walk a fine line between literary-minded indies and the Oscar-friendly mainstream. But with “Men, Women & Children” and the equally laborious “Labor Day,” Reitman has gotten trapped amid the crumbling edifice of Hollywood. It’s turning him old before his time.