Scott Walker's new problem: How Michelle Obama could turn the race against him

Dems need to work the base while shaving GOP edge with suburban, rural voters. Here's how the first lady will help 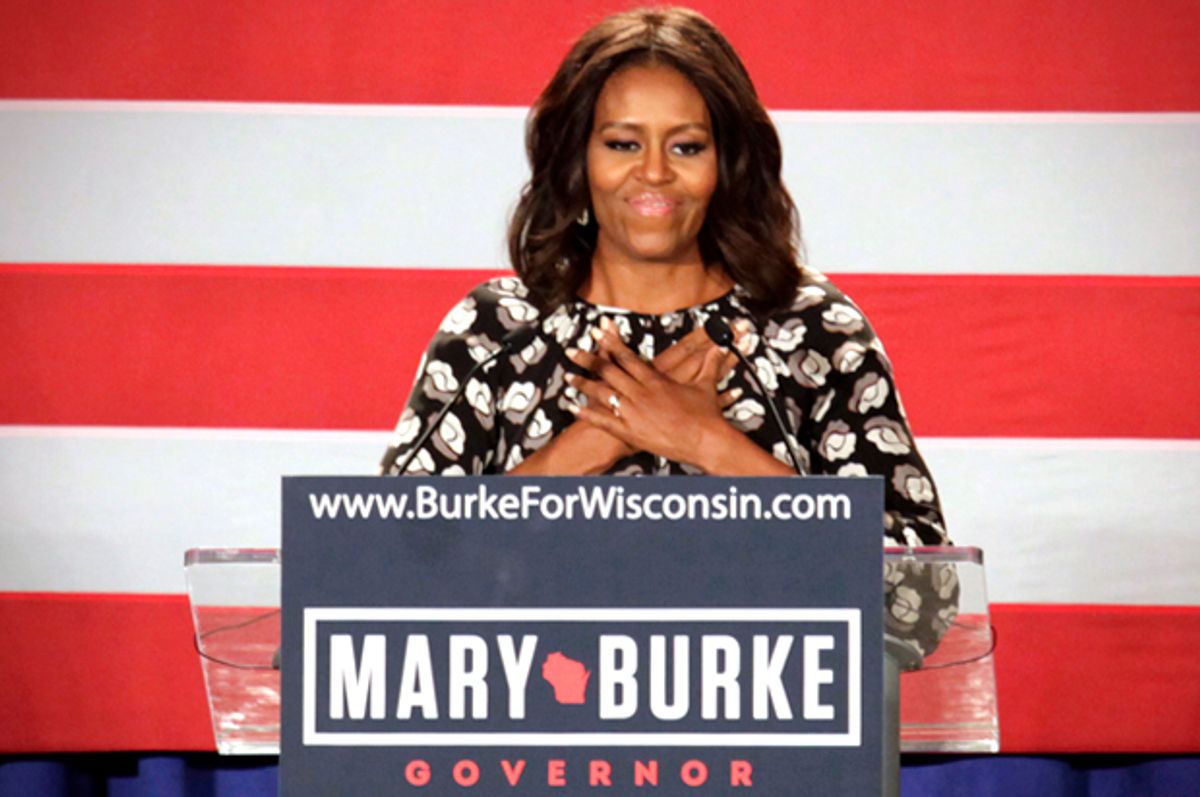 MILWAUKEE -- Democrat Mary Burke has one big advantage in running against Gov. Scott Walker: She’s not the mayor of Milwaukee, so Walker can’t run the divisive, racialized campaign against Wisconsin’s largest city – a staple of Republican politics here going back to the 1960s – that he relied on to survive a recall race against Milwaukee Mayor Tom Barrett in 2012.

On the other hand, Burke’s lack of ties to Milwaukee has raised the question of whether an affluent white business owner will be able to turn out the Democrats’ urban and non-white base on Nov. 4 in sufficient numbers to beat Walker.

First lady Michelle Obama attempted to answer that question Monday with a passionate campaign appearance for Burke, the first time she’s stumped in a 2014 governor’s race, with Democrats fighting to hold the Senate. “I love Mary Burke!” she told the heavily African-American crowd, and she said it again for emphasis. “I love her!”

Meanwhile, New Jersey Gov. Chris Christie was appearing with Walker in Hudson, Wisconsin – far from the state’s major media markets – prompting lots of Twitter jokes about whether the two scandal-dogged governors were sharing legal strategies. No love was expressed.

The first lady's appeal on behalf of Burke was warm and personal. She shared stories of Burke mentoring two young local boys, serving on the board of the Madison Boys and Girls Club and starting an educational foundation to help at risk kids go to college. "She has been such a passionate champion for our kids and families here in Wisconsin,” Obama told the crowd.

She also played the Obamas’ unique Wisconsin card, as the mostly white state went heavily for the Illinois senator in the 2008 presidential primary against Hillary Clinton. Wisconsin’s blend of urban black voters and white college-educated liberals proved to be the campaign’s ultimate weapon that November, too, and Democrats here would like to turn out the same coalition, in the same numbers, for Burke.

“You have been here with us from the very beginning,” Obama told the crowd -- since the days when the campaign was “talking about hope and change … and getting fired up and ready to go” – a summary of the 2008 pitch to those two constituencies.

Burke needs those constituencies, and then some, to defeat Walker. In 2012, 74 percent of Milwaukee’s voters turned out, which was higher than the national average of 60 percent turnout in urban areas. The Burke campaign wants that kind of turnout, which could be hard to achieve, especially in the wake of an appeals court decision reinstating the state’s new voter ID law, which could disenfranchise as many as 300,000 voters who don’t have state-approved identification. Most of them are Democrats, and that’s the point of the GOP’s voter-ID crusade since Obama was elected in 2008.

The race remains incredibly close: Among likely voters, crucial in a typically low-turnout midterm race, one recent poll showed Burke ahead, but the last one showed Walker with a slight edge. The Milwaukee Journal Sentinel’s reliable political reporter, Craig Gilbert, noted that the Democratic base seems as fired up as the Republican base, a plus for Burke. Walker’s polling margin in the white north and west precincts of the state is much smaller than it was this close to Election Day in 2010 or 2012, indicating that Burke can pick up some votes in those GOP-friendly areas.

Yet Burke can’t win without turning out the party’s most loyal voters in Milwaukee, and that’s where the first lady came in. She talked about the country’s declining poverty rate among children, its rising high school graduation rate, the falling numbers of uninsured thanks to the Affordable Care Act, a pitch crafted for her audience.

And she talked about the danger to all of those constituencies when Democrats don’t vote. Acknowledging the effect of money in politics, she pointed out the GOP “had plenty of money back in 2008 and 2012 – and we still won the election because we showed up to vote. That’s how Barack won … But when we stay home, they win.”

Burke heads to Green Bay Tuesday morning, and I’ll go with her. It’s a region that Walker won by 23 points during the recall in 2012; now he leads by 14. That’s the kind of place the Democrat needs to cut into Walker’s margin, while also turning out near-2012 levels of Democratic voters in places like Milwaukee. Michelle Obama’s visit helped her with one side of the equation.

We’ll see whether it also inspired a backlash from the state’s far-right racist precincts. The website of right-wing radio host and blogger Charlie Sykes, author of the tract “A Nation of Moochers,” has been known to call the first lady “Mooch,” short for the common wingnut nickname of “Mooch-elle” bestowed by Rush Limbaugh.