Stop telling women not to "take things personally": Ed Champion and the plague of gendered criticism 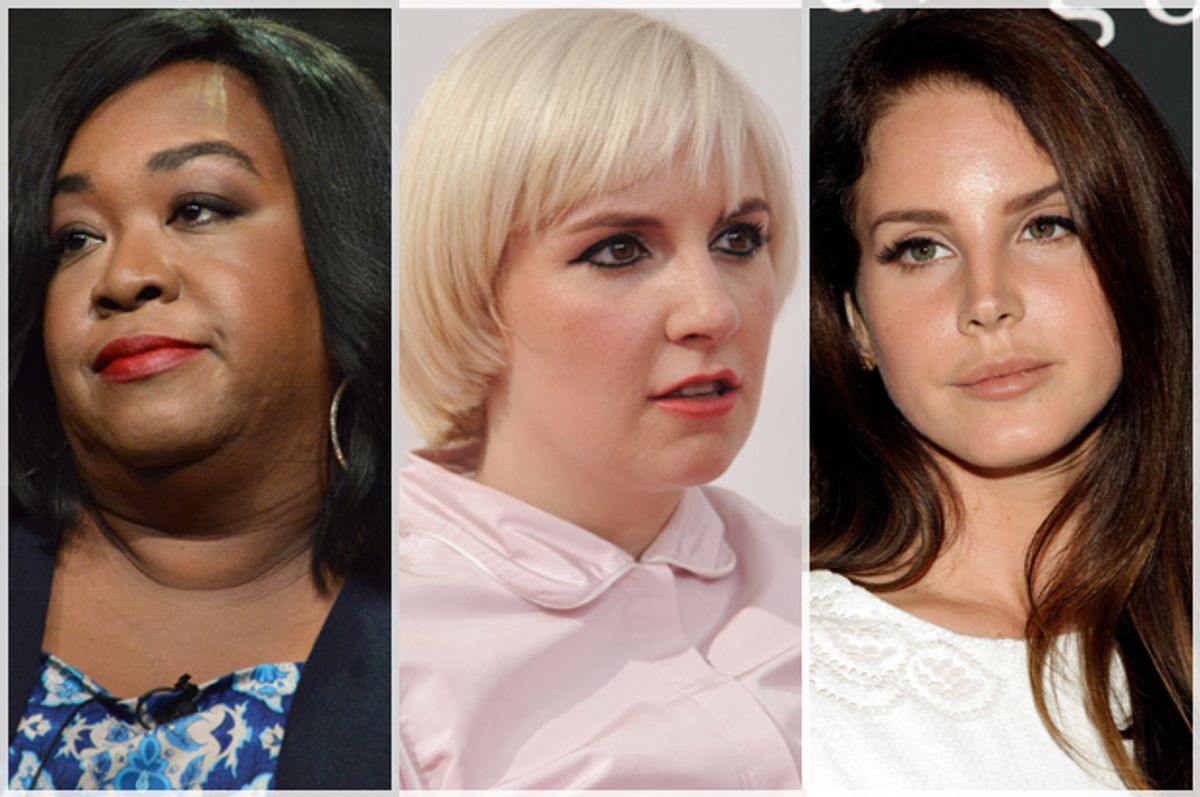 This past Saturday, the New York Times published a piece called “Learning to Love Criticism,” by Tara Mohr, a self-help author whose forthcoming book is called "Playing Big: Find Your Voice, Your Mission, Your Message." In the piece, Mohr revealed the results of a study undertaken by the linguist/entrepreneur Kieran Snyder and published by Fortune magazine. The study looked at performance reviews as a window on how criticism in the workplace is often indelibly gendered; as Snyder recalls in the Fortune article, it was inspired by a conversation with an engineering manager who was wary of promoting an employee because she was too “abrasive.” The incident, she recalled, “got me wondering how often this perception of female abrasiveness undermines women’s careers in technology.”

The results put numbers and percentages to something that most women already know — that, far more than their male colleagues, evaluation of their work is inseparable from evaluation of them as acceptable women.

“Across 248 reviews from 28 companies, managers, whether male or female, gave female employees more negative feedback than they gave male employees,” writes Mohr. She goes on to note that “76 percent of the negative feedback given to women included some kind of personality criticism, such as comments that the woman was ‘abrasive,’ ‘judgmental’ or ‘strident.’ Only 2 percent of men’s critical reviews included negative personality comments.”

Mohr’s NYT piece uses the study as a jumping-off point to discuss the way that women are socialized to take criticism personally, and goes on to offer tips on ways to “retrain our minds to expect and accept” this slanted state of affairs. The piece itself has excellent intentions, but its central conundrum — isn’t it hard for women to not take criticism personally when when criticism toward women is, itself, so personal? — seems to go unanswered.

But that question resonates this week in particular. On the Friday night before Mohr’s piece was published, a man named Ed Champion was having a meltdown on Twitter because he felt that his own criticism had been disrespected. Champion, a self-styled book critic who hosts the long-running lit podcast Bat Segundo, was angry at his friend, the author Porochista Khakpour, apparently because she had deleted a nasty comment Champion made on her Facebook page about another writer. Instead of doing what most literary types would do and simply stewing, and possibly subtweeting, about the slight, Champion made the decision to, instead, blackmail Khakpour into apologizing by threatening to release sensitive, sexualized information about her.

“If @pkhakpour does not apologize to me before 11pm, I will reveal the name of the man who photographed her,” Champion tweeted as followers of the two looked on in horror. 11 p.m. arrived. She didn’t apologize. Champion followed through on his threat. By the next night, thanks to swift reporting by concerned onlookers and friends of Khakpour’s, his Twitter account was suspended.

This wasn’t the first time Champion had threatened people, male and female alike, who disagreed with him; many of those who have had interactions with him, online and off, over the years have inspired his ire, his insults and threats, and the sense that his critical eye borders on the obsessive. As Laura Miller pointed out here in her piece on Champion, his logorrheic loathing for anyone he deemed unworthy of their success was equal-opportunity. But it’s in his criticism of women writers that Champion has recently been proudly, unsettlingly monomaniacal, and his threat to Khakpour seemed to represent the apogee of his belief that no woman should question his criticism. (Full disclosure: I had only the briefest of interactions with Champion a year or two back when I had a small quibble with something he’d written; after a few tweets back and forth, he emailed me a screed that was discomfiting, but nothing approaching inappropriate.)

Many people first heard of Champion last June, when he published an 11,000-word essay on his blog (the aptly titled EdRants) titled “Emily Gould, Literary Narcissism, and the Middling Millennials.” The piece was a breathtakingly misogynist takedown of what Champion views as self-absorbed female writers who, in his words, “have been harming the literary clime with their relentless pablum for at least a good year, actively encouraged by hoary outlets like n+1, The Awl, The Nervous Breakdown, The Rumpus, and The Millions, all quietly hoping that this confluence of cheerleading and seductive reductionism will enlarge their cultural influence.” The main problem he saw with a new generation of female writers and online publications — but, in truth, mostly Gould, about whom he was unnervingly specific and graphic in his ire — seemed to be that a) they spent too much time on social media, and b) they were far more successful than Champion himself.

The bloated obsessiveness of the piece (11,000 words on someone you claim isn’t worth any attention at all), the hypocrisy of Champion’s complaints (how dare Gould have a business called Emily Books, charged the author of a blog titled EdRants), and the creepiness of his fixation on Gould set off what the Daily Dot called “The Great New York Literary Subtweet War of 2014.” Within a few days, the man who had castigated Gould for “playing the victim card” was threatening to throw himself off a bridge because of the blowback his essay had garnered.

Admittedly, it’s easy to reduce the milieu in which this sort of criticism happens — the somewhat rarefied and largely white, middle-class and overeducated New York publishing world — to a knowing eye roll. All that insecurity, all those fragile egos and obsessive comparisons of book advances; of course it’s going to make for infights and bitter rivalries. Likewise, Champion’s self-pitying behavior when he himself is criticized (after being suspended from Twitter for the threats against Khakpour, he again alluded to suicide) complicate a discussion about his style of critique; I’ve seen some speculation that he may suffer from borderline personality disorder or other mental illness. Still, in light of Tara Mohr’s NYT piece, it seems worthwhile to discuss why Champion’s overpersonal flame throwing continued as long as it did. It was obnoxious and it was startlingly inappropriate — and it was also, in some ways, a more intense form of the criticism that women are expected to brook in most of their creative endeavors.

Snyder’s study pointed out how women’s personalities and women’s work are conflated  in the workplace, but that conflation is also on view in countless creative spheres. The unwillingness to acknowledge women's skill at portraiture is a theme that’s been repeated for years in the realm of literary fiction, where men who take on sprawling domestic novels are seen as heroes for tackling universal topics, while women who do the same are simply writing what, in Jonathan Franzen’s 1996 Harper’s article “Perchance to Dream,” his friend David Foster Wallace described as “tribal” books that were only of interest to others in their tribe. In television criticism, female show runners like Mindy Kaling, Shonda Rhimes and Lena Dunham are often assumed to be simply putting themselves on-screen rather than thoughtfully writing their characters. In music, double standards abound; Meredith Graves of the band Perfect Pussy recently gave a stinging talk on the female artists, like Lana Del Rey, who are excoriated for their “fakeness” alongside male ones, like Andrew WK, whose personas comes under no such scrutiny. (“Real women with fake names are somehow considered exponentially less authentic than completely fake men harboring a real, hidden sadness.”) And in art, countless women have been erased from history, or appended as a minor footnote, because it was assumed that they were hitching their wagons to their gallery-star male partners.

As bestselling—and much-maligned—author Jennifer Weiner pointed out on Twitter yesterday, any female writer of literary fiction can regularly expect to be reviewed alongside, if not in place of, her work. Champion’s piece, she noted, “was written in a specific context in which it's acceptable for mainstream critics to review not just a book, but its author,” wrote Weiner, following up with a series of suggestions for remaining mindful of this slant. “When you see a critic say, ‘It's impossible to review Female Author's new book without discussing her life,’ ask — really? .... When you see something — 'review or 'close reading' that's about author, not book, where quotes aren't from text but the author's blog … say something. Examine your own assumptions, and the reviewer's. Believe in women as authors, not just stenographers of their own lives.”

It may be true that women take criticism harder; as Mohr points out, we are socialized to be people-pleasers and boat-levelers, which often translates to a sense that mistakes are costly and that doing nothing is safer than failing. In the April 2014 Atlantic cover story that reported on the “confidence gap” between men and women, the Stanford psychology professor Carol Dweck noted that her studies of grade-school boys and girls found that, when it came to criticism, “Boys’ mistakes are attributed to a lack of effort,” while “girls come to see mistakes as a reflection of their deeper qualities.”

That said, I don’t know a single woman who doesn’t appreciate criticism of her work that really, truly is criticism — not a dig at her personality, not a referendum on her hair and clothing, not a word like “abrasive” that’s code for “insufficiently feminine.” And my sense is that often women take legitimate criticism well because we’re so used to having all that other stuff dragged into it that it’s a relief when it isn’t. But regardless, I’d be interested to see more study of how all sexes handle criticism — because if the Internet holds any kind of clue, taking things personally is hardly the realm of women exclusively.

But until that happens, I’ll remain skeptical of Mohr’s call to “retrain our minds to expect and accept” gendered criticism. In a not-yet-post-feminist world, she’s putting the onus on women to agree to a sexist status quo. And from the workplace to the realm of individual creatives, that’s not a sustainable solution.

Emily Gould agrees. “Gendered criticism has a silencing effect, not just on the women criticized, but on all women who come into contact with it. I can't tell you how many people have said to me, ‘I'm so glad I'm not published, that my writing is a hobby, so I don't have to deal with this’,” she says — “this” encompassing everything from a sniffy aside in a review about an author’s social-media presence to a bloody-minded threat to ruin a woman’s life from Ed Champion. Addressing Champion’s latest threat, Gould notes that “Every time something like this happens, some women’s ambitions get curtailed and quashed and discouraged, by both the thing itself and the culture's reaction to it. And that's the thing that keeps me up at night, not that one crazy man thinks I shouldn't be writing.”

Mohr closes her piece by noting that contemporary women “inhabit a transitional historical moment.” I’d argue that it’s not just women, but all of us who do. Part of creating a humane future involves examining the ways we think about criticism and gender, insight and bombast, discussion and incitement, and agree that in both the dishing and the taking, we all have plenty to reckon with.