California just entered its fourth year of drought: Why things could soon get much worse 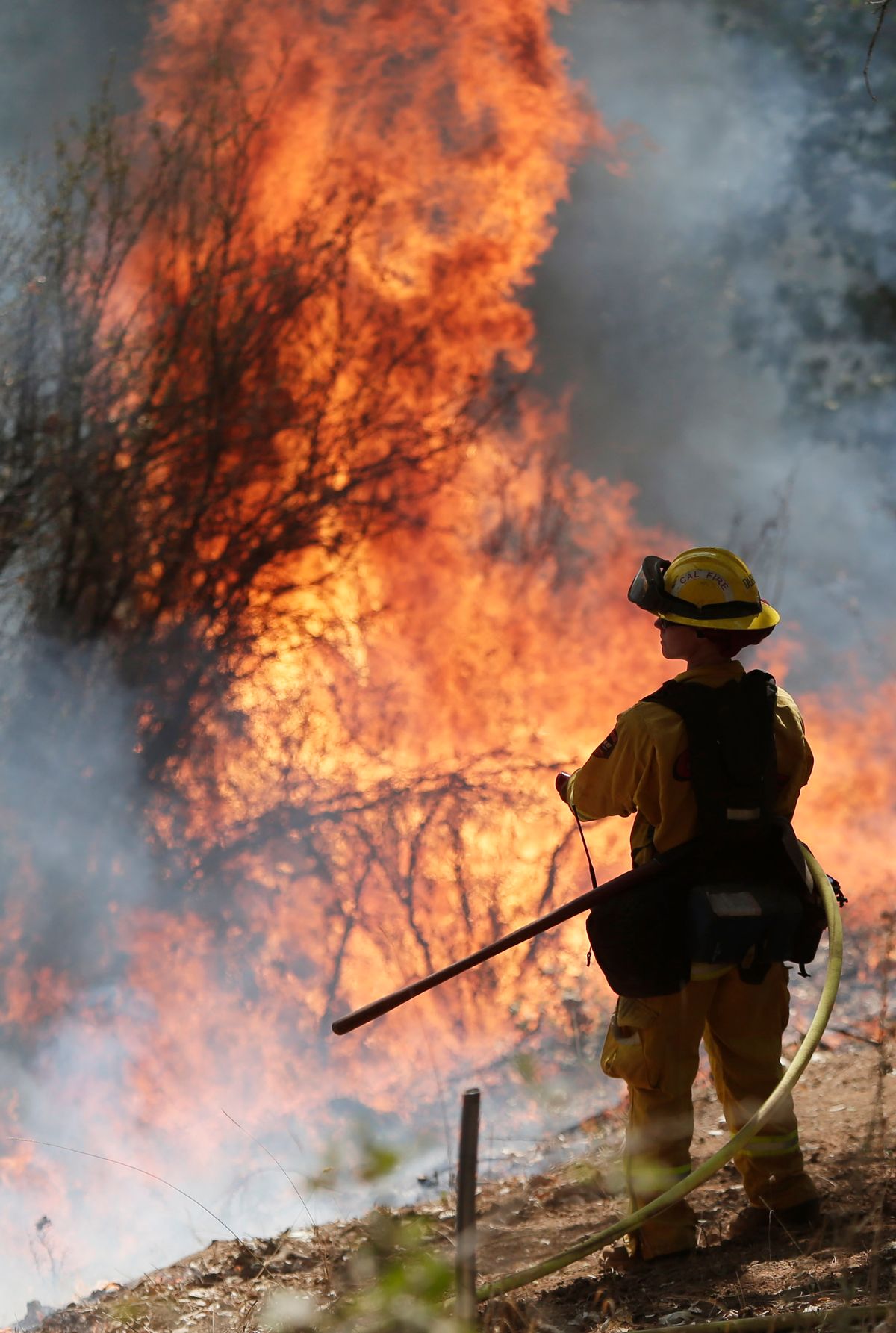 Flames from a controlled burn engulf a hillside as a firefighter watches while fighting the King Fire on Tuesday, Sept. 23, 2014, in Mosquito, Calif. Strike teams from Fresno and El Dorado Cal Fire worked in conjunction with department of corrections crews in an offensive firing tactic, intended to take away fuel from the main fire. (AP Photo/Marcio Jose Sanchez) (AP)
--

Like the Jewish calendar year, California's water year has come to an end this month. Wednesday, the state entered its fourth consecutive year of drought. It wasn't a particularly happy new year. With less than 60 percent of the average precipitation, 2014 was officially the driest year on record since 1977; before that, only 1924 and 1931 were drier. The alarming situation, in the latest update from the U.S. Drought Monitor, looks like this: One hundred percent of the state remains in drought conditions, and the bad news keeps coming. The fall harvest, from grapes and almonds and beyond, was smaller than usual, with revenue losses and high water costs combined costing the agriculture industry some $2.2 billion. Pumpkins are ripening too early. The dairy, golf, beer, rice, ski and shadow marijuana industries are all at risk. Endangered salmon are in trouble. The state's run through its budget for fighting wildfires. A growing number of communities face the prospect of having no water left in just two months' time. Lake Oroville, California's second-largest reservoir, is only 30 feet away from its record-low level:

Scientists, meanwhile, are beginning to report that they've identified hints of climate change in the drought. The science remains unclear (per Climate Central's John Upton, "murky as muddy water in a nearly parched lakebed") but of three studies attempting to detect the influence of climate change on the drought, one, a Stanford study funded by the National Science Foundation, found a direct link between the two.

Despite the increasingly worrisome signs, most Californians are only experiencing modest effects of the drought, the L.A. Times reports. It adds, "another rainless winter would probably change that." That cry's being echoed in most  coverage of the drought. And unfortunately, it may be just what we're looking at. Uncertainty reigns, but it's not looking nearly as likely as it once was that an El Niño will come along, and if so, experts doubt whether it will be strong enough to replenish the state's dwindling water supply. State climatologist Mike Anderson told KQED that somewhere in the range of 150 percent of normal precipitation would be needed to end the drought.

If things don't turn around this winter, the strategies used to stave off the worst for now could end up make things tougher in the coming year. "One of the reasons that agriculture hasn't done worse this year is because of the tremendous amount of groundwater withdrawal that took place," Mark Cowin, director of the California Department of Water Resources, told the Times. "That's essentially borrowing on tomorrow's future. We'll pay that price over time."