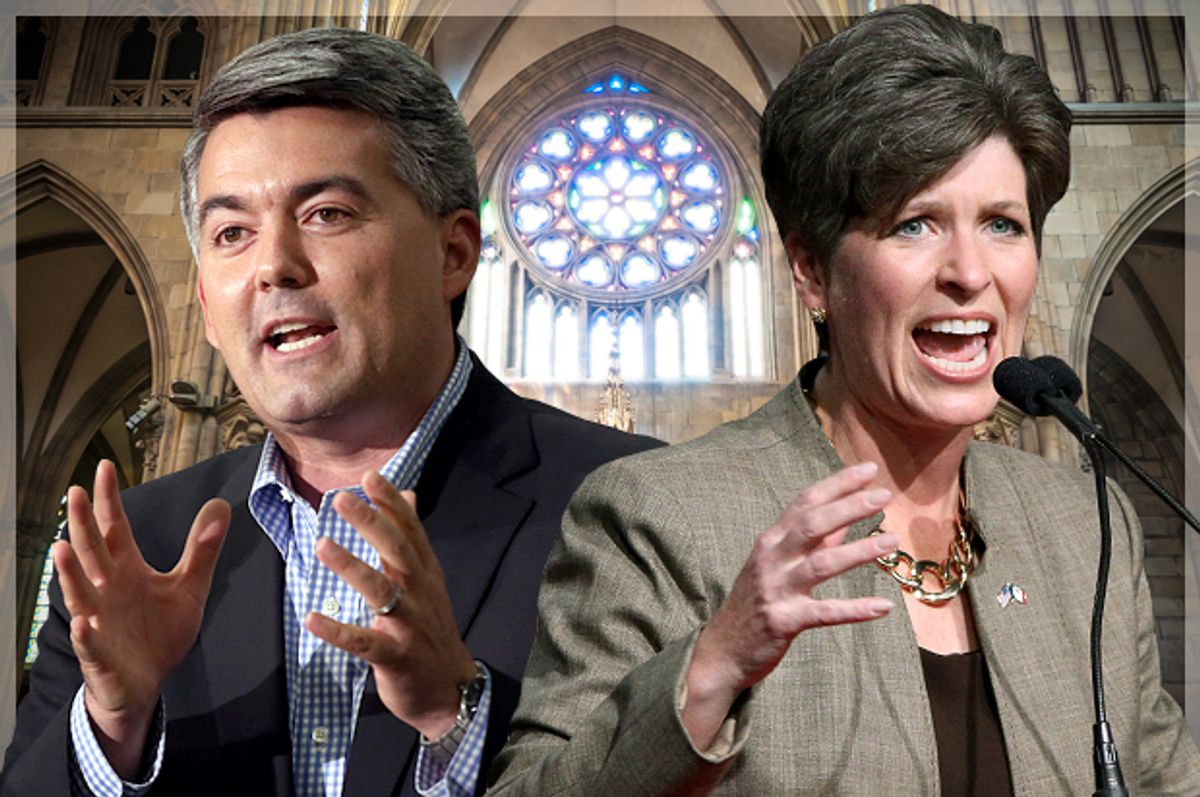 The change in mainstream cultural norms regarding LGBTQ people and same-sex marriage has been so dramatic, it can be hard to remember that the Republican Party's last successful national campaign not only relied quite blatantly on homophobia, but did so relatively recently, in the presidential election of 2004. Back then, Republicans from Karl Rove on down were more than happy to embrace the über-religious members of the GOP base sometimes referred to as "Christianists." But as the Senate races now happening in Colorado and Iowa show, in the 10 years since Bush was reelected, the relationship between Republican politicians and their Christianist base has also undergone a major change.

The Senate campaigns dominating the politics of Colorado and Iowa right now both feature Republican nominees who ideologically come from their party's hard right. Colorado's got Rep. Cory Gardner, a photogenic and talented young politician who happens to hold extreme views on all of the Christianists' biggest issues — abortion, contraception, "religious liberty" and same-sex marriage — but is nevertheless slightly ahead in his neck-and-neck race. Iowa, meanwhile, has state Sen. Joni Ernst, who is similarly radical, similarly able to mask her extremism with a smile and similarly ahead in her Senate campaign.

Yet there's one more similarity between these two respective Republicans, and it's one that may tell us a lot about the future of Christianism in the GOP: Both have previously supported — and are now desperately trying to disown — initiatives pushed by Christianist activists to add so-called personhood amendments to the constitutions of their states.

Personhood amendments, of course, are just the latest favored idea from Christianists hoping to ban abortion as well as most forms of contraception. The exact language varies state-by-state, but the gist of each amendment is to declare human life to begin at fertilization, which by extension would ban most of the practices we associate with the decades following the sexual revolution. This is an incredibly extreme position, one well outside the norm for even self-proclaimed pro-life voters, and it has been rejected repeatedly by voters. With victory so close, Ernst and Gardner are hoping to avoid a similar fate.

Perhaps because there's really nothing else to do, both candidates have responded to attacks on their earlier support for personhood by, well, lying. For example, during a recent debate with her Democratic challenger, Rep. Bruce Baley, Ernst responded to his criticism of the amendment with an extremely slippery answer. "The amendment that is being referenced by the congressman would not do any of the things that [he] stated it would do," Ernst said. "That amendment is simply a statement that I support life." As others have noted, only by the most narrow and tendentious view is this a defensible claim; it's like saying Brown v. Board of Education didn't end segregation because the Justice did not literally, themselves, enforce their ruling in Southern states.

For his part, Gardner has looked like he was playing his hand with more savvy than Ernst (one of the first things he did as a candidate for Senate was drop his support for personhood), but the consequences of a recent flubbed interview may mean that's about to change. In the interview, Gardner claimed that there was no bill in Congress to make personhood a nationwide reality. Thing is, not only is there such a bill, but on the list of co-sponsors one can find Gardner's name. "There is no such thing as a federal personhood bill," Gardner said, multiple times, to a local reporter. But wishing, hoping and demanding that an inconvenient reality should vanish doesn't make it go away.

While the chances are high that Gardner and Ernst both sincerely believe in the personhood movement's mission, the speed and conviction with which they've lied about this aspect of their worldview shows the increasingly awkward role of Christianists in the Republican Party. Although the religious right has lost much of the political power and cultural influence it had as recently as 10 years ago, it's still a major factor within internal Republican politics, and its members are still the most reliable foot-soldiers among the GOP's activist base. Yet as Americans become more progressive in their sexual politics, with support for marriage equality being the most obvious but not only example, being associated with Christianism becomes more of a political liability.

Until they resolve this political catch-22, Republicans will have to hope Gardner and Ernst can pull out their victories despite (or because of) their ham-handed attempts at obfuscation. If they do, in purple states like Iowa and Colorado, it could be a sign that the GOP doesn't have to make the wrenching decision confronting it just yet, that it can walk the tightrope between the party's past and America's political future for at least a few years longer. That would be a decent short-term outcome for Republican candidates; but I wonder how the party's Christianist base feels about being treated like the aged family member everyone wishes would just go away.