Heinrich Himmler, family man: Why "The Decent One" is the most haunting documentary I've ever seen 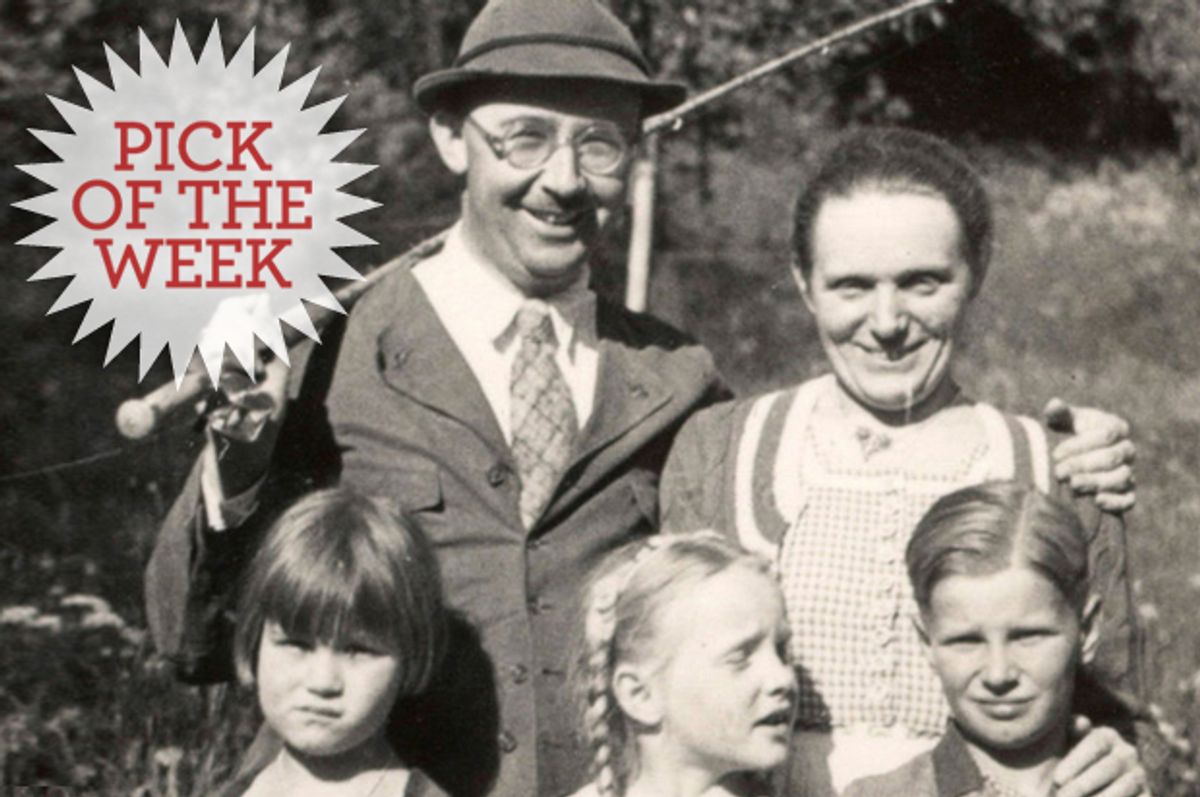 Heinrich Himmler and his family, in an undated photograph from "The Decent One."
--

Much of the history of human thought has revolved around our efforts to understand the nature of evil, which have never yielded anything like a satisfactory result. We are fascinated by serial killers and murderous dictators, torn between the obvious fact that they are human beings like ourselves and the conviction that in some fundamental way they must be different. Fictional embodiments of evil, like J.R.R. Tolkien’s Sauron or J.K. Rowling’s Lord Voldemort, are essentially reassuring because they are nothing except evil; both are built on the Satanic pattern, meaning they were once pure, but have left their uncorrupted selves far behind. Even the perversely noble Satan of “Paradise Lost,” after nine days of torture by fire, knows only one purpose: “immortal hate” and “eternal War irreconcileable” against the power of heaven.

Set against this conception of inhuman monstrosity we have the countervailing evidence, famously marshaled by Hannah Arendt under the controversial term “the banality of evil.” In latter days, many scholars and Holocaust survivors have contended that Arendt misapplied this term to Adolf Eichmann. (Most notably, the late Benjamin Murmelstein, who knew Eichmann well, told “Shoah” director Claude Lanzmann that Eichmann was a sadist and a zealous anti-Semite.) But the dispute over Eichmann’s personality oversimplifies the profound philosophical insight that lies behind Arendt’s phrase, which speaks to the fact that people who do terrible things, and who hold beliefs most of us find noxious and inexplicable, often appear to be entirely normal in other areas of life. Those Technicolor films of Hitler snuggling his beloved German shepherd (shot by Eva Braun) have always struck me as more disturbing than his long, ranting speeches. Der Führer looks like any other high-level functionary of the business or political realms, seeking an outlet for repressed emotion. He doesn’t look good or evil; he looks human.

That brings us, however reluctantly, to the subject of Heinrich Himmler, the focus of Vanessa Lapa’s devastating collage documentary “The Decent One,” and a highly viable candidate for the title of Worst Human Being Ever. As leader of the SS and head of the Gestapo, Himmler almost certainly knew more about the details of the Holocaust than Hitler did. As the private letters and documents that form the principal text of “The Decent One” make clear, he was a true believer in Nazi master-race ideology, who enthusiastically embraced the project of exterminating all the Jews in the Third Reich’s zone of control. Yet any attempt to describe Himmler as a monster founders on the mountain of ordinary domestic details. His letters home to his wife, Marga, are affectionate and playful, laden with the role-playing and in-jokes that are the inner substance of any marriage. Later on, of course, Himmler writes similar letters to the mistress with whom he had two illegitimate children – but old-fashioned bourgeois adultery is the deed of a man, not a monster.

While the cumulative effect of “The Decent One” is difficult to summarize, and some viewers have felt alienated by Lapa’s formal and structural choices, I found this film to be one of the most profoundly disturbing cinematic experiences in a life full of them. It has the slow-building nightmare force of one of Michael Haneke’s films, which have their roots (it hardly needs to be said) in the same 20th-century European darkness. Even those steeped in World War II and Holocaust history will learn things from “The Decent One,” and none of them are likely to make you sleep better at night. Himmler is not made less repulsive in this human-scale portrait; indeed, he seems more despicable than ever. But Lapa constantly confronts us with the fact that we cannot easily thrust him away as a psychotic aberration, not when he seems like such a recognizable type.

Himmler is the guy who more or less successfully compartmentalizes his family life and the unlovely details of a demanding professional career. He reads an adoring letter from his daughter, Gudrun (known as Püppi) – who at one point seems mystified by the fact that her science teacher caught her cheating on a test but did not punish her – and later that day or the next reads a secret memo from an underling discussing technical problems with the “death wagons,” the rolling gas chambers then being used to asphyxiate Jews and Communists along the Eastern Front. (I don’t want to tell you what the memo was about; I wish I didn’t know.) I’m not suggesting that oil-company executives, corporate lobbyists or predatory venture capitalists are guilty of crimes on anywhere near Himmler’s scale, but the psychological mechanism involved is about the same.

“The Decent One” is based on a trove of recently revealed material whose provenance is somewhat mysterious, although as far as I know its authenticity is not in question. Lapa’s film suggests that the Himmler family’s private archive was stolen by American soldiers, and then sold on the black market, after Himmler’s home in Bavaria was seized in the spring of 1945. The collection, which includes Himmler and Marga’s letters, Püppi's childhood diary, many other documents and numerous family photographs, apparently found its way to Israel and was held there for decades, until Lapa’s father purchased it privately a few years ago. There’s something more than a little unsavory about that history, as if the criminality of the papers’ former owners had leached into them somehow and infected future generations. I suppose it all fits together.

In the early stages of “The Decent One,” which sketch out a brief portrait of Himmler’s unexceptional childhood in a privileged Bavarian Catholic family, Lapa stitches together archival footage from many sources, most of which is simply meant to illustrate provincial German life early in the 20th century. Almost none of this early material directly pertains to Himmler (and she never claims it does), but some viewers may be confused about that. Throughout the film, she often adds an artificial soundtrack – gunshots, children’s cries, the roar of motorcycle engines – to original newsreel or archival footage that is almost certainly silent. I noticed this and wondered about it and then pretty much stopped thinking about it, but on balance it feels like a mistake, an attempt to add aesthetic immediacy to material that does not require it.

Like his future boss, young Heinrich Himmler was nothing like the ideal of blond, muscular Aryan masculinity. Childhood photos reveal a spindly, bespectacled kid, who was often ill and only moderately successful at school. There isn’t enough evidence to know whether he was bullied or abused, but Himmler certainly didn’t have the outdoorsy, athletic boyhood full of hearty camaraderie that he later prescribed for aspiring SS members. He was rejected for fraternity membership at the University of Munich, where Himmler’s diary reveals that the brothers once discussed “homosexuality and the Jewish question,” apparently a first reference to a topic that would dominate his adult life. It’s way too easy to sum up the Nazi leaders as vindictive little men trying to make up for a perceived deficit of masculinity, since that describes many people who don’t become mass murderers. (Or who just don’t get the chance.) At any rate, in Himmler’s case as in Hitler’s, the shoe seems to fit.

As a young man in the mid-1920s, Himmler joined the Nazi Party and also married Marga, a woman seven years older than he who at first seemed the dominant partner. This movie isn’t a history of the former relationship, or of the role Himmler played as Hitler’s most loyal devotee and lieutenant, and you’ll have to get that elsewhere. Marga professes no interest in her husband’s political leanings, at one point needling him: “Why do you go to a Hitler rally when you know what he’s going to say?” She ultimately joined the party too, but with that mixture of loyalty, willful blindness and self-delusion typical of Nazi wives, it’s not clear how much she ever understood about what her husband did, or his enormous personal responsibility for the Final Solution and its implementation. There’s some casual anti-Semitism in their early letters, including unsavory banter about a Jewish moneylender, but nothing remotely unusual for that time and place.

But the self-delusion was not Marga’s alone. Lapa’s title is drawn from an apparently preposterous remark Himmler made, after the war had turned against Germany and the end was in sight: “We can have but one desire as to what is said about us: these German officers, these German soldiers – they were decent.” At another point, he writes fervently about how German troops do not mistreat animals or inflict unnecessary suffering – adding, almost in parenthesis, that this cannot apply to Jews and other “subhumans,” who are below the status of animals. Part of the decency of German soldiers, in Himmler’s view, lay in the fact that many of them suffered psychological damage after committing war crimes. He repeatedly expressed concern about this problem, receiving a secret memo about a prominent general’s mental breakdown and urging that troops on the Eastern front be given free evenings full of drinking, music, theater and wholesome German culture.

There’s no indication that Himmler thought he was being a horrifying hypocrite when he recommended cabaret entertainment as therapy for mass murderers. Indeed, those were the worst parts of the film for me exactly because you can feel Himmler struggling with himself, just a little, and trying to find off the terrible cognitive dissonance of what he has done and what he claims to be. Whether she intends this or not, Lapa forces us to confront apparently incompatible truths: Himmler was a monstrous war criminal, one of history’s very worst, and he was also an apparently normal person who somehow screwed himself up to do these terrible things and suffered for it. I’m not saying he suffered enough, God knows, or that his suffering makes up for anything. But this realization forces us to recognize ourselves in him, just a little, and to recognize the small bad things each of us has done as the seeds of very big bad things.

”The Decent One” is now playing at Film Forum in New York, and opens Oct. 10 at the Music Hall in Los Angeles, with national release to follow.