It's time for our intelligence and security apparatus to stop and reflect. What it's doing now just isn't working 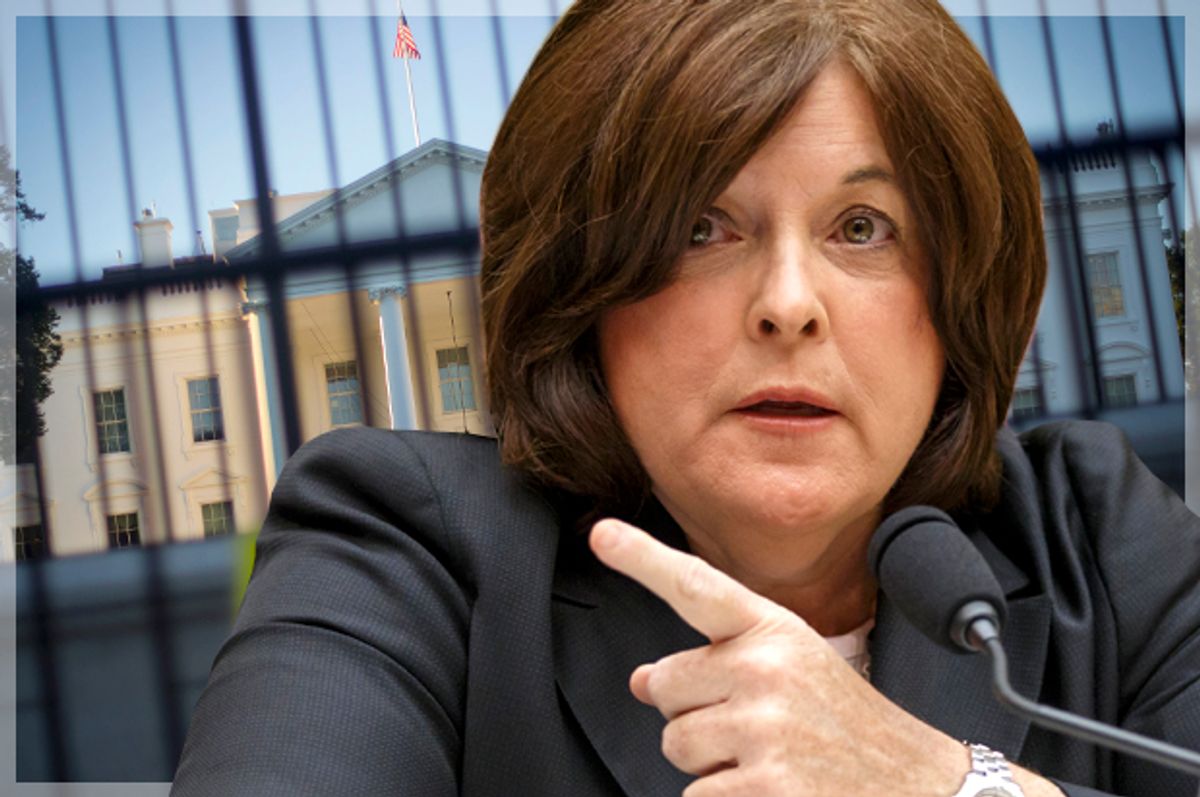 Every so often when something goes horribly wrong in the military, like it did for the Air Force back in May 2008 when they had two fatal crashes of T-38C trainer jets within nine days of each other, the commanders call for a stand-down. It offers everybody involved the chance to break out of their regular routine and think more deeply about what caused the crash.

Getting it right is not a matter of luck but of fostering a culture of disciplined accountability, irrespective of rank. Everybody has to be responsible for their actions or people die. Setting the tone comes from the top.

We need such a stand-down here at home and abroad on security and intelligence gathering. The intelligence community and the White House missed the rise of ISIS and the hollow nature of the Iraqi military. Meanwhile, the U.S. Secret Service, which protects the president, his family and the integrity of our currency, appears to be incompetent.

The latest disclosures about the Secret Service came just 48 hours after President Obama’s nonchalant assertion on "60 Minutes" that U.S. intelligence botched their assessments of the facts on the ground in both Iraq and Syria, while ISIS was gobbling up chunks of both.

By Tuesday, anonymous members of the intelligence community were pushing back, charging that the president was merely misdirecting media scrutiny away from himself, who they said was the avoider in chief when it came to confronting the rapidly emerging ISIS threat.

One can understand why the U.S. cloak-and-dagger crew are so touchy. This is the same gazillion-dollar “community” that the late Sen. Daniel Patrick Moynihan insisted missed the fall of the Soviet Union. They missed the 1993 World Trade Center attack and the 2001 World Trade Center attack, and took us to war over nonexistent Iraqi weapons of mass destruction. Between Wikileaks and the Snowden affair, it has only gotten worse. Now, according to our commander in chief, it missed this latest deadly jihadi mega-trend.

The president told Steve Croft on "60 Minutes" that Jim Clapper, the director of National Intelligence, had “acknowledged” that our best and brightest had “underestimated” the emerging Islamic State and overestimated the willingness and capability of the Iraqi army to fight them. Evidently, only half of the Iraqi combat brigades are actually up for fighting.

If the president is correct about the intelligence community, that’s not a "mistakes were made," passive voice kind of problem. It is a catastrophic multibillion-dollar systemic failure that is as clear and present a danger to our security as the terrorists. It certainly is worthy of a "60 Minutes" follow-up with the working title “Who Blew Iraq-Syria and Why?”

Since September 11th the intelligence community has gorged itself on billions and billions of dollars from taxpayers even as Congress cut food stamps and benefits for the long-term unemployed. Not since the Gold Rush days in the West has any community seen its population explode so quickly. By 2011, a decade after the September 11th attack the number of Americans with national security clearances was 4.2 million, according to the General Accounting Office, up from just 2.4 million in 2009.

Here at home the quick creation of the Department of Homeland Security by President George W. Bush, in the aftermath of September 11th, resulted in the absorption of more than 20 agencies, including the Secret Service, into a multibillion-dollar behemoth that has been a frequent target for critical GAO audits documenting waste, fraud and abuse.

Flying blind in Iraq and Syria, the U.S. went back to its only real playbook, bombing Iraq and opening up a new "we got to bomb ya to save ya" franchise in Syria. It is just so much safer from 10,000 feet.

Not long after the U.S. bombed Syria, the Wall Street Journal reported scores of civilians hit the streets in more than 40 communities in Syria to protest the U.S. bombing campaign, chanting “down with America.” USA Today said civilian casualties were confirmed by the British-based Syrian Observatory for Human Rights.

No doubt, surviving friends and family are all potential ISIS recruits. We are in this death-grip tango with these guys who are fueled by our violence as much as we are fired up by theirs.

Yes, they target civilians and we kill them "by accident." But I believe it is a distinction lost on the survivors.

Now, with the images of Syrian civilians burning American flags in response to our “surgical strikes,” that evidently took out a grain silo and killed civilians, we have to have the inner fortitude to ask if this latest bombing campaign was done in a rush to make it appear we were doing something, after the president admitted in August he had no strategy for Syria.

Much of momentum for the "we got do something" to counter ISIS movement started when American public opinion shifted from its bipartisan, non-interventionist outlook to a "we got to kick some jihadi ass" conviction. So what moved the masses?

No doubt the videotaped beheadings of two American journalists and a British humanitarian aid worker were the driver. These brutal executions were fodder for cable television, which poignantly captured the dignified and heroic lives of the victims, including their final moments on this earthly plane. We were spared no detail on their families' anguish and the loved ones they left behind.

Consider by contrast how little we know about the thousands upon thousands of innocent civilian casualties caused by this nation's global war on terror. Do we have a name or even a photo like those updates you get from “Save the Children”? Yes, ISIS and its progeny are a threat to all peace-loving people. But 13 years after we started our global war on terror we have to be smart enough to grasp what it has been in our response that has helped spawn ISIS.

While the president, the intelligence community and Congress all engage in self-serving finger pointing, sad to say, this is our government. As arrogant and self-possessed as this crop is, they work, when they do, for us. If they are ill-informed, or otherwise engaged, we have to force them to up their game by making every effort to keep ourselves informed about the world we live in.

We are the consumers of the news media, such as it is. We have to hold them accountable as well. As I wrote in this space back on the Fourth of July, if the president and/or the intelligence community took their collective eyes off the ISIS ball, so did the penny-pinching, astro-turfing, copy aggregating news media.

For years the media has indulged President Obama’s magical thinking about facts on the ground in Iraq. In October of 2011 it went along with the Obama “home for the holidays” narrative when he ordered the remaining 40,000 troops out of Iraq proclaiming “The last American soldier will cross the border out of Iraq with their hands held high, proud of their success.”

Even before the U.S. pulled up stakes, Iraqi Prime Minister Nouri al Maliki’s 2011 violent crackdown on nonviolent Iraqi Arab Spring youth protestors was sowing the seeds for the more militant reaction that now threatens the entire region. Rather than constructively respond to the youthful protesters’ valid grievances about his dysfunctional government’s self-dealing and poor public services, Maliki resorted to force. History goes on in foreign places even if we are not paying attention. Yet as the U.S. military presence waned so did U.S. media coverage and boots on the ground.

Even in this latest "60 Minutes" appearance, the president was permitted to lay out a fanciful narrative that is evidently true only in his own head, and to the sycophants around him and the reporters who crave ongoing access.

“When we left we had left them a democracy that was intact, a military that was well equipped and the ability then to chart their own course,” President Obama said. The president elected by blasting President George W. Bush for starting the war in Iraq as an incumbent helps square it all up for posterity, irrespective of the facts on the ground.

This is the kind of bipartisan cooperation and continuity that’s not in the national interest because it memorializes a phony narrative that sets us up to continue our folly. It facilitates the kind of collective cowardice we saw with Congress when they slipped out of Washington rather than do what their British peers did in the House of Commons — have a full debate on the merits of the next installment of the war on terror.

For years we have been told repeatedly that we had to settle for a certain amount of infringement on our civil liberties so that we could be safer from an attack here at home. We mortgaged our future to create this uber security complex that left the front door of the White House open.

Even as we are reassured by the war on terror cheerleaders that the trillions spent on homeland security and our global offensive have kept us safe here at home (with noticeable exceptions like the Boston bombing), the Middle East and Africa have been convulsed with violence.

In 2012 the National Consortium for the Study on Terrorism and Responses to Terrorism reported there were 8,500 terror attacks that killed 15,500 people. That was a 69 percent rise in attacks and an 89 percent spike in their lethality from the year before. Six of the seven most deadly groups perpetrating these heinous acts were affiliated with Al Qaeda.

It is a weird sort of self-perpetuating news media loop.

U.S. troops come home, the American public disengages, and the news media slips back into its infotainment, cross promotion, product placement, give the people what they want mode.

For years, car bombs went off and killed thousands of people of color in remote places with "funny"-sounding names, yet it was back to golf for America. But once the evildoers beheaded some Americans, it was time to go wall-to-wall and revert to Plan A, which looks just like Plan B, for "bomb."

It’s just how we roll.