I was always a competitive, obsessive reader, until my daughter showed me another way 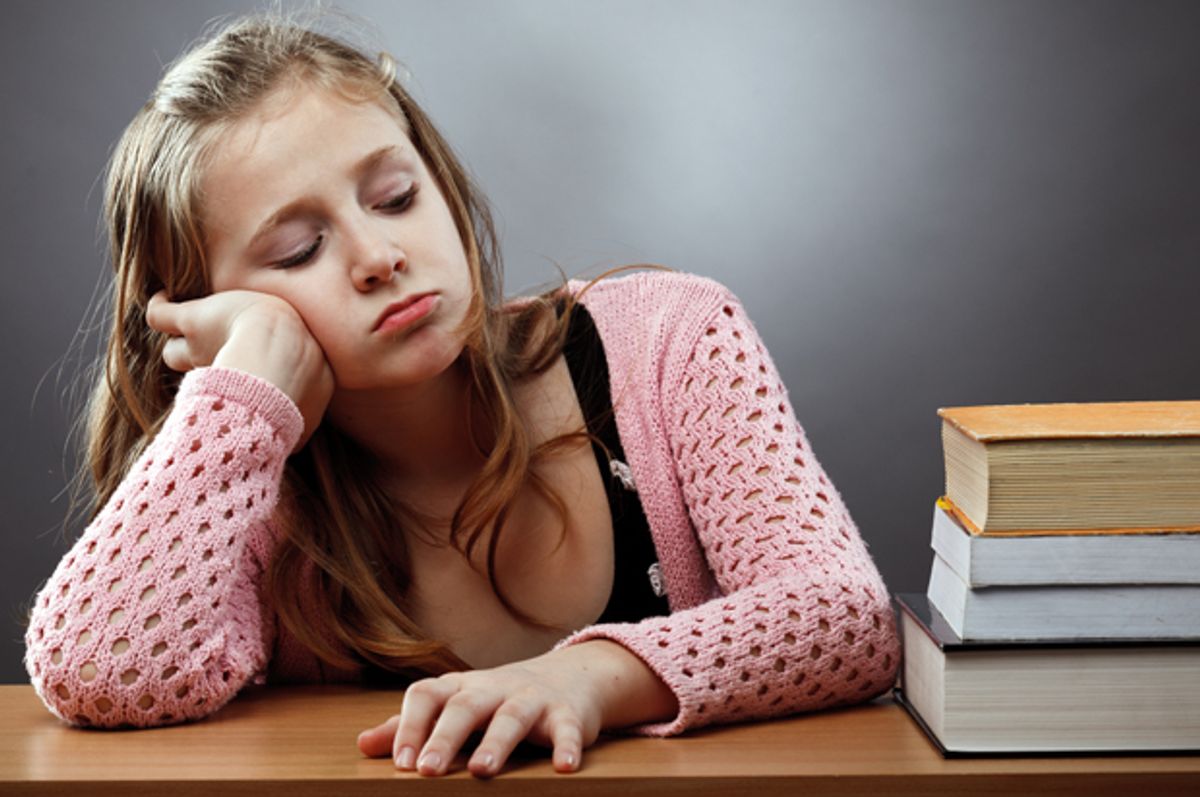 Before my daughters were born, I wondered endlessly what they would be like. Would they be princess girls, sporty girls, take-things-apart-and-put-them-back-together girls? Would they be quiet like their father or mouthy like their mom? I loved the mysteries that I carried within me. But on a few points I was certain. I had only to look at both sides of their family tree to be confident they'd be pale-skinned, high-spirited -- and obsessed with books.

Sure enough, my firstborn quickly proved herself the kind of child who contentedly chewed on the works of Dr. Seuss before she could read them, a girl who, when the final "Harry Potter" book came out when she was seven, sat down to read it and didn't put it down until she'd made herself physically ill from exhaustion and hunger. In other words, a chip off the old block. Then her sister was born. And her sister didn't care. My younger child has always been able to read and write just fine. She does well in school. She'd just rather, given her preferences, draw or dance or run around than sit with a book.

I didn't grow up in a privileged environment or a highly educated family. But I always had access to books, and I came by my fanaticism for them naturally. My mother's go-to anecdote about me as a child is that I hated dolls but would lovingly push my books around in my toy stroller. I was socially awkward and bad at math and sports. Reading was my thing. When I was younger, my thing made me an outsider. As I grew older, though, my world became almost exclusively comprised of like-minded peers. Today, my family and social circle is full of writers and teachers. And what one has, in such an environment, is a group of people with downright braggy relationships to reading. I have been scolded at parties for not keeping up with the Times bestseller list. It's taken my younger daughter to remind me that not everybody is a naturally enthusiastic reader. That not everybody has to be.

My children are not prodigies. They don't compose symphonies and they're not starting up their own clothing lines. They're developmentally normal kids. But modern parenting can be a highly competitive sport. I thought that I had been trying, their whole lives, to be above all that, to not be Etheline Tenenbaum. Yet lately I've realized the unquestioning satisfaction I always got from assenting that yes, my firstborn too was the type who'd wander into traffic with her nose in a book, who viewed an interruption to her reading with all the pleasure of group of sharks disrupted mid feeding frenzy. Of course I am the mother of a high achiever reader! Just like all my friends! Validation!

In contrast, I grow conspicuously silent now when other parents boast of their younger children's reading accomplishments, of their crazed love for Icelandic sagas and French poetry. At ten, my younger daughter has read none of the Harry Potter books. Zero. She has no interest in Narnia or His Dark Materials or the Little House books or the Ramona ones. She's read the Wimpy Kid and Junie B. Jones books and enjoyed them, but not more than she's ever enjoyed anything else in the world. She still likes the experience of sitting and reading out loud together, but for the warm intimacy of it, not the books themselves. Yet it wasn't until she firmly rejected "From the Mixed-Up Files of Mrs. Basil E. Frankweiler" that I had to finally accept that she's probably not really my child and I was given the wrong baby at the hospital.

It feels good to admit it, to just come out. I did everything I could, world, and my child is still all "meh" about books. And I'm not alone. Maura, the mother of an admittedly bright 5 year-old, says her daughter "loves the library but not the books part. My partner and I are bibliophiles, and expected it to be inborn." But there doesn't have to be a genetic imperative for such indifference to be baffling. My friend Celeste says of her stepdaughter, "I tried very hard for a while to find books that would spark her passion. After two years, I gave up because she was 17 by then and nothing worked." Janet, who has three kids, says her middle one, at 17, is a good student but hates to read. "We laughingly say he has no inner life," she jokes. And my friend Scott, who as a child "ate books like candy" and calls reading "my religion, my occupation, my calling," now has two sons who are apathetic about to it. His 9 year-old recently told him, "Face it, Dad, your family doesn’t like to read." Scott says, "I even tell them they can stay up a half hour later if they read. They'd rather go to bed." I feel his pain. When I go with my children to the library, the younger one prefers to take out movies. Take them to a bookstore; she's the one looking at toys.

As Scott puts it, it's not just that reading is intrinsic to our own identities as parents. It's that, as he says, "It's also, in my estimation, the undergirding for true intelligence, for being worldly and open and curious." That someone could be perfectly fine with not wanting to spend as much time as allowable devouring books is hard for me to understand. But in truth, it's that my own child could be so very different from me – from the part of me I take such pride in -- that I find harder.

Both of my daughters are funny, generous, nice people. They are generally happy girls -- who find their happiness in different things. As Celeste says, "I eventually decided that's who my step-daughter is and it's not necessarily a tragedy. I had to step down my elitist intellectual pedestal and acknowledge that she can be a perfectly smart, capable, contributing person without reading books. There. I said it." Our children are not little versions of us. Their accomplishments are not our accomplishments. And the ways in which they differ from us are not their failures. Or ours, either. These things are not always easy to figure out. I had to learn that lesson from my kids. I had to learn that from living it. Because I could never have found it in any book.