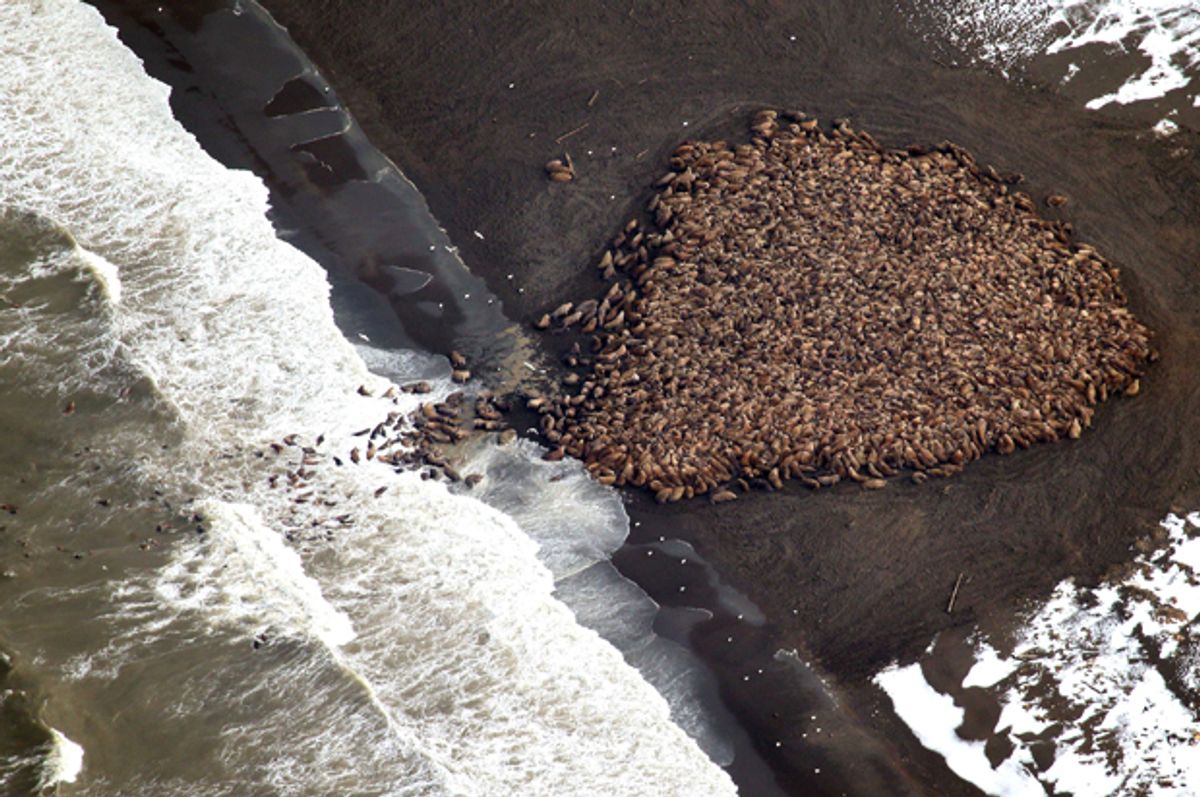 Every once in a while, a chart or statistic or image comes along that reminds us, all over again, why it is that this global warming thing is so terrifying. This week, it was those darn walruses, who -- after a summer when Arctic sea ice was at its sixth-lowest level on record -- mobbed an Alaska beach in the largest such haul-out ever observed there.

Salon was on the story. So, too, was pretty much everyone else who writes about climate issues, and we were all trying to get across the same basic idea: Those 35,000 walruses with nowhere else to go are climate change. Or at least, one of the best ways we have of understanding it. It's not surprising the photos went viral -- they're a powerful, charismatic representation of dramatic changes that are happening in real-time.

They're also reminiscent of the classic polar bear on an ice floe, the original poster child for a warming planet. It makes sense that these climate memes keep arriving our way via the Arctic, because global warming itself is exaggerated there: the region is heating up at double the rate of lower latitudes, and undergoing rapid change that we can observe, not just through temperature data, but through the dramatic decline of sea ice, particularly in the summertime.

The decline in sea ice is "one of the most visible impacts we see as a result of climate change," said Margaret Williams, managing director of the WWF’s Arctic program. You can watch it happen even without the walruses' help:

This is only going to become more visible. According to Andy Mahoney, an expert in sea ice geophysics at the University of Alaska, Fairbanks, we're potentially just 30 to 40 years away from an effectively ice-free Arctic summer. In other words, this is something that could happen in many of our lifetimes.

"These changes are in line with global changes that are taking place, with rises in temperature that are occurring all over the globe," said Mahoney. "What we're seeing in the Arctic is an amplification of those changes."

And the impacts, said Jennifer Francis, a research scientist at Rutgers University, "are pretty much everywhere you can think of looking." Most don't lend themselves to as simple a narrative as, "35,000 walruses gather on Alaska beach because they can't find sea ice." They're also not as obviously tragic, particularly if you're in a business that could benefit from Arctic shipping, or if you're looking to tap new oil and gas reserves.

Or take phytoplankton: You're less likely to notice them than walruses, but they form the basis of the entire Arctic marine food chain. For now, the increased exposure to sunlight that comes with the loss of sea ice has made them 20 percent more productive than they used to be. But there are other factors at play. As sea ice begins to break up earlier in the season, for example, some blooms are beginning to form earlier as well. And that could throw off the feeding cycle for a whole host of Arctic marine species, whose life cycles, NOAA explains, "have been fine-tuned over thousands of years to coincide with and take advantage of phytoplankton blooms."

Subtle changes to a system that finely tuned are necessarily going to have consequences -- which, despite the uncertainty over exactly what they'll be, or even whether they'll be net positive or negative, is a given. “Sea ice plays a huge role in Arctic climate system in many ways," said Francis. “When we lose as much sea ice as we have in almost a decade or so, it’d kind of inconceivable that it wouldn’t have a huge impact."

Crucially, those effects extend well beyond the Arctic: These are changes, Mahoney said, "that are going to have global ramifications." Sea ice, by reflecting the sun's rays back into space, works to regulate global temperatures. And in a terrifying positive feedback loop, its decline actually works to escalate warming.

Francis' research looks at what those inevitable impacts will mean for large-scale atmospheric circulation. As you probably remember hearing during last winter's polar vortex, scientists believe it's possible that what's going on in the Arctic is affecting weather systems, too. There's still a lot we don't understand, Francis told Salon, "but it seems the more ways we try to look at this, the more evidence is piling up that in fact we are seeing changes in the jet stream" that models predict.

"I continue to be surprised at the rate of the change" Mahoney said. "And the more I learn about the Arctic system, I do recognize that these changes are going to have a far bigger effect than I think a lot of people recognize."

"In many ways," commented Williams, "we are tied to the fate of the Arctic sea ice without even realizing it."

When Williams said that the walruses are telling us something, in other words, she wasn't kidding. Between the direct effects that Arctic sea ice decline is having, and what images like those of the walruses represent about the state of the warming planet (bad news all around) -- they kind of tell us everything we need to know.

The question now is whether we're going to listen to them. After all, we've been talking about those polar bears for a long time, and their home is still in trouble. The world experienced nine extreme weather events last year alone that, as far as we can tell, were made more likely and more intense by climate change; yet there are still doubts that our leaders will be able to exhibit the boldness and ambition needed to agree to an effective plan for action. The U.S. has one coast that's drowning, one battered by superstorms, and another mired in a record-breaking drought that's getting worse. And our emissions last year managed to increase.

"We are witnessing a slow-motion catastrophe in the Arctic" said Lou Leonard, WWF's vice president for climate change. To which we could add: We're witnessing a slow-motion catastrophe everywhere. Science is imperfect and still trying to keep pace with the unprecedented changes affecting our world, and the story we end up with isn't always as straightforward as the walruses'. But if we look at all of it together -- the heat waves, the droughts, the drowning islands and the stranded animals -- it's pretty hard to miss.