Atheism's white male problem: A movement needs a moral cause beyond glamorizing disbelief 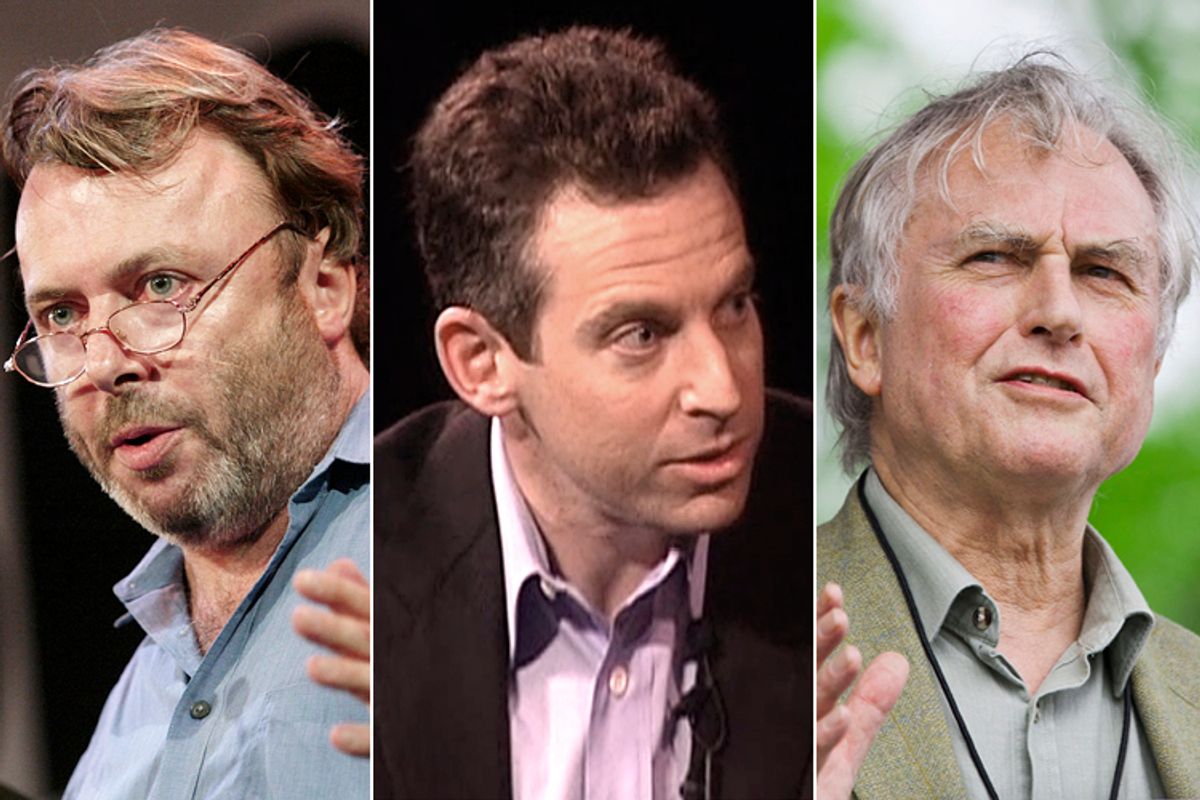 For those atheists whose non-belief comes as naturally as breathing, movement atheism is indeed an odd thing. Nevertheless, it is a thing. The atheist movement comprises more than 2,000 groups and organizations in the U.S. today, but the movement, in composition and purpose, has failed to establish a coherent cause outside of validating non-belief, extolling the advancement of science and offering platitudes toward protecting the separation of church and state.

More significantly, movement atheism has failed to articulate an identifiable moral cause, and any progressive movement that chooses to dismiss the great moral challenges of its time will be rightfully dismissed itself. In other words, movement atheism, as it stands today, risks facing its end times, or, worse, becoming a passing fad.

While I don’t necessarily agree with Hedges’ sentiment, and it must be said that religion is no more moral than the absence of it, his reply speaks to the failure of movement atheism to broaden its appeal beyond predominantly upwardly middle-class white males. “If mainstream freethought and humanism continue to reflect the narrow cultural interests of white elites who have disposable income to go to conferences then the secular movement is destined to remain marginal and insular,” writes Sikivu Hutchinson.

“A growing share of the American public wants religion to play a role in U.S. politics. The share of Americans who say churches and other houses of worship should express their views on social and political issues is up 6 points since the 2010 midterm elections (from 43 percent to 49 percent). The share who say there has been “too little” expression of religious faith and prayer from political leaders is up modestly over the same period (from 37 percent to 41 percent). And a growing minority of Americans (32 percent) think churches should endorse candidates for political office.”

With atheists ranked among the fastest growing minorities, and with “spiritual but not religious” being the fastest growing religious demographic in the U.S., the Pew findings appear somewhat counterintuitive. The answer to this disconnect may lie in the atheist movement’s failure to provide a moral narrative for the economic and social realities that ail your everyday American.

By design of our corporate ruling elite, the economy is not getting any better for the working and middle class. Everyday Americans face crippling debt, bank foreclosures, medical bankruptcies, eroded savings, and stagnant or poverty level wages, and our levels of food insecurity resemble countries like Indonesia and Tanzania, rather than OECD nations like Canada and Australia. The retirement age continues to climb, and there’s no guarantee Social Security will be there for those who reach it. The existential questions that a warming planet asks remain unanswered, courtesy of a political class awash with corporate cash. Across this bleak backdrop America slides into a expanding war in the Middle East, and another potential Cold War in Europe.

These are the sins of unfettered capitalism, and for those who find themselves left broken in its wake, religion becomes the balm. Tragically, movement atheism has failed to offer a soothing alternative.

The surest way to defeat religious extremism is to defeat free-market extremism, which is something movement atheism seems to overlook in its march to evangelize secular reason and freethought. “By failing to pursue the critique of religion into the sanctum of global capitalism itself, by reducing discussion of morality to a vapid form of well-being and personal security, and by failing to advocate alternate forms of virtuous community -- all in the name of "reason" – they [movement atheists] end up providing the pathologies of capitalism with a veneer of "commonsense" rationality,” writes Scott Stevens, the Religion and Ethics editor for Australia’s public television network.

While the movement rightfully lauds the accomplishments of science advancement and evidence-based reasoning, the deification of science itself is not enough. “Technology and science, though they are cumulative and have improved, in many ways, the lives of people within the industrialized nations, have also unleashed the most horrific forms of violence and death, and let’s not forget, environmental degradation, in human history. So, there’s nothing intrinsically moral about science. Science is morally neutral. It serves the good and the bad,” says Hedges.

The atheist movement caught fire in the first decade of the new century. Many were drawn to it due to legitimate anger toward the overzealousness of the Christian right, the crimes of the Catholic Church and the intolerance of religious Americans toward non-believers. While the movement has produced a number of great thought leaders, has harnessed a sense of community for victims of religious discrimination and has been a willing defender of the wall that separates church and state, it must move beyond being little more than a moral statement that says, “We are atheists for atheists.”