From Sugar's "Gee Angel" to Suede's "We Are the Pigs," proof that '94 gave us some of our greatest songs ever 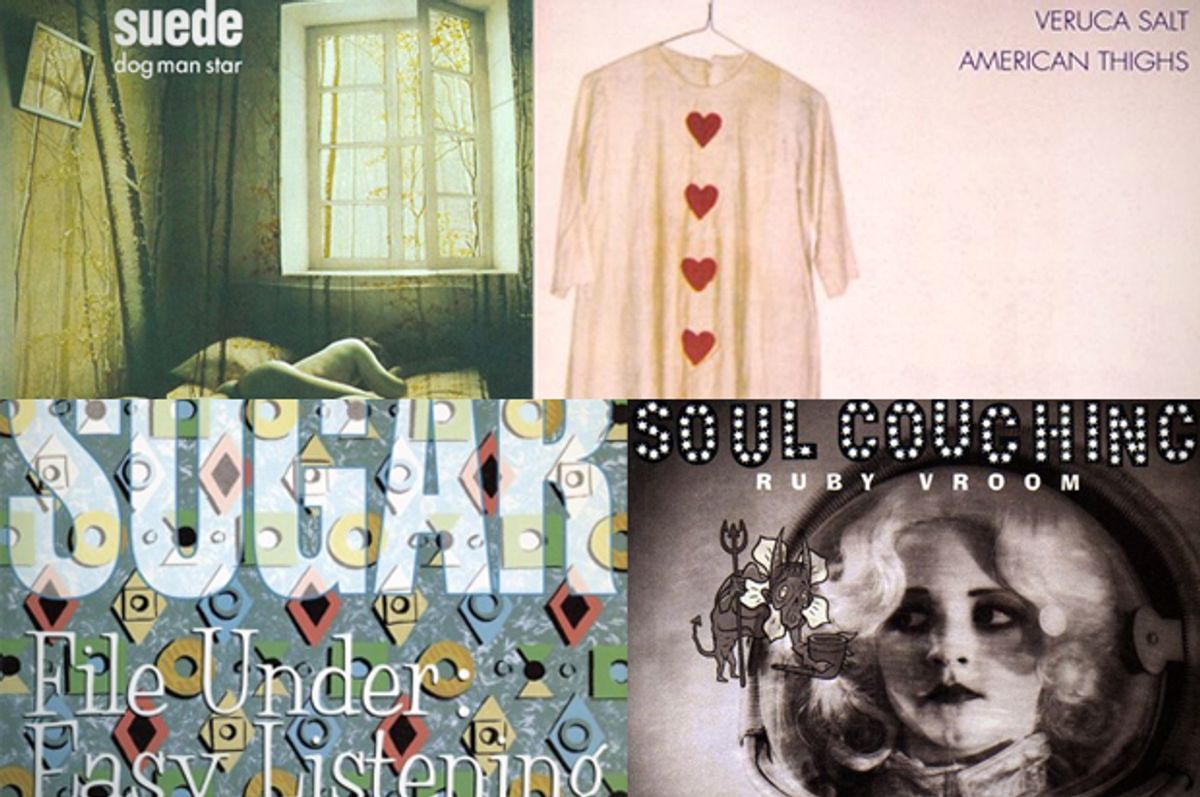 1994 was a very good year for music, especially in the annals of Alternative Nation. Grunge hadn't yet grown tired, while bands such as R.E.M., Pavement, Hole, Beck, Tori Amos and Green Day released landmark records. In fact, there was so much good music released in 1994, some of it slipped through the cracks in the ensuing years. Here are a few such tunes that deserve to be rediscovered:

On this cut from the "Hips and Makers" LP, the Throwing Muses frontwoman strips her music down to stark acoustic guitar and shivering cello. Bonus: Michael Stipe contributes see-sawing background countermelodies.

The Jason Falkner-penned slice of grungy power-pop lurches through the verses, before blooming into a lovely, Beatles-like chorus full of doe-eyed harmonies.

File next to Helmet and Jesus Lizard: The Irish band Therapy? paired its ennui ("I've got nothing to do / But hang around and get screwed up on you") with corrosive music borrowing liberally from punk, metal and hard rock.

The duo left the campfire jams behind with this nostalgic song, an amplified, electric folk tune adorned with mandolin, bongos and accordion that takes a bittersweet look at difficult life lessons.

Sugar's second album, "File Under: Easy Listening," doesn't receive as much critical love as debut "Copper Blue," which is a shame. Ferocious songs such as this one cloak their yearning melodies in jagged punk-pop riffs, the aural equivalent of a ringing in the ears.

Grant Lee Buffalo always had deep reverence for (and was in awe of) the historical characters and events of which they sang. On the lead-off track from the underrated "Mighty Joe Moon," the band's electrified Americana has never sounded more desolate – or the trio more in thrall with the ghosts of the past.

Veruca Salt, "All Hail Me"

The heavier parts of Veruca Salt's catalog—case in point: "All Hail Me"—don't receive the attention they perhaps deserve. This single marries coquettish vocal harmonies with a devious-sounding, sludgy metallic underbelly.

In the '90s, nobody else sounded like Soul Coughing—and nobody could compare with the group's playful, theatrical jazz/hip-hop/rock hybrids. "Bus to Beelzebub" absolutely sounds like a road trip to hell, complete with alarmed ostinatos and Mike Doughty's evil-conductor slam poetry.

The Smiths- and Blondie-worshipping Britpop act produced one of the era's indelible anthems, on the strength of vocalist Sonya Madan's majestic vibrato and a burbling bass line.

Speaking of Britpop shoulda-beens: Erudite act the Auteurs married the artsy angst of Suede with Psychedelic Furs' post-punk darkness on this superstar single from the year.

Bratty, taunting and full of distortion, this tune summed up why the grungepunk Los Angeles group was beloved by so many.

Later used to great effect in the iconic Britpop movie "Trainspotting," this motorik techno dirge hums along on a track of ominous skittering rhythms and zombie-like background harmonies.

The defiantly uncommercial Irish post-rock group codified their malcontent into a rambunctious alienation anthem that subverted the mainstream even as it embraced massive hooks.

Suede, "We Are the Pigs"

How did Suede (aka London Suede) follow up their crunchy, glammy debut LP? By pulling a Bowie and reinventing themselves as shadowy, debauched post-glam New Romantics.

The return of grungy space rockers Failure is a victory lap of sorts—a way for the band to finally get the attention and acclaim it deserved for influential songs such as the metallic fuzzbomb "Moth."