My doomed mission to make her happy

A year into our marriage, her romantic interest in me waned. But I wanted to believe we could still make it work 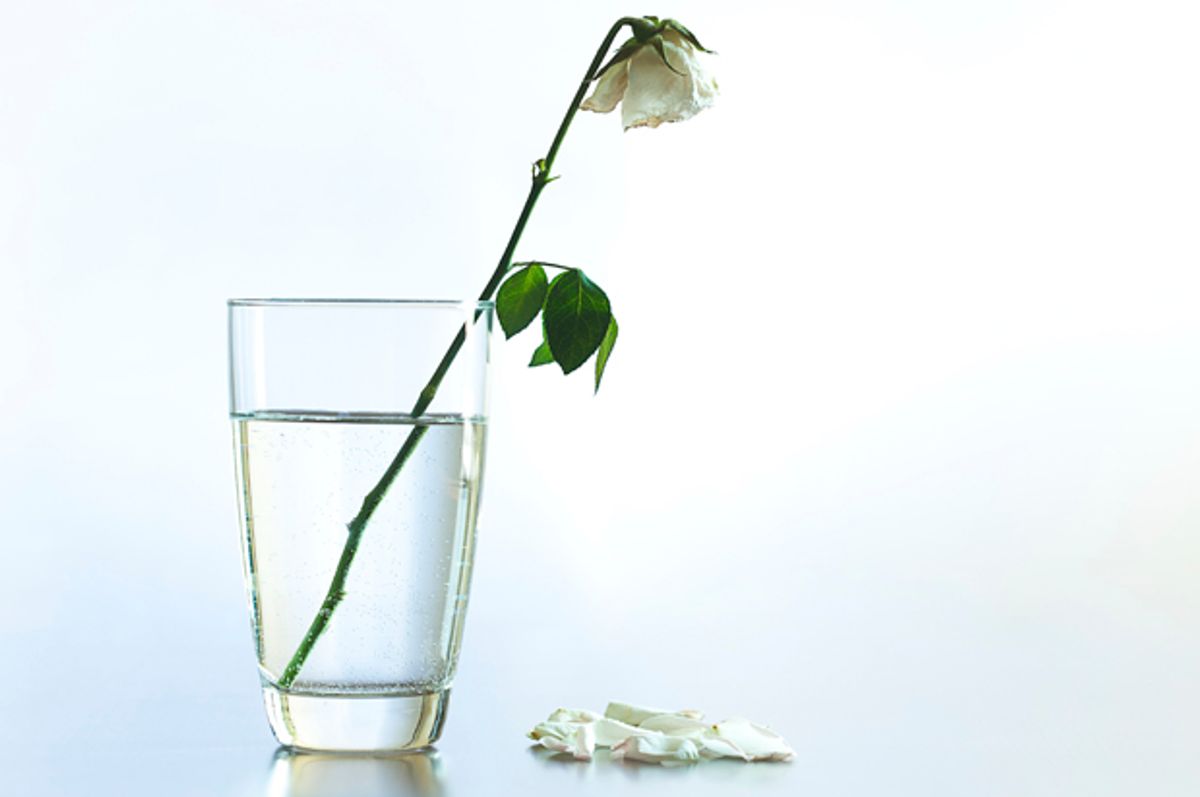 Eight years ago, I took a young woman to dinner. It was not really a date (she was too young, we seemed too different), but a friendly treat to a restaurant she wanted to try.

As she sipped her pomegranate cocktail and looked around the dining room, she said, “I’m so happy I could cry.” Her words pierced my heart.

We are all familiar with the kitschy Valentine’s Day Cupid, a rosy-cheeked, winged cherub with his arrows and quiver. But it was she, not Cupid, who shot the arrow. The arrow said, “You have just made me happy.” It implied, “You have the power to make me happy. I am open to you in that way.” If each of us is a fortified castle, she had just raised her portcullis. I rode forth on my horse, without armor.

In hindsight, I realize that I was waiting for just such an invitation. Five years earlier, my heart had been broken. Like most traumas, heartbreaks affect different people in different ways. Mine left me not embittered or cynical, but with a larger and softer heart, a heart spilling over with love.

Still just a friend, she stayed in my guest cottage for a week, and one day when I made her a cup of white tea, she looked at me thoughtfully and said, “You really take care of me.”

Maybe the white tea was an arrow that pierced her heart, for a few days later she made the first move, and soon we were in love. Even before I proposed, I promised that I would love and stand by her always. The promise was as much for me as for her. My love had found a place to go.

When her birthday rolled around, I took her skydiving, a lifelong dream of hers. That evening I proposed. She said yes. I went to sleep thinking that twice that day I had jumped into the unknown.

Decades earlier, as a graduate student studying philosophy, I had become infatuated with the existentialist notion that we are radically free. Every moment was a choice; not to realize that was to live in bad faith. To realize this was to live authentically, and living authentically was my mission then. I thought marriage would violate freedom—how could I make such a commitment and still preserve my option to choose differently tomorrow or next year?  This, I believed, was why Sartre and de Beauvoir had chosen not to marry. My graduate school girlfriend and I, with the exuberance of young devotees, imagined ourselves disciples of Sartre and de Beauvoir, and we wanted to live in freedom as they had. We made our hearts obey our reason. Such was my cast of mind that whenever I heard someone was leaving a relationship, I felt it a victory for the cause; it meant someone had chosen freedom.

In the months after the arrow shot over the pomegranate cocktail lodged in my heart, I came to a realization that had been decades in forming: The greatest thing a person can create with his freedom is an abiding commitment. Commitment is not the opposite of freedom; it is freedom’s finest hour. I saw that a free person could make a promise. I understood what was sacred about a vow.

We had a small, intimate wedding, and I would later learn that my friends there were of two minds about the marriage: a shake of the head (he is so much older) followed by a slow, reflective nod (these two just might make this crazy thing work).

The crazy thing did work—for a while. My mission to make her happy was deep and active. I thought of birthday presents months in advance—hang gliding, piloting a small plane, clothes she had coveted. I ordered her favorite wine by the case, got tickets to her favorite symphony. With all my heart, I listened to everything she said. Together we cooked, we traveled, we played scrabble after dinner. We created our private family culture with its private jokes, made-up words, and rituals. We chose names for the child we would have. We raised a puppy. She stood by me through my cancer surgery; I supported her in her battle with depression. We were elated by each other’s successes; we felt each other’s frustrations as if they were our own. We loved one another. We were a family.

A year into the marriage her romantic interest in me waned. One night when I told her over a candlelight dinner how beautiful she looked, she responded with irritation, “So am I supposed to say something romantic now, too?” More “ouch” moments followed, but I absorbed them as polluted streams are absorbed by a sea of love.

Eventually antidepressants smoothed out some of her rougher edges. But she had lost the bloom of romance for me, and no drug could restore that.

Though she had spoken the most clichéd of break-up lines (“I love you but am not in love with you”), she said her lack of romantic feelings was not a deal-breaker for her, so I kept faith. I doubled my devotion to her happiness.

In marriage—even with inventions like living together first or prenuptial counseling—baptism precedes catechism. We jump, and then we choreograph the freefall. I used to do wedding photography, and at many of the weddings I shot, someone—maybe the officiant, maybe in a toast by the mother of the groom or the father of the bride—would tell the couple something like this: “You are in love, awash in romance. Bask in it now, but remember this: The honeymoon will end. The car will break down, the roof will leak, and the diapers will need changing. Your marriage will survive not through heat but warmth: patience, kindness, generosity, and care, all those clichés from 1 Corinthians 13: love is patient, love is kind.” I remembered that advice. Love as care became my marriage catechism.

Our roof leaked, all right. I discovered how difficult and multi-dimensional her depression was. I discovered how different we were: I favored honesty and openness; she coped through avoidance and denial. She was a cyber addict; I liked hiking among the trees. I was slow to anger; she had a short fuse. I suppose every marriage has moments when one imagines throwing in the towel. When I had those moments, I reminded myself of my vow and my mission to make her happy. My freedom lay in my fierce commitment.

As the bond I felt became stronger, the bond she felt weakened. Amid the stress of unemployment, the thrill of a flirtation with another man, and the frustrations of a married life that did not cure her unhappiness, she decided to leave. She told me two days after a pregnancy test came back negative. She said it was a sign. She said that she did not want to wake up in ten years and realize she had missed her chance at a life of passionate love. It was as if everything I lived for and wished for had been wiped away by the cruel swipe of a sponge.

Of all the truisms on marriage I’ve heard since my divorce, this one haunts me: “If you want a happy marriage, marry a happy person.” My mission to make her happy probably had been doomed from the start. For my efforts I reaped a long, searing grief, that hole in the heart that so many feel. As months turned into years, I did what I could to survive. I tried not to feel like a chump.

I am a literature teacher, and when my students wonder why Odysseus left an idyllic, immortal life with the beautiful Kalypso for the dangers of a sea voyage home, I think of the old warrior’s understanding that the enticements of eros pale before the greater value of oikos—family and home. In a famous poem written two and a half millennia after Homer, Tennyson imagined that Odysseus grew restless after he returned home, that he longed for another voyage. I disagree. I remember the night I returned home in a hailstorm, and when I drove through my darkened neighborhood (the power was out), I saw that my wife had filled our house with candles, their soft glow spilling from the windows. I remember the hug she gave me at the door. I can close my eyes and feel it to this day. So I do not imagine the old warrior restless; I believe the salt tears of joy that flowed upon his homecoming meant he would be happy there forever.

When now I hear of a person leaving a spouse, it is no longer victory I feel, but an empathic grief. I believe that freedom is like a form in search of content, and there is no content more valuable than commitment, nothing more precious than a vow.

Marriage is not a contract between two people but a creation of something greater than the sum of those two parts. When I read of the wife who remains true to her husband who returns paralyzed from war, the husband who faithfully sits at his wife’s bedside, when I see couples pushing a stroller or hauling groceries or holding hands, whether they are 30 or 50 or 75, whether they look happy or frazzled, I offer them my silent salute. They are my heroes now.

Bill Smoot teaches at the Castilleja School in Palo Alto, California, and in the Prison University Project at San Quentin Prison. He is the author of "Conversations With Great Teachers."