Comedian tells Salon about his clash with Affleck, his "Flip a District" effort -- and a recent date with Rand Paul 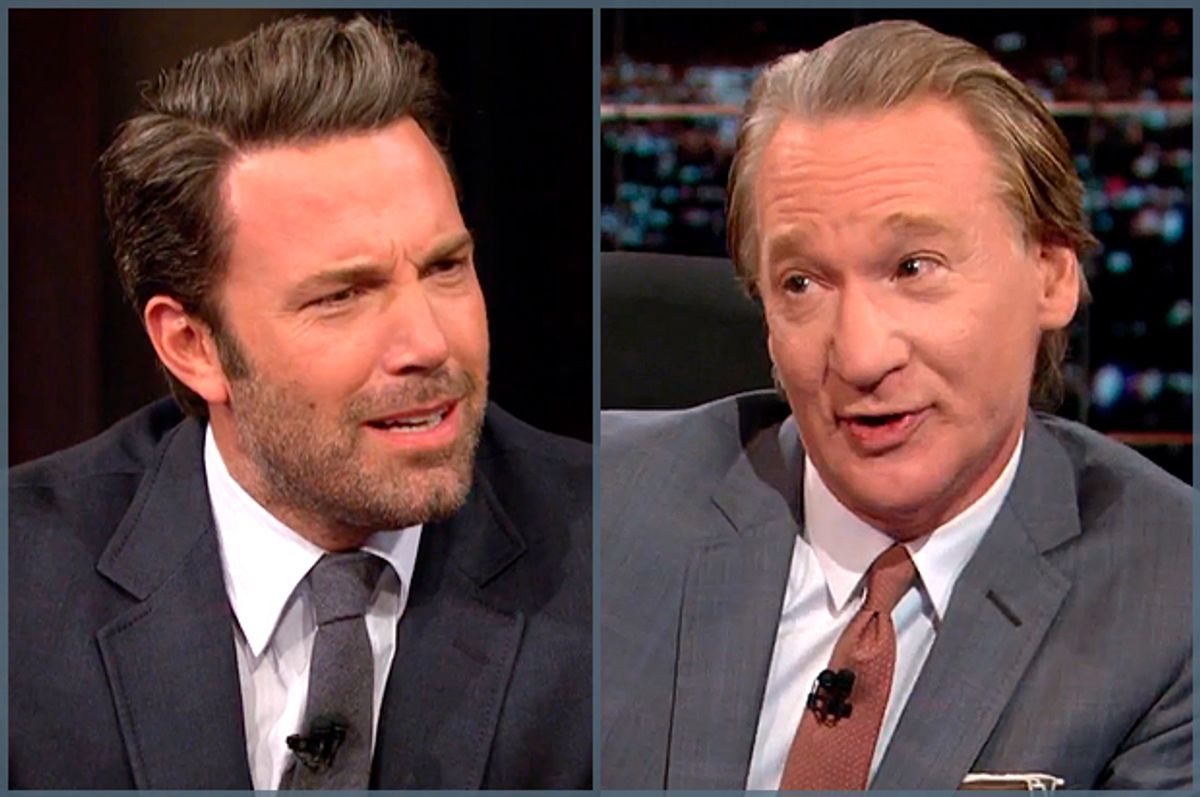 If you're just catching up on the weekend's politics news, there's one video that you need to see: the contentious and intense moment during Friday night's "Real Time with Bill Maher" during which the host got into something of a yelling match with guest Ben Affleck over the essential nature of Islam. Maher's criticism of Islam is nothing new, of course. But seeing A-lister and well-known liberal Ben Affleck directly accuse him of being "gross and racist" showed this disagreement between Maher and other prominent liberals was taking on new levels of acrimony.

Meanwhile, Maher is also running what he calls his "Flip a District" campaign, which now heads to Minnesota, where the comedian will be hosting a non-televised and sold-out panel discussion on Tuesday night as part of his effort to unseat Rep. John Kline. Salon spoke with Maher on Saturday about this effort as well as the other recent headlines he's made. Our conversation is below, and has been lightly edited for clarity and length.

First off, I wanted to ask you about how you feel the "Flip a District" campaign has been going overall, as well as what you hope to accomplish with the panel event in Minnesota on Tuesday?

Oh, just more of what we've been doing, which is trying to get attention to this race — and I feel like it's picking up steam [like] crazy. It's amazing, the stuff we hear from the district and how many people are excited about us coming and doing this. I saw an article in [a local] paper the other day that said they think [the district] is flippable.

You know, we have a month, and I said on the show last night that the most surprising element of the whole things to us — and, very sincerely, I'm saying this came as a shock — is that this guy, Kline, isn't even making any appearances!

We thought all this month we'd be trailing him, getting some footage, seeing what he had to say, using those words against him — there are no words! His whole campaign strategy is to hide and to not even remind people there's an election. He doesn't want people to know there's an election. That should be seen as something horribly insulting to voters.

So I hope that the local media will pick up the ball from there and try to find him. [Laughs] Is he in the witness protection program?

To your point, I actually spoke earlier this year with Wesley Reed, who is running against Rep. Blake Farenthold, who is also on your target list —

Oh, Blake! Yes, we love Blake. We couldn't do Blake, he was unflippable, but we loved him.

I tried to talk to him, too, and like you were saying, there are a lot of candidates who seemingly are just trying to run out the clock and lie low until the election's over.

Yeah, they said yes and then I guess they figured out what Salon was because they never got back to me.

It's such a cynical strategy to depend on the apathy of the voters and how uninformed they are.

Our reporter, Alexandra Pelosi, was in [Rep. Kline's] district a couple of weeks ago, and she said the most amazing thing she found was that so many people: a) Don't know there's an election coming; and b) Don't know who their representative is.

The only names they really knew were [Rep. Michele] Bachmann and Al Franken — and sometimes they were for both of them just because they had name recognition, which is pretty insane because obviously they're diametrically opposed, politically.

Do you think of "Flip a District" as something you want to do again in 2016?

I don't know. I mean, I'm just concentrated on this one. Let's see what happens here. Maybe this guy will win by 30 points [laughs].

Y'know, he's kind of making it a race where he's running against me. That's what he wants to do. To this day, he has not refuted one thing we've said about him. It's all about — and, again, he doesn't talk at all, but he speaks through his fundraising emails — it's all about running against, y'know, "the Hollywood elite," blah, blah, blah.

But I'm not on the ballot and it's not supposed to be [about] me, and he doesn't defend his record because it's not a very easy record to defend.

I know this campaign is more about a negative endorsement than it is about cheerleading for Mike Obermueller, the Democratic candidate. But have you experienced any people from any of the Democratic campaigns reaching out and asking you to step back because they're worried their opponent is fundraising off of making you the villain?

No, no. We have no communication with the Democratic campaign — I didn't even know who [the Democratic candidate] was until I read it in one of Kline's fundraisers. This is strictly a negative campaign [laughs]. It's strictly a campaign to oust someone, and my position has always been that I don't care who the opposition is; he literally couldn't be worse.

So, look, you mentioned last night's show. I'm not going to ask you to debate Islam with me; I'm sure you have more than enough people trying to do that with you right now —

Yeah, let's leave that for a while. I've said enough about that.

But I want to ask you how you felt the Ben Affleck/Sam Harris segment went. Did you feel frustrated as it was happening?

I think Sam and I and Ayaan Hirsi Ali and Salman Rushdie and everyone who is basically making the same point, I think we all feel frustrated because I think we feel like the people who are arguing with us are not listening.

We're liberals! We're liberals. We're not crazy tea-baggers, y'know, and so it's kind of hard to be making this case — based on facts, based on polling, I think based on what everybody really knows... I mean, do the people arguing with us, would they really open a lesbian art gallery in Ramallah? [Laughs] Or Karachi? Or Cairo? I don't know if they would back up what they're saying with actions.

We are not bigoted people. On the contrary, we're trying to stand up for the principles of liberalism! And so, y'know, I think we're just saying we need to identify illiberalism wherever we find it in the world, and not forgive it because it comes from [a group] people perceive as a minority.

Did you expect Affleck to get as upset as he did —

Well, I don't want to debate the character of Islam with you, but I am interested in how the pushback you're getting from liberals makes you feel about your place within contemporary liberalism. Do you feel like the intensity of the criticism is forcing you out of the community or do you more take the position that arguments can be painful but they're ultimately healthy?

It is healthy; and also, I don't care about any community. I've always said what I believed and anyone who does not like healthy debate probably isn't watching [my] show to begin with.

And again: If you're a liberal, stand up for liberal principles. I'm the liberal in this debate.

Right, but if you don't care about being part of the liberal community, does it really matter if you're the liberal? Is the label, group, tribe, etc., you associate yourself with important?

No. I mean, I've never joined the Democratic Party. I'm proud to be a liberal, I think liberal principles have always been what I've stood up for, but I don't really need the affirmation of an entire community and I certainly don't need to agree with the majority of liberals on everything. Mostly, I think we're in agreement; and sometimes my own audience has booed me because they don't agree with what I'm saying.

But I'll tell you something interesting — and then I am going to get off the subject because we're here to talk about "Flip a District," was my understanding — what I think is interesting is that the audience, my studio audience, has really come around on this issue. When I used to talk about it, it was just either stony silence or outright booing and now I notice quite a shift.

Do you think that's because of ISIS?

So I think it's just how you frame it. And there's a knee-jerk reaction sometimes among liberals — "Oh, we need to be protective of a group that certainly does face prejudice and bigotry in America" (and I'm certainly against that) — but we need to understand that it's a wider issue.

To stay on what's going on in American politics right now, I wanted to ask you about your feelings about Sen. Rand Paul. I know there's been some exaggeration in terms of the degree to which you're fond of him —

I never used those words. I said I was considering him and he was the first Republican I would even consider in a very long time.

And that's because of his views on foreign policy?

Absolutely, yes. He's great on ending the empire, not getting into any more foreign entanglements — I'm even to the left of him on the bombing [of ISIS]; he wants to keep bombing ISIS, I want us to stop bombing altogether.

Well, he said that. He said he's OK with air attacks. Because he's not like his father, he's much more...political, y'know. His father never gave an inch and [Rand Paul] really wants to be president.

I had drinks with him about two weeks ago. He's a nice guy, he's a smart guy. My big problem is I asked him about the environment, which is my big issue — because he had made a comment that was very similar to what Dick Cheney said about a month or two ago, which was basically, "Why are we talking the environment when ISIS is out there?"

I said, "Senator, y'know, you sounded just like Dick Cheney..."

How'd he take that?

Well, his answer on the environment was wholly unsatisfactory to me. Unless he comes around, big time, on that issue... I mean, I won't even quote what he said to me, I'll give him the chance to gather a better answer [laughs], but that would be a deal-breaker, right there, because Hillary Clinton said something awesome about [environmental issues] and I assume she's going to be the other candidate. So, right on that issue, he would lose my vote.

I'm imagining a pained look on his face in response to you saying he's like Dick Cheney. He doesn't talk like this as much as he used to, but I think it's pretty well understood that he's not Cheney's biggest fan.

Right. They're diametrically opposed on a lot of that foreign policy stuff. But it's very unfortunate that even he, who I consider, in the Republican Party, the most viable [presidential candidate], is apparently so far in the bubble on their environmental denial that he just doesn't have an answer that sounds like it should come out of the mouth of any politician in the 21st century.

And coming from Kentucky — can you think of a worse circumstance for a politician in terms of being right on environmental issues?

Right, because we have to save those awesome jobs in coal-mining...

Which are dwindling, no matter what.

Yes, we have to save the worst job ever that is giving people black lung again.

Yeah, and he's also said some stuff on mountaintop removal, which is just a horrible practice, that would probably make you retch.

[Laughs] It indeed would and, like I say, this is the deal-breaker issue with me. You've got to be good on this or, I'm sorry, not going to happen. But we'll see.