"I'm flattered, but also worried about what this says about our culture": Meet the man behind "Drunk Hulk" 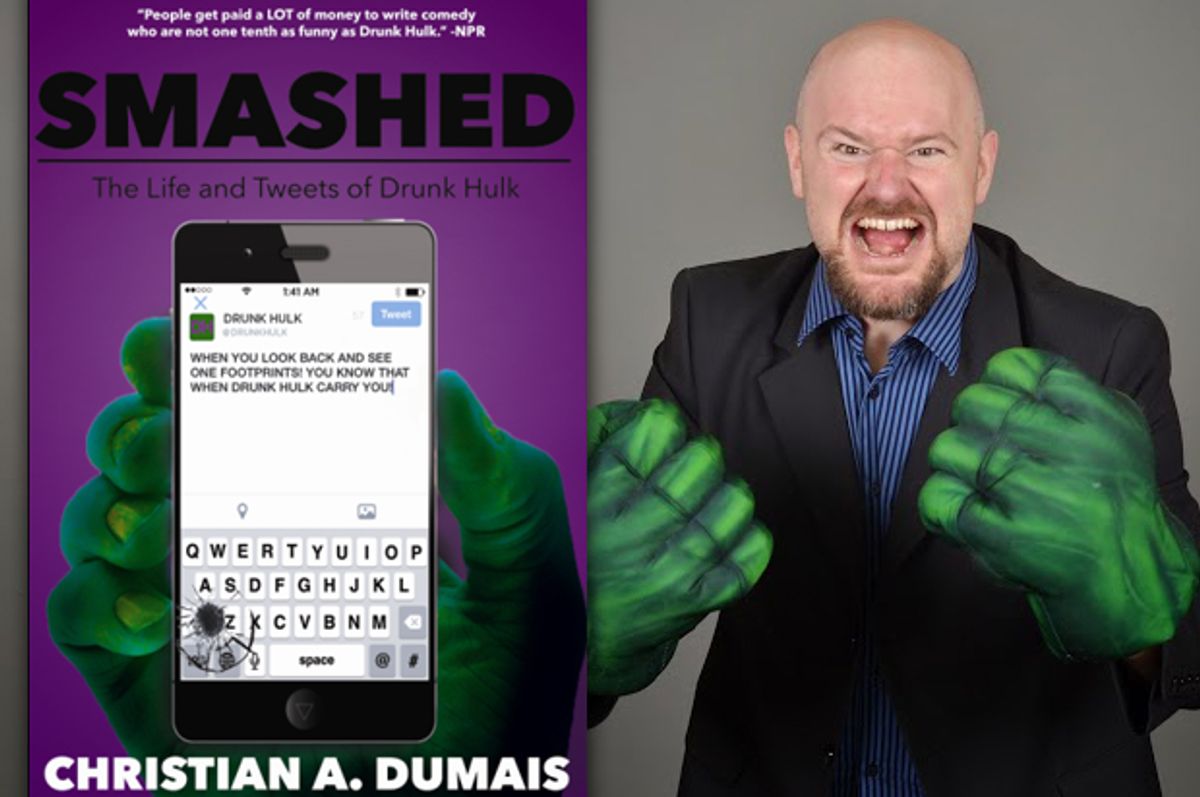 Usually, when a person's social media presence involves the exclusive use of capital letters, a shaky grip on verb tenses, and politically incorrect (to put it mildly) commentary about Ebola, he's either universally shunned or lauded as a #tcot. But supply him with green skin and a few clever turns of phrase, and he's an icon.

The man behind Drunk Hulk, Christian Dumais, is a considerably more sedate individual than his creation. He's a writer, speaker and occasional standup comic, with a self described "short, Costanza-like" build, who lives in Poland. And in his five years of reckless shouting into the Twitter void (typical observation: "LOT OF BIRD DROP DEAD IN ARKANSAS! THEN LOT OF FISH DIE! DRUNK HULK TERRIFY! SOMEWHERE OUT THERE IS CAT WITH ONE WISH LEFT!") his online alter ego has become a guy Time once called one of the best fictional characters on Twitter. But now, Drunk Hulk is staggering off into the sunset. On October 6, he will end his online run and tweet no more.

To ease the pain, though, Dumais is keeping the @drunkhulk account visible and active, and he's released "Smashed: The Life and Tweets of Drunk Hulk." It's a breezy ride through Dumais' online origin tale (He says the span of time between coming up with the character and creating the account was three minutes) and sudden virtual fame, through his character's most memorable tweets. And it's a stroll through the past five years of world events seen through the eyes of one of the Internet's best-loved and unlikeliest news sources. Salon spoke to Dumais about what being Internet famous is really like and the inspiration for Drunk Hulk.

Why do you think Drunk Hulk was a good fit for Twitter?

I believe Drunk Hulk thrived because of Twitter. This is a drunk version of the Hulk typing in all caps. I can't imagine many readers having the patience to deal with him in large doses. People have an aversion to people "shouting" online, and with Drunk Hulk, it's impossible to read his tweets without hearing his voice inside your head. A tweet hits that sweet spot where the compactness of the humor and the readers' patience meet.

This is why I wanted "Smashed: The Life and Tweets of Drunk Hulk" to be half tweets and half essays. The first five chapters lead up to the tweets and then readers can treat the rest of the book like a "The Far Side" book, where you can pick it up at random and have a quick laugh.

How do you think living as an expat has shaped your online persona? Would Drunk Hulk be different if he were living in Montana instead of Poland?

I don't think Drunk Hulk would exist if I weren't in Poland, which has worked for and against me. If I hadn't taken a chance and moved here in an effort to find myself, I wouldn't have been where I was in that time and place to come up with the random idea of Drunk Hulk.

In the book, you talk about the person who told you your career would be different if you lived in NYC -- but could you envision living the life of what you call a Barely Internet Famous celebrity there? Like, would you have a cooking show now?

I do believe that I'd have more opportunities if I were living in the States as Drunk Hulk. That's the message that's been repeatedly given to me from all the phone calls I've had over the years. Whether this would translate to a different kind of success is another thing. I probably could've capitalized on it more or I could've fumbled completely. Maybe I'd be the assistant to the assistant of someone on a cooking show and have a serious cocaine addiction from all the assistant of the assistant pressure.

Were you surprised at how people connected with this Twitter personality? What's it like having a character who's famous, while working on your own standup and writing?

I'm always continually amazed at how people have responded to Drunk Hulk. It's been really gratifying.

As for being THAT guy, well, this is where I have my geographical disadvantage. While Twitter is slowly becoming more popular in Poland, it's still overlooked. I think a lot of it has to do with Polish being so loquacious that by the time they type the third word they've run out of characters. So being Drunk Hulk in Poland is like being the exact opposite of David Hasselhoff in Germany.

I love when you talk about how strategic you are about timing of your tweets and the length of them. What do you think makes someone a good/successful tweeter? I usually tweet at 6 in the morning NYC time which is why I'm useless.

It's funny because your tweets are usually the ones that let me know that the east coast is waking up. A successful tweeter is someone who is tweeting with others, not at others. Drunk Hulk didn't interact with anyone for almost six months. I just thought I'd have the feed speak for itself and not get involved. When I did start interacting, it opened up a whole new world for me. It's often the most satisfying part of tweeting.

In the book I talk about all the rules I gave myself with Drunk Hulk (like: He never curses). I do believe there is something to be learned from them, but I also know that they aren't universal. I created the strategy because that's how my brains works and I have a tendency of over-analyzing everything.

What's it like to be a trusted news source? I'm pretty sure I'm in the number of people who've learned of breaking events from Drunk Hulk first.

This is the part that's always taken me by surprise, and even if I could have predicted the feed's success, I never would have entertained this possibility. It's something that's always been there from the reactions to the tweets ("I can't believe I learned about this from Drunk Hulk..."), but when it wasn't until I started breaking some major news stories that I realized how powerful the account could be.

Keeping in mind, I'm a natural news junkie. I read everything from Salon, Drudge, Huffington, CNN, BBC and more, so it's not uncommon for me to have a thousand tabs open to all of these sites. I'm not deliberately trying to break any news. With Gaddafi's death, I'm literally between teaching two classes with about four minutes to catch up on the news, and I see a link saying that there were unconfirmed reports of his death. I spend my entire free time jumping from site to site trying to find a confirmation while thinking of a joke to go with the news. I think it was an Israeli news site that posted a confirmation and then I tweeted it. My urgency to tweet the news wasn't based on being first, but because I knew I had a class waiting on me. I signed off the computer and went back to teach. It wasn't until two hours later that I learned I broke the news on Twitter ahead of CNN and the rest.

Now there are times when something happens in the news and people will tweet, "I won't believe it until Drunk Hulk writes about it..." and that takes me by surprise every time. So I'm flattered people trust Drunk Hulk, but I'm also worried about what this says about our culture.

Because this is me putting my money where my mouth is as a writer. I'm a quality over quantity kind of creator. There have been so many things I've read or watched as a fan that I felt should have done this or should have ended here instead of there. And it pains me to watch something I love being run into the ground.

I could easily keep Drunk Hulk going indefinitely, but then I'm falling into the same trap that annoys me with other creators. I really do feel Drunk Hulk is also about encapsulating a specific period of time in our pop culture and to keep it going would undermine this.

I want people to look back on Drunk Hulk as something they loved and/or appreciated without having that second thought of "But he started to suck at the end though." It's possible people will think that anyway - which is beyond my control. But at least I can honestly look at the last five years and feel like I'm ending on a high note, especially with the publication of the book.

The account will still exist both on Twitter and Facebook, but there will be nothing new from Drunk Hulk after the 6th. As for what happens with me, I'll continue on and try new things like I always do. And finish my novel along the way.

What do you imagine Drunk Hulk would be doing in a real bar right now?

I always imagined Drunk Hulk as an overweight guy sitting at the end of the bar without a shirt. He's usually completely out of it, but every once in a while he'll glance up at the television and comment on what's going on, revealing a weird nugget of wisdom in the process that takes everyone by surprise.