John Oliver is smarter than the State Department: Irony will not defeat ISIS 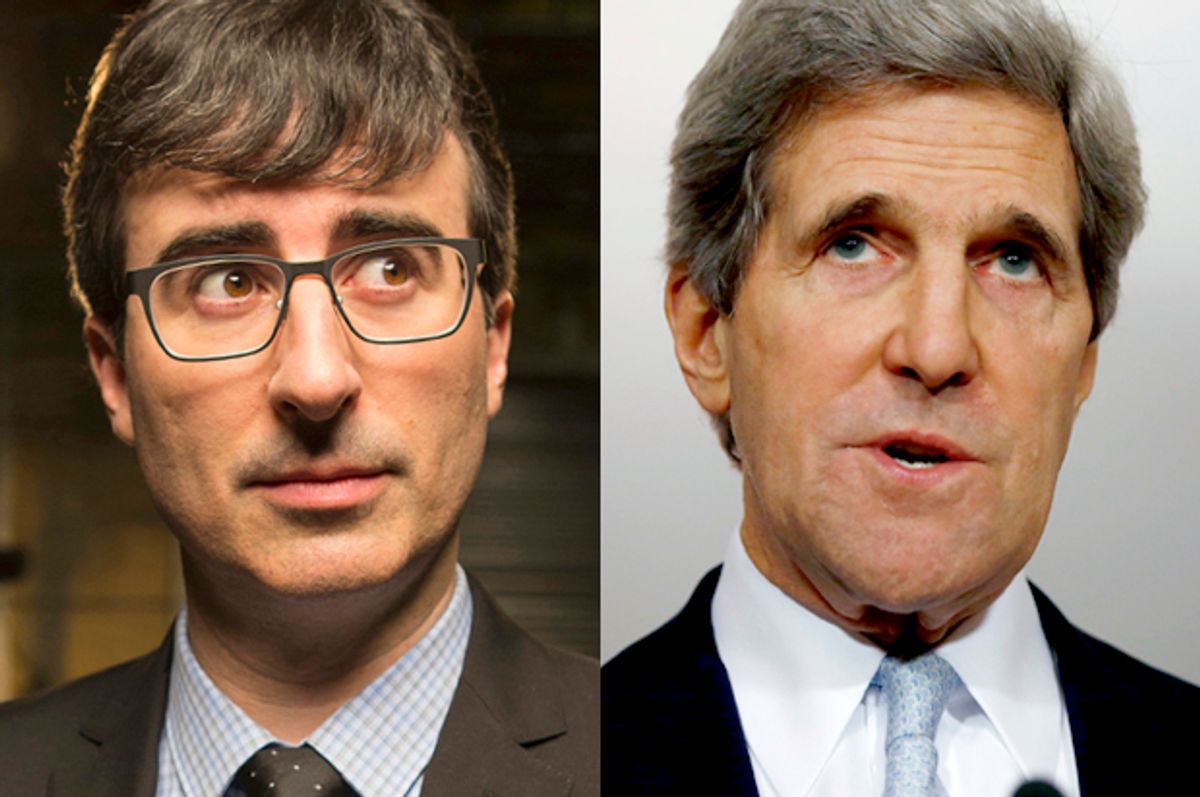 While we fight a war against ISIS with airstrikes on selected targets, the U.S. is also engaging in a war of ideas.  As many who have seen ISIS videos or seen pro-ISIS tweets can attest, the Islamic State group has demonstrated a skill with social media previously unseen in extremist groups.  ISIS has successfully used Internet sites, YouTube, Facebook and Twitter to dangerous effect, often with the explicit goal of recruiting more militants.

CNS reports that “The U.S. military believes around one thousand aspiring jihadists from the Asia-Pacific region have traveled to join Islamic State in Iraq and Syria (ISIS/ISIL), with most recruited via social media.”

The Guardian reports that “ISIS propaganda runs the gamut from the gruesome video-recorded beheadings of journalists James Foley and Steven Sotloff to Instagram photographs of cats with AK-47s, indicating a comfort ISIS has with Internet culture.  A common theme, shown in euphoric images uploaded to YouTube of jihadi fighters parading in armored U.S.-made vehicles captured from the Iraqi military, is Isis’s potency and success.“

To respond to this threat, the State Department opened the Center for Strategic Counterterrorism Communications in 2011 to analyze and answer militant activity on social media.  The office sponsors a range of activities, but what makes this new initiative different from earlier efforts to counter terrorist propaganda is the Center’s entry into social media.  Using Twitter, YouTube and other online channels, the U.S. government launched a campaign called “Think Again, Turn Away.”  But the entry into social media is not the only new feature of this counter-offensive: the other key feature is the use of sarcasm, snark and irony to send anti-ISIS messages.

One of the Center’s recent efforts is an ironic video that uses what appears to be ISIS video footage alongside sarcasm to try to deter recruits. Displaying brutal murders, decapitated heads and a body being thrown off of a cliff, the video includes English captions that say that if you join the group, you'll learn “valuable” skills like "blowing up mosques" and "crucifying and executing Muslims."  The phrase, “Travel is inexpensive because you won’t need a return ticket!” is superimposed over a series of bloodied corpses.  Attempting to reach millennials who often use sarcasm and snark in their own social media, the video employs irony to dissuade people from joining ISIS.

Unfortunately, the video is a failure, with a mere 42,000 views on YouTube of the Arabic version compared to the hundreds of thousands of views of ISIS’s now famous video of the beheading of two U.S. journalists. The failure is bigger than views, though; it may actually be dangerous: many experts consider the efforts to battle ISIS on social media a simple admission of the power of ISIS.  They argue that such attention only invigorates the ISIS cause.

But the danger is not just in the number of views or the mistaken tactic of giving ISIS social media attention; the real danger is in the idea of using irony as an anti-recruiting tactic.  Even John Oliver — the master of sarcastic irony — was astonished to see the U.S. government using irony as an anti-ISIS propaganda tool. As Oliver points out, if sarcasm and irony backfire, you don’t just risk a public that misses the joke; you risk reinforcing the exact message you are attempting to discredit.

The video uses phrases sarcastically: it says one thing and means another.  But research has suggested that appreciation of that form of irony requires higher forms of brain activity.  In other words, sarcasm and irony are the signs of smart thinking.  And those whose minds are leaning towards fundamentalism, who are at risk for thinking in absolutes, are not likely, if even able, to detect sarcasm.

In contrast, experts know that terrorist recruiting depends on lower forms of brain activity, especially the cultivation of fear.  This doesn’t mean that a potential terrorist can’t understand sarcasm or use it; it means that they are not likely to be thinking in that mode at the time that they consider joining a terrorist cause.

The American Psychological Association published a study of the psychology of recruits that suggested that they were inclined towards collectivist thinking, had extreme fears of death, and were likely worried about the west eradicating their way of life.  The Rand corporation published a study that found that a common feature of potential recruits was “Some dependent personality tendencies (e.g., suggestibility, low tolerance for ambiguity).” These studies indicate that the messaging needed to attract the attention of potential terrorist recruits is not the layered, complex mode of ironic sarcasm.

To make it worse, mocking terrorism may backfire since those inclined to consider being recruits are already likely to feel that their cultural beliefs are under threat.  Psychologist and terrorism expert Fathali Moghaddam of Georgetown University's department of psychology explains “You can interpret Islamic terrorism as one form of reaction to the perception that the fundamentalist way of life is under attack.”

And we aren’t even taking into account the poor taste of using irony to mock deaths by Islamic militants.  We once worried whether we could be ironic after 9/11; now we are making ironic jokes about beheadings.

We have significant research to prove that sarcasm and irony are ill-suited to win the hearts and minds of potential terrorist recruits. Not one expert on terrorist recruiting nor one expert on sarcasm and irony would have approved of such a plan.  How is the U.S. anti-propaganda campaign not aware of this research?  At best the video will get no views; at worst it will be misunderstood by potential recruits and will incite further anti-Western hatred.  And that prospect is not funny at all.