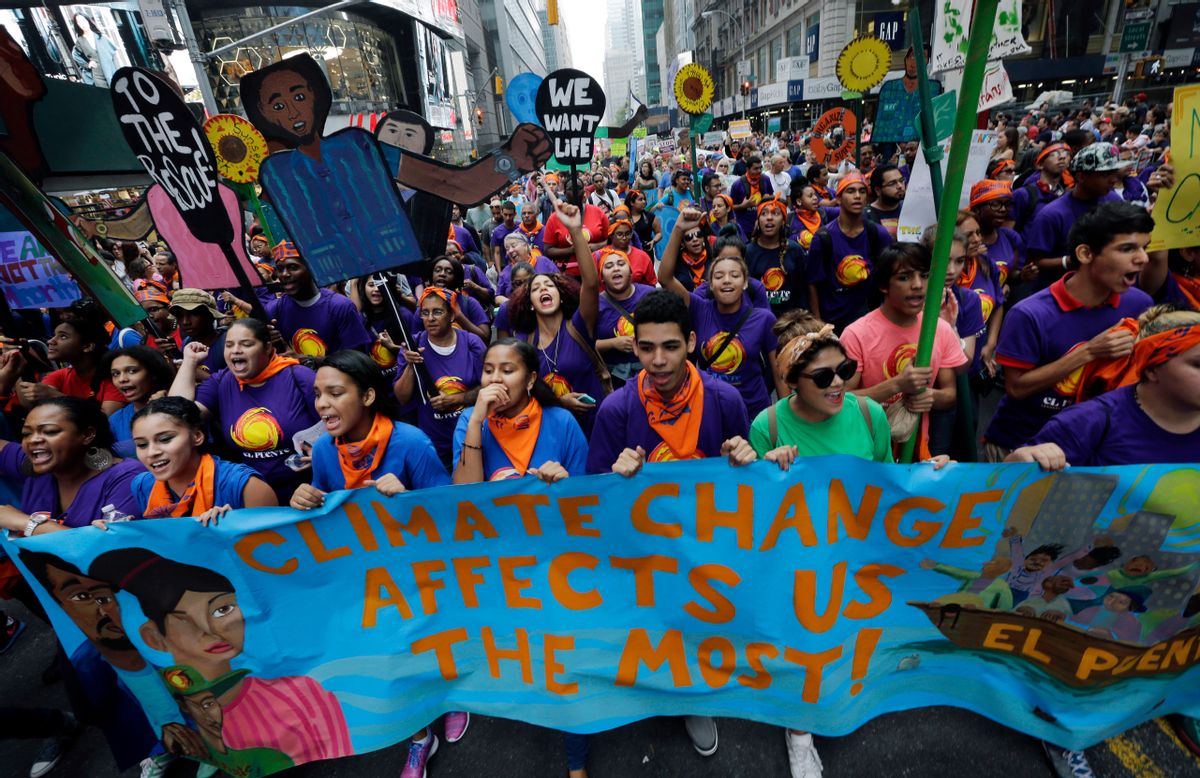 FILE - In the Sept. 21, 2014 file photo thousands of young people fill the streets of Manhattan, New York, carrying banners and calling on policymakers to take action on climate change. According to a new Associated Press-GfK poll, conducted September 25-29, 2014, Americans lack confidence that their government can keep them safe from threats to their safety and economic security. More than half of those polled dont think the U.S. government can do much to effectively minimize the threat posed by climate change, mass shootings, racial tensions, economic uncertainty on Wall Street and an unstable job market. (AP Photo/Mel Evans, File) (AP)
--

WASHINGTON (AP) — Americans lack confidence in the government's ability to protect their personal safety and economic security, a sign that their widespread unease about the state of the nation extends far beyond politics, according to the latest Associated Press-GfK poll.

With Election Day about a month away, more than half those in the survey said Washington can do little to effectively lessen threats such as climate change, mass shootings, racial tensions, economic uncertainty and an unstable job market.

"I think what we've got going on here in America is the perfect storm of not good things," said Joe Teasdale, 59, who lives in southwest Wisconsin and works as an assistant engineer at a casino.

For many of those questioned in the poll, conducted before doctors in Texas diagnosed a Liberian man with the Ebola virus, the concern starts with the economy.

The poll found that 9 in 10 of those most likely to vote in the Nov. 4 election call the economy an extremely or very important issue. Teasdale is among those who say the slow recovery from the recession is a top concern.

Despite improvements nationally, business is far from booming in his state, Teasdale said. He's been supplementing his stagnant salary by renovating and renting out duplexes and has little faith the situation will improve soon. He wants government to get out of the way of business.

"If you're putting so much restriction on them where it isn't practical for them to expand or grow, why should they?" Teasdale asked.

Those surveyed also pointed to events such as the protests in Ferguson, Missouri, that followed the fatal police shooting an unarmed black 18-year-old and the beheading of a woman in an Oklahoma food processing plant, apparently at the hand of a suspended co-worker.

"This is the first time I've felt insecure in my own country," said Jan Thomas, 75, of Stevensville, Montana. "Especially after the beheading in Oklahoma. That's scary."

The poll found that Democrats tend to express more faith in the government's ability to protect them than do Republicans. Yet even among Democrats, just 27 percent are confident the government can keep them safe from terrorist attacks. Fewer than 1 in 5 say so on each of the other issues, including climate change.

"There's too many people who still don't believe that it's happening," bemoaned Felicia Duncan, 53, who lives in Sharonville, Ohio, a suburb of Cincinnati, and works as an office manager at a mechanical contracting company.

Thirteen years after the Sept. 11 attacks, and as the Obama administration conducts airstrikes against Islamic State militants in Syria and Iraq, only 1 in 5 in the poll say they are extremely or very confident the government can keep them safe from another terrorist attack. Four in 10 express moderate confidence.

While there has not been a large-scale terrorist attack on U.S. soil since 9/11, roughly one-third of Americans say they are not too confident or not confident at all in the government's ability to prevent another.

Bill Denison, 85, who lives in Bradenton, Florida, is among the minority who thinks the government is doing a good job keeping citizens safe, at least when it comes to preventing domestic attacks.

"Overall I think that the best job that we've done in this country is with anti-terrorism," he said. "We're doing a magnificent job and so far it's been pretty successful."

Still, he expressed disbelief at the recent security breaches involving Secret Service agents, including an incident in which a man scaled the White House fence and made his way deep into the executive mansion.

"The fact that a guy can run into the White House is pretty disturbing," he said. "But we're only human. And humans are going to make mistakes."

The AP-GfK Poll was conducted September 25-29, 2014, using KnowledgePanel, GfK's probability-based panel designed to be representative of the U.S. population. It involved online interviews with 1,845 adults, and has a margin of sampling error of plus or minus 2.5 percentage points for all respondents.

Respondents were selected randomly using telephone or mail survey methods, and later interviewed. People selected for KnowledgePanel who didn't otherwise have access to the Internet were given free access.