Fox News' weapon of fear: How the right hopes to terrify America before Election Day

For Republicans, public paranoia about Ebola, ISIS and the scary immigrant “other” is a plan to sweep the midterms 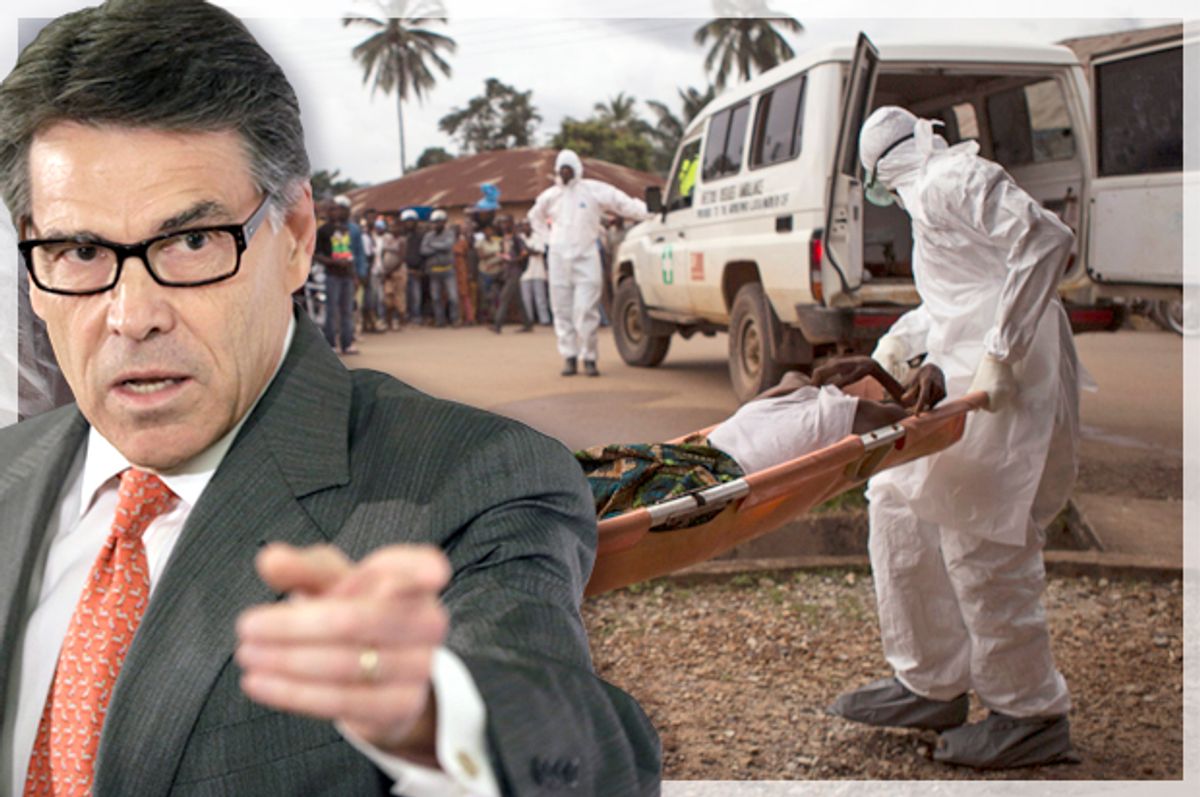 Republicans need one last stroke of luck to take back the Senate and sweep the midterms: They have to find an ISIS fighter who crossed the Mexico border as a juvenile asylum-seeker last summer, who’s since come down with Ebola.

No doubt the folks at Fox, along with James O’Keefe, are hard at work searching for their secret weapon.

It’s all fear, all the time at Fox, ever since the summer panic over tens of thousands of undocumented juvenile immigrants and their families who were being held at the Mexican border. The border crisis subsided – by August, the number of unaccompanied child migrants was below the levels of the year before – and was replaced by ISIS, after the al Qaida rejects beheaded two American journalists and expanded their reach in Syria and Iraq.

But ISIS was a border crisis, too: Remember when the folks at Breitbart thought they found a “Muslim prayer rug” that turned out to be a soccer jersey? And when Sen. John McCain shamed himself by citing James O’Keefe’s idiotic stunt crossing the border dressed cartoonishly as Osama bin Laden, and Matt Drudge was screeching “ISIS at the border?”

This week ISIS risks being upstaged by Ebola, a deadly and contagious disease, of which exactly one case has been diagnosed in the U.S. (several people suffering from Ebola have been brought to the U.S. for treatment). And the answer to Ebola, too, is to shut our borders, halt travel from West Africa and turn away from the world.

The three crises are linked by the way they play on fears of a dangerous “other,” spreading crime, sickness, or terror.

The Central American child migrants were said to be vectors of illness, too; Rep. Phil Gingrey told the Center for Disease Control and Prevention the children carried "deadly diseases" that threaten “Americans who are not vaccinated—and especially young children and the elderly." In fact, research found they were more likely to have been immunized than native Texas children. But once that problem on the border abated, the cameras went away, and we never heard any more about the crisis that wasn’t.

Then came the alleged ISIS border crisis. Midland County Sheriff Gary Painter told Fox and CNN he’d found “Muslim clothing” and “Koran books” on his side of the border. “So we know that there are Muslims that have come across and are being smuggled into the United States.” The wingnuts at Judicial Watch claimed Obama was hiding “the dire threat on the border” from Muslim terrorists.

Now the panic is over Ebola, and some of the same characters are stepping up to stoke the fear. Texas Gov. Rick Perry, who traveled to the Mexican border with Sean Hannity and a machine gun in July to hype the “crisis” there, now thinks he’s going to ride Ebola to the White House. Wearing his impressive spectacles, Perry announced Monday that he’d set up a task force on infectious diseases, and he lectured President Obama about his lax response to the crisis.  Other 2016 presidential hopefuls joined him. Sen. Rand Paul accused Obama of lying about how Ebola spreads. Gov. Bobby Jindal demanded a travel ban on West Africans.

Right wing pundits have been even more disgusting, bringing it all back to Obama, predictably, since his father was an African immigrant. Laura Ingraham claims the president’s “core ties to the continent” are impeding a swift crackdown on the disease. Rush Limbaugh says Obama wants Ebola to spread because the U.S. deserves to be punished. And the illustrious felon Dinesh D’Souza won Monday with a Tweet that was off the charts in its idiocy:

This is all the right can come up with as a closing argument in the 2014 midterms. They have no policy agenda and demography is against them, but fear will always be with them. Ironically, to the extent that we have anything to worry about in the government’s handling of Ebola, it might have to do with GOP-imposed cuts to the CDC, the NIH and medical research generally. We don’t have a Surgeon General because of GOP obstruction. Republican governors have weakened the public health infrastructure with budget cuts and their petulant rejection of federal Medicaid expansion. And the fear of foreigners, particularly Africans, stoked by Ebola panic is counterproductive, too, because the only way to contain the disease is for the U.S. to support caregivers in the places ravaged by it so they can respond more effectively.

I’ve found myself thinking about the panic over New York’s so-called “Ground Zero Mosque” during the 2010 midterms., another issue manufactured purely for GOP demagoguery. Florida Gov. Rick Scott ran ads blaring his opposition to it, and so did other minor Southern politicians. The midterms passed, the mosque opened and we’ve heard nothing about it, on the national news, ever since.

Seriously, this is all Republicans have – serial paranoia – but it might be enough to win in November. They just have to scare their elderly white base into voting, while doing what they can to suppress the votes of Democrats. Both are proceeding on target.