Remember how dudes glorified "Fight Club"? It's happening with women and "Gone Girl," too 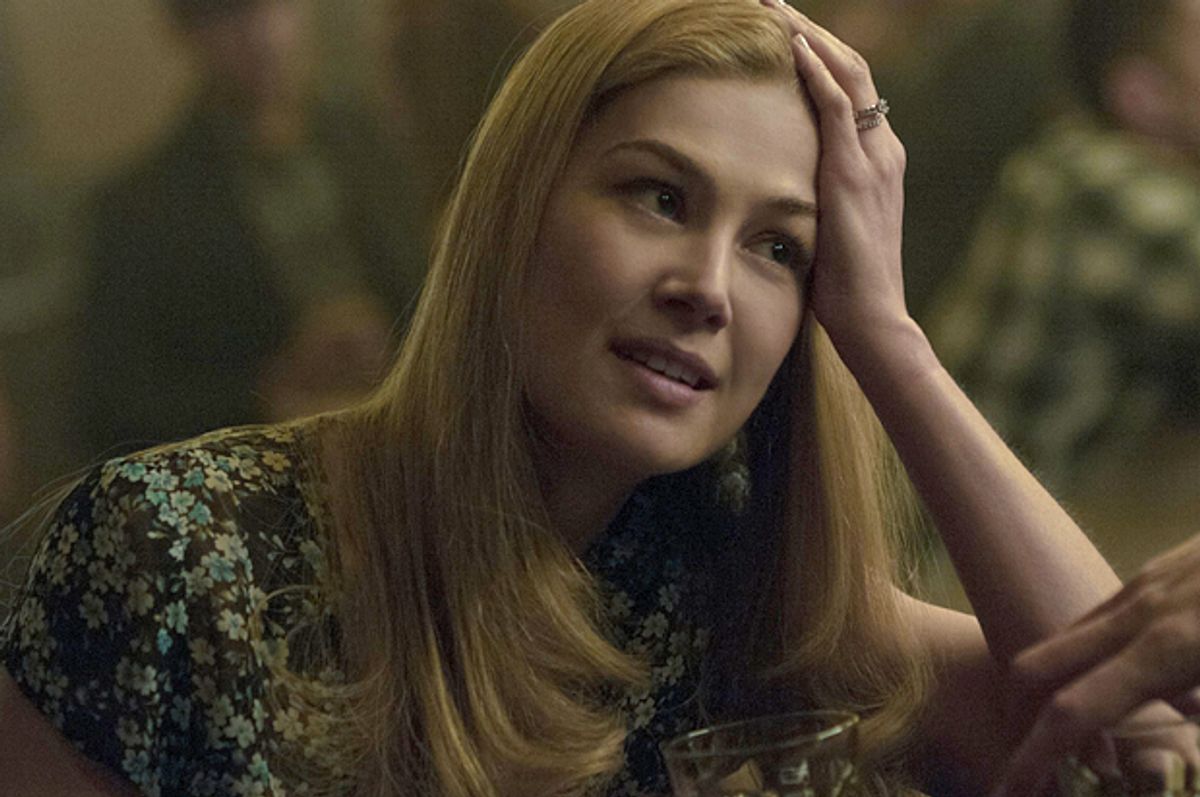 Spoiler alert: Amy Dunne, the titular missing person of “Gone Girl,” Gillian Flynn’s novel-turned-David Fincher film, is a psychopath. I state the obvious, because apparently it’s not so obvious. The lady fakes her own murder in order to put her cheating husband in the electric chair and still readers have referred to Amy as a “kind of feminist” and an “unlikely heroine.” Her infamous “cool girl” tirade, the one that puts women who profess to love chili dogs on the level of orgasm fakers--a.k.a. undying man-pleasers--is basically a novella unto itself at this point. The passage alone has more fans on Goodreads than Malcolm Gladwell. And recently Vulture specifically called out “the cool girl speech” as a prime reason to reread Flynn’s novel.  But Amy’s neither a feminist nor a heroine. She’s the villain. This isn’t to say that her husband Nick is by default the good guy. As he says himself in the movie, “I didn’t murder my wife, but that doesn’t mean I’m not a bad person.” Still, it’s almost as if there’s such a cultural dearth of female “bad guys” that we have trouble recognizing one on the screen in front of us for close to two and a half hours.

Dunne's maligned-wife routine seems to resonate with women in a way that is not dissimilar from the way a character from another Fincher movie, Tyler Durden, resonated with men. I’m sorry to ask you to remember this, but do you remember the way dudes glorified “Fight Club”? There were those hand-on-foaming-soap posters in every dorm room. Frat boys made their entire “About Me” sections on Facebook a compendium of Durden koans: “You are not a beautiful and unique snowflake.” “It's only after we've lost everything that we're free to do anything.” And of course: “I want you to punch me as hard as you can.” (Okay! No problem!) Members of the male species actually started real-life flight clubs. Tyler Durden became a pop culture hero to a certain quarter of the male population. Namely dudes who like Red Bull and Red Pill.

The danger of taking Dunne as a reliable or even aspirational character is that everything she does or writes or says is fueled by an all-consuming egomania and complete lack of empathy, because, as we’ve established, she is certifiably mental. Also she’s kind of a misogynist! Her super-dark “First Wives Club”-esque revenge be damned. Sure, the cool girl speech may seem more applicable than ever these days. The new FX show “You're The Worst” features the ultimate I-don't-want-anything-from-you Cool Girl lead in Gretchen, who uses a vibrator attached to Christmas lights because she’s too chill to buy an extension cord. Last season Amy Schumer aired a funny sketch where a group of dudes waxed on and on and on about girls who eat burgers and drink beer and fart until it became clear that these guys actually wanted to sleep with men.

But whereas in the Schumer sketch the joke is on the dudes, in Dunne’s worldview a good portion of the blame lands on these women who couldn’t possibly do things like drink cheap beer and watch football for the simple fact they enjoy things like cheap beer and football. They’re the “awful pretenders” that dumb men must be saved from by learning the truth: “The bitch doesn’t really love chili dogs that much – no one loves chili dogs that much!”

In Fincher’s movie, the speech somehow ends up seeming even more offensive at first glance. It’s delivered via voiceover as Amy is making a run for it, cruising down the freeway. She looks to her left and sees in an adjacent car a brunette girl with dreads and ear gauges and concludes that this woman’s boyfriend must be into tattoos and comics. To her right is a car with two women laughing and, therefore, Amy declares, they must have boyfriends who like hamburgers and Hooters (the restaurant, but presumably also breasts).

Meanwhile, there are zero men present for whom these girls would hypothetically be performing. They could be single, or lesbians, for all we know. It’s possible that this shift in target is a sign of Fincher missing the point, as some have already argued. But it seems just as likely to me that Flynn herself made this change to distance herself even more from the ravings of Amy: to show us that this much-cited rant contains more crazed disdain for womankind than sociological insight. Also, to remind us not to put too much cultural stock into monologues spoken by psychopaths. It's a lesson Tyler Durden could have taught us long ago, if we weren't so busy eating chili dogs.