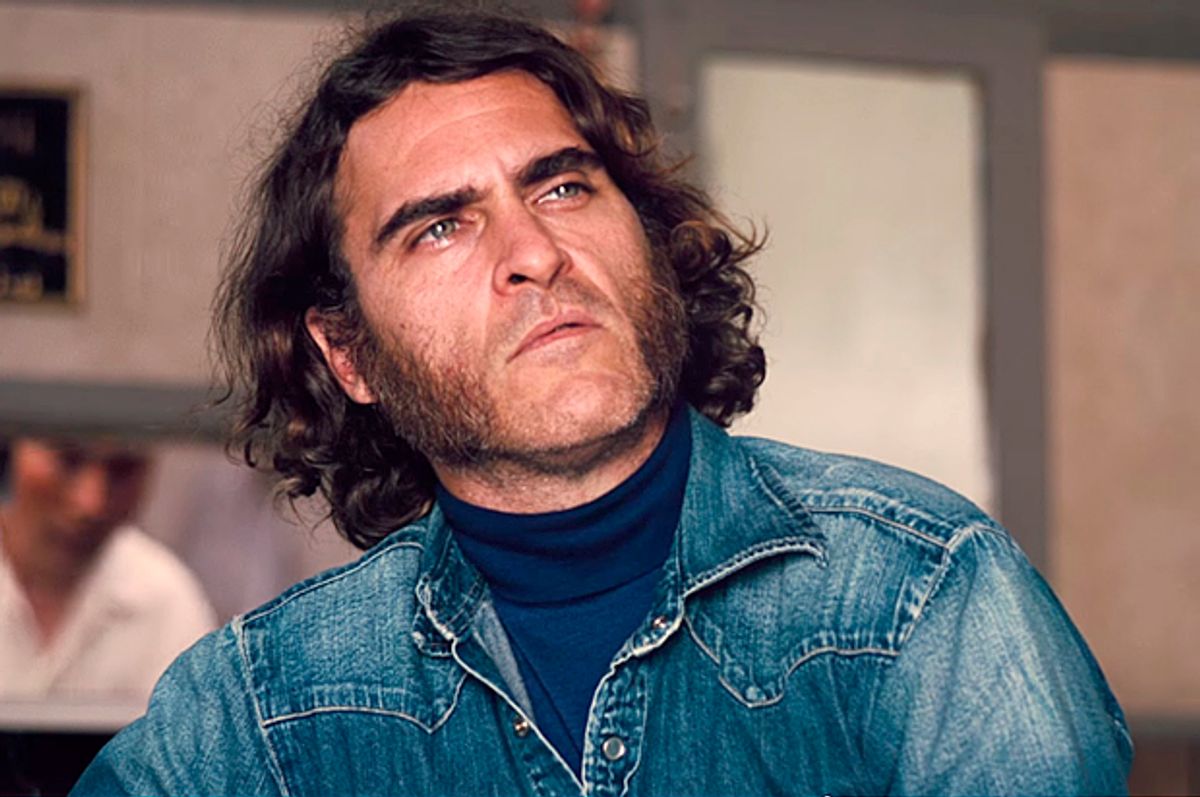 Novelist Thomas Pynchon and filmmaker Paul Thomas Anderson are on such similar quests, pursuing threads of meaning into the American past in search of an answer to David Byrne’s famous question (“How did I get here?”) that their eventual convergence, with Anderson’s new film adaptation of Pynchon’s “Inherent Vice” feels almost inevitable. To be fair, the impulse to resurrect and reinterpret the recent past is the driving force behind much of literature and much of cinema. That’s certainly how classic crime films work, and it’s as neat a fashion as any to tie together the greatest modern novels, from “Ulysses” to “The Great Gatsby” to the biggest whopper of all, Proust’s “In Search of Lost Time.”

Still, there’s an essential vibration of sympathy – a crazy vibration, or a vibration in response to the craziness of the world – that ties together Anderson and Pynchon. If anything, Anderson’s last two movies, “The Master” and “There Will Be Blood,” feel more like Pynchon novels than this one does. My initial feeling, after one viewing at a sardine-packed Saturday morning screening at the New York Film Festival (and I’m reserving the right to take all of this back) is that “Inherent Vice” has moments of greatness, and maybe even profound currents of greatness, including yet another tremendous performance from Joaquin Phoenix that should win major awards but won’t. But it’s also an incredibly uneven patchwork job that may wind up in the category of Interesting Failure. (One friend, who hasn’t seen it, asked me whether “Inherent Vice” qualifies as the “Hudsucker Proxy” of Anderson’s career. Not bad!)

We won’t see “Inherent Vice” in theaters for paying customers until the middle of December – and it won’t reach national release till January – so I won’t try to write a full review of a thorny, zany tragicomic odyssey that calls out for a repeat viewing. But the critical buzz has been intense after the world premiere of “Inherent Vice” at Lincoln Center over the weekend, so a little preview sampler may be in order. Anderson is working from what is is arguably a minor Pynchon novel (though let’s set that argument aside) but is certainly his most movie-friendly, a loopy and tangled detective farce set among the debris and decay of Los Angeles circa 1970. To answer some people’s first question: Does the famously reclusive Pynchon personally appear in “Inherent Vice,” in his first pop-culture cameo since “The Simpsons”? Hell, I don’t know. There are any number of stoned group scenes that could feature a bucktoothed 77-year-old guy somewhere in the background – and if I knew for sure I wouldn’t tell you, so there.

“Inherent Vice” partakes of two traditions that are already interlinked: the stoner farce and the L.A. film noir. It’s already a cliché to describe the film as a combination of the Coen brothers’ “The Big Lebowski” and Robert Altman’s “The Long Goodbye,” and while that doesn’t capture everything it’s close enough to be irresistible. I actually suspect that Pynchon’s novel is not so much channeling Raymond Chandler as the underappreciated Ross Macdonald, whose hardboiled detective hero Lew Archer often confronted the mounting debris of the 1960s and the fast-changing social dynamics of California.

Phoenix’s character, Doc Sportello, a hippie private eye in a beach town on the western fringes of L.A. (it’s more or less Manhattan Beach, where Pynchon once lived), is more baked than boiled and is a long way from the “straight world” of guys like Archer. Still, he lives by his own creed, like any noir hero: Along with unwashed feet and copious amounts of weed, Doc believes in the possibility of human redemption, which requires considerable blind faith in the disillusioned L.A. at the dawn of the Me Decade. In the wake of Altamont and the Manson murders, the counterculture has turned sour and the Vietnam War is escalating. The white conservative backlash symbolized by Orange County and its native son in the White House, Richard Nixon, has seized the cultural momentum. Still, Doc’s native inclination is to resist the allure of money and to give everyone a chance, even Aryan Brotherhood members, FBI informants and his flat-topped nemesis, a sadistic LAPD detective called Bigfoot Bjornsen (Josh Brolin, who finds a strange soulfulness within a guy who could’ve been a caricature).

If those instincts don’t always serve Doc well, he may not be accounting for the legal concept referenced in Pynchon’s title. It specifically refers to the fact that many contracts involve bad things that cannot be avoided: If you transport eggs, some of them get broken. There’s no need to delve too far into the metaphorical possibilities here. Let’s just say that even the ever-stoned Doc is aware that when his ex-girlfriend Shasta (Katherine Waterston) shows up one night with a strange story about an extortion plot and a missing real-estate mogul she’s been sleeping with, it’s a little too much like the opening of a detective movie. And the next day, when a completely different client points Doc toward the selfsame neo-Nazi-connected Jewish millionaire, Doc scribbles “paranoia alert” in his little detective notebook.

Marvelously photographed by Robert Elswit in a muzzy, sunlit L.A. haze, with a customarily lovely Jonny Greenwood soundtrack, “Inherent Vice” is crowded with delights, and maybe overcrowded. There’s too much voiceover narration, too many competing Doc girlfriends (one of them an acrid assistant D.A., played by Reese Witherspoon), a jokey whorehouse scene that completely doesn’t work, and drop-in roles for Owen Wilson, Benicio Del Toro, Martin Short and Maya Rudolph, among others. Doc finds himself on the trail of a nefarious organization or entity called the Golden Fang, but if you think we’ll ever understand what that is, or that anyone, you and me and Doc included, can ever outrun it or defeat it, you also are neglecting to account for inherent vice. I look forward to much more discussion of this movie, and I can’t wait to see it again.