Secrets of the bailout, exposed: Why you should be watching the AIG trial

To this day, information on the banks' heist and how it went down is pathetically scant. That's about to change now 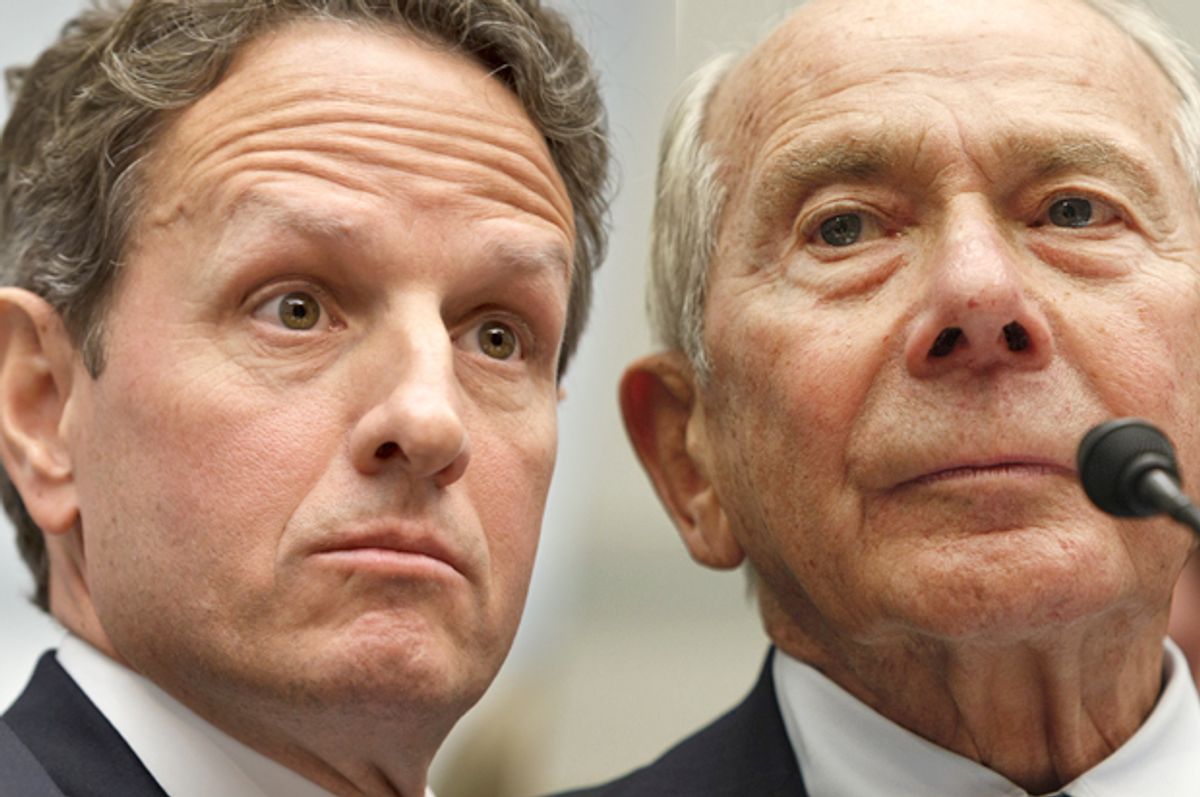 But as I wrote recently, regardless of the outcome, this trial should matter to every American. In fact, just in its first week, we’ve learned a lot of new information about how the bailout architects– then-Treasury Secretary Henry Paulson, ex-Federal Reserve chair Ben Bernanke, and former president of the New York Fed Timothy Geithner – conducted themselves amid the chaos of the financial crisis. And it doesn’t reflect well on any of them, with concealed information, bait-and-switches, and favorites played among financial institutions. As these three prepare to take the stand this week in the case, we should be pleased to finally have this debate about the bailout in public.

Unlike virtually everyone reporting on the case, Naked Capitalism’s Yves Smith unearthed the Greenberg legal team’s “Proposed Finding of Fact,” which provides the basis for their claims: that AIG shareholders, including him (Greenberg was ousted as CEO in 2004 but retained a large stake in the company) were treated in a punitive and unconstitutional manner by the government. This is obviously only one side of the story, but it features several nuggets that the voluminous documentary history of the AIG bailout – from government reports by the Congressional Oversight Panel and the Special Inspector General for TARP to crisis narratives like Andrew Ross Sorkin’s Too Big to Fail – never managed to cover.

For example, the central justification for the bailout was that AIG had no ability to raise capital from the private market to cover short-term debts to its creditors. But the finding of fact presents evidence that multiple sovereign wealth funds, including the government of Singapore, China’s Investment Coproration, and a consortium of Middle Eastern investors, wanted to invest in AIG. China was “willing to put up a little bit more than the total amount of money required for AIG,” according to the finding. But Paulson rejected these offers, instead implementing the eventual plan, which gave the government an 80 percent equity stake in AIG in exchange for an $85 billion loan, one that subsequently ballooned to $182 billion.

While foreign investors could have created additional problems for AIG, and while they were obviously looking for a fire-sale deal to strip out the best-performing parts of the business, the offer could have kicked off negotiations to round up the financing needed to carry on, and avoid a bailout. It’s not so much Paulson’s rejection as the immediacy of that rejection, and the fact that the public never knew about this, that raises alarms.

Similarly, the finding claims that the New York State Insurance Department stood ready to allow AIG to “access $20 billion in liquid assets from certain AIG insurance subsidiaries,” about one-quarter of the government’s eventual commitment. But in a deposition, Superintendent of Insurance Eric Dinallo said that Geithner told him “No, we’re good,” turning down the offer.

The bailout architects also denied AIG the opportunity to convert to a bank holding company, so they could access discounted loans from the Federal Reserve. Goldman Sachs, Morgan Stanley and even American Express performed this technique to get cheap loans from the Fed.

Instead, the government took an equity stake in AIG. And according to the complaint, they engaged in a bait and switch. The government handed AIG CEO Robert Willumstad a vague, two-page term sheet on September 16, 2008, and gave him two hours to get approval from the board. Nobody on the board saw a term sheet, and even today, Treasury and the Fed refused to provide that term sheet for the trial.

Willumstad signed the term sheet, and five days later, after he was axed as CEO, the Federal Reserve Bank of New York changed the terms, according to the findings from Greenberg’s legal team. They changed the form of equity from non-voting to voting stock, to avoid a shareholder vote that could “reclaim the company,” in the words of Treasury General Counsel Stephen Albrecht. And they told the AIG board to take it or leave it, basically cornering them into accepting the terms.

The New York Fed never got approval from the Federal Reserve Board of Governors for these changes, and the findings are littered with quotes from Bernanke, Geithner and Paulson saying that such a move to acquire equity and voting shares is illegal, even in “exigent and unusual circumstances” like the AIG bailout. To get around these legal niceties, the New York Fed put the equity into a trust, a shell corporation with only three trustees, all of whom were longtime Fed employees. But the government was clearly operating AIG at this time, even before the board signed off.

Why was the New York Fed so gung-ho to take over AIG, turning down multiple alternatives and breaking rules to make sure they could exercise near-total control of the company? According to this theory, it was to ensure that AIG’s counter-parties, mostly big banks that had their own troubles at this time, would get paid off on their AIG debts in full. This is exactly what happened, and Greenberg calls it a “backdoor bailout,” enriching banks central to the financial system at the expense of AIG shareholders. Effectively, the government laundered money to the banks through AIG.

It should be said that Greenberg is not a reliable narrator. He’s a guy trying to win a bunch of money from the government. Some of his points are questionable, and others are judgment calls. The idea that AIG Financial Products ended their exposure to subprime loans through credit derivatives in 2005, for example, has been contradicted in crisis narratives. And the government has claimed all along that they had to pay off counter-parties at par to reduce systemic panic. The danger of panic has been trotted out repeatedly to justify the government’s actions, in fact.

In other words, the claims made in this case are arguable. But it’s nice that we can now get to argue them. The narrative of the bailouts has been delivered on high from unquestioning journalists and their self-serving sources. That we didn’t know about the sovereign wealth fund bids to invest in AIG, or the New York Department of Insurance’s offer, or the government’s apparent bait-and-switch and violation of multiple rules and standards for acquiring an equity stake, for six years after the bailout is astonishing. Indeed, last week, we learned that analysts inside the New York Fed thought Lehman Brothers might have been solvent, information that was never delivered to the decision-makers as Lehman was allowed to fail. Again, this was a hidden history until just a few days ago.

And if we’re still getting new information about the AIG bailout, perhaps the most widely documented portion of the government’s crisis actions, then what don’t we know about the whole variety of activities taken, possibly to benefit some financial institutions and punish others?

We all know the adage that history gets written by the winners. In this case, a very rigid narrative of the bailouts took hold, featuring the swashbuckling actions of governmental leaders who made the hard choices necessary to save the financial system. But because of one ornery ex-CEO, we’re getting another draft of that history, one that displays the bailout as chaotic, selective and in many cases one where laws got thrown out the window and raw power ruled.

As the taxpaying public who fronted the money for all this activity, we should get to know the truth. And the next time the country is faced with such a situation, policy-makers should think twice before heading down the same path, mindful that their dirty laundry will eventually get aired.

POSTSCRIPT: Henry Paulson testified Monday in the trial, confirming the disparate treatment of AIG relative to banks like Citigroup, but saying that circumstances warranted it because those banks were more essential to keeping the financial system afloat. He said that the government had to treat AIG harshly to win political support. (Of course, the government didn't treat AIG that harshly, gifting them a carryover tax benefit worth $35 billion and letting their executives take bonuses in 2009.) Paulson also acknowledged the private bid for AIG from China Investment Corporation, but asserted that they wouldn't have followed through on the bid without a government guarantee, even though, he admitted, he never talked to the Chinese.
Timothy Geithner takes the stand Tuesday.