From sexual perversion to high-school shootings, this is how "AHS" tackles the most culturally sensitive subjects 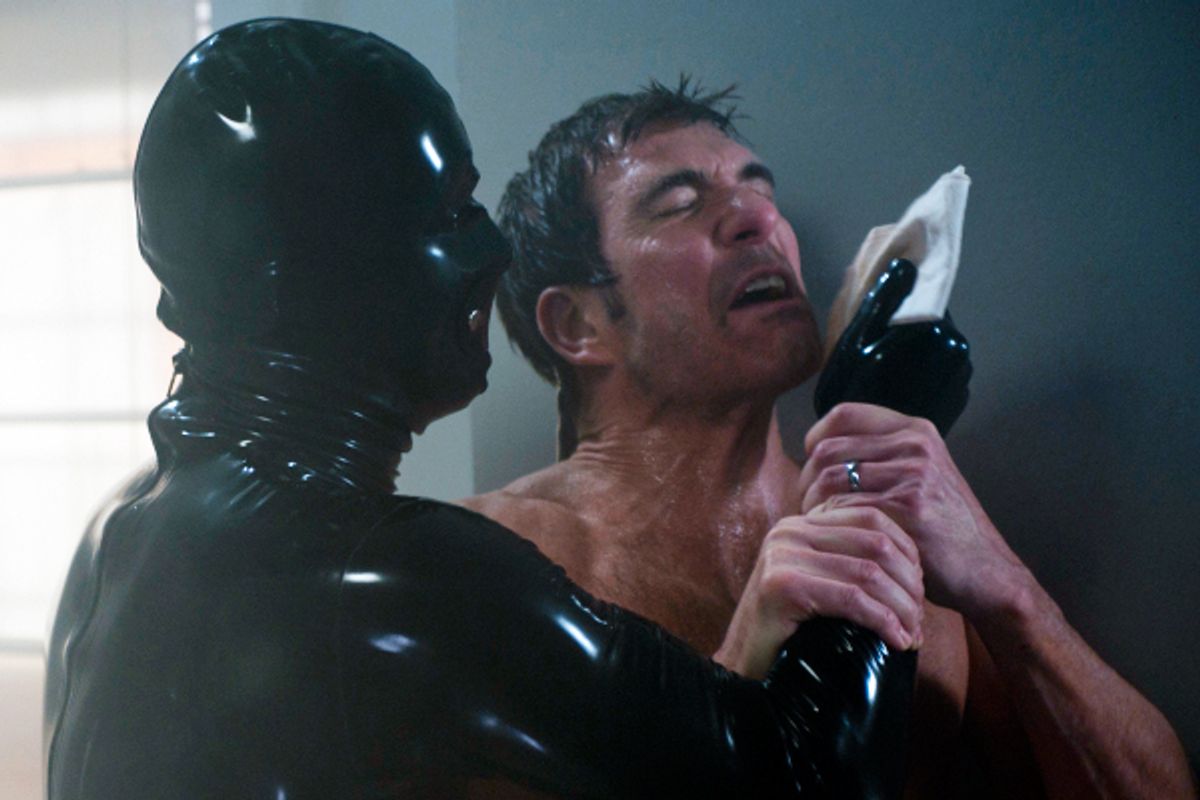 The first season of “American Horror Story,” retroactively titled "Murder House," was a family drama set in a haunted house, dealing mainly with the consequences of lust. "Asylum" followed by taking place in, well, an insane asylum, sprinkling in Nazis, alien abductions, and demonic possession. The third season, "Coven," threw voodoo into the mix. At the heart is Jessica Lange, whose supporting role in Murder House stole every scene.

Always premiering around Halloween, the show aims to make viewers squirm not only by offering up a bonanza of gore, but also by digging through a grab-bag of taboos in Western culture.

The show can be a mess; it can feel like the writers are spackling plot holes. But the creators know how to shock and disgust viewers every Halloween, often relying on actual viscera to generate a visceral reaction. It keeps me and nearly 8 million others tuning in each week. Add some serious star power, including Lange, Angela Bassett, Kathy Bates, Patti Lupone, James Cromwell, and Chloe Sevigny, and you have a hot fudge sundae of the macabre.

With the fourth season, "Freak Show," premiering tonight, here is how the show deals with some of most culturally sensitive subjects:

The series is nothing if not constantly pushing the boundaries of sexual taboos. "Murder House" has the recurring Rubber Man (a demon dressed in head-to-toe squeaky vinyl), which turns out to be the ghost of a teenage high-school shooter who impregnates Vivian Harmon (the mother) with a demon baby and then seduces her daughter, Violet (are you following me?). The house itself serves as the place of escape and futile second chances for Ben Harmon’s raging infidelity.

In "Asylum," Sevigny’s character is treated as a personal mutilation toy by the ex-Nazi doctor. "Coven" takes on not only drunken frat boy gang rape, but also the modern day horror of having the humiliating crime recorded and blasted across the internet for all to see – a reminder that even suffering is no longer private. "Coven" also tackles beastiality when Queenie mounts a minotaur; incest when “Frankenkyle” returns to the living and soon after, to too much mother lovin’; and a quasi vagina dentata with Zoe accidentally killing any mortal man she beds.

Set in New Orleans with flashbacks to the antebellum South, "Coven" was full of flagrant racism. Barely an episode passed without Bates playing Madame Delphine LaLaurie hissing “negress” or “slave” at Queenie.

LaLaurie, who was a real 19th century New Orleans socialite, kept a gruesome torture chamber for her slaves. In the series, LaLaurie is condemned to eternal life by voodoo queen Marie Laveau (Bassatt), who buries her alive in 1834. "AHS"’s Laveau is also based on a historic voodoo queen of the same name who, like in the show, was also a fabulous hair dresser.

When LaLaurie is unearthed in 2013, we see a hysterical scene with her weeping over the realization that an African American man is president (“oh no… why oh lord have you forsaken this once proud country?... That banshee box lies”). Supreme Witch Fiona Goode (Lange), in a random moment of moral integrity, makes LaLaurie Queenie’s personal slave because “there’s nothing [she hates] more than a racist.”

In addition, "Asylum" had Cromwell playing a Josef Mengele-like doctor, freely continuing his experiments in the nuthouse.

As the name suggests, all of Coven is based on a central taboo – witchcraft. The season’s premise is a New Orleans school for witches, a sort of Hogwarts but with a power-hungry, Chanel-wrapped Fiona (Lange) substituting for magnanimous, grandfatherly Dumbledore. Just as potent is Fiona’s archnemesis, the voodoo queen Laveau. While wizardry and witchcraft are the stuff of children’s books today, back then suspected heretics could be stoned or burned.

Starting in sixth century B.C., the good book dealt out some seriously bad punishments: Leviticus  20:27 – A man also or woman that hath a familiar spirit, or that is a wizard, shall surely be put to death: they shall stone them with stones: their blood shall be upon them.

Witchcraft paranoia peaked between 1500 and 1660, when Europe executed between 50,000 and 80,000 suspected witches. And of course, the Salem Witch Trials during the Summer of 1692 saw nineteen men and women convicted of witchcraft, carted to Gallows Hill and hanged. As Fiona proclaims, “when witches don’t fight, we burn.”

"Murder House" tackled one of modern day’s greatest horrors – mass high-school shootings. Episode Five revealed that Violet’s cute crush, Tate, is the ghost of a teenage boy who shot several classmates and a teacher more than a decade before. This episode premiered just a year before the Sandy Hook tragedy, its prescience making it all the more chilling.

Being dismembered and then having a couple of giggling, horny witches sew you back together with your friends’ random body parts would make anyone a little cranky. Zoe, the good witch, decides to do right by Kyle-turned-Frankenboyfriend and return him to his mom. Little did she know that he and mom have had an incestuous relationship. Dying and resurrection have left sensitive and charming Kyle unable to express his emotions (with most of "Coven" having Evan Peters merely grunt and flail, it’s tough to show off the ol’ acting chops). Not thrilled with his mother’s advances and cringe-worthy declarations of “momma knows how to please you,” Kyle bludgeons his mother to death with a trophy.

What’s a show around Halloween without the fear of death by other human hands? Every season so far has had mass murder on the mind, starting with "Murder House" and the serial killer junkies, Rubberman and Tate’s high-school shoot out. Asylum revealed that the psychiatrist, Dr. Thredson (Zachary Quinto), was actually the serial killer Bloody Face, Santa Claus (played by Ian McShane, who has a knack to make a villain into a complete delight) got committed to the asylum as a result of his Christmas killing spree. The Axeman (based on an actual killer in New Orleans) meets his match when a bunch of witches kill him and eternally sentence him to the coven’s house as a ghost. And Fiona will cut anyone obstructing her path to power and eternal youth.

This paves the way for a "Freak Show" that is chock full of  taboos. With the backdrop of a circus sideshow, expect a barrage of the contortionists and tattooed "freaks" shown in the teasers. Beyond that, maybe some scarification and branding. I wouldn’t be surprised if the Lizard Man makes a guest appearance. Look for spins on nonfictional characters, such as "Murder House"’s Black Dahlia, "Asylum"’s Anne Frank, and "Coven"’s Axeman, LaLaurie and Laveau. And watch out for Lange playing a Marlene Dietrich-like character – could that sundae be any sweeter?