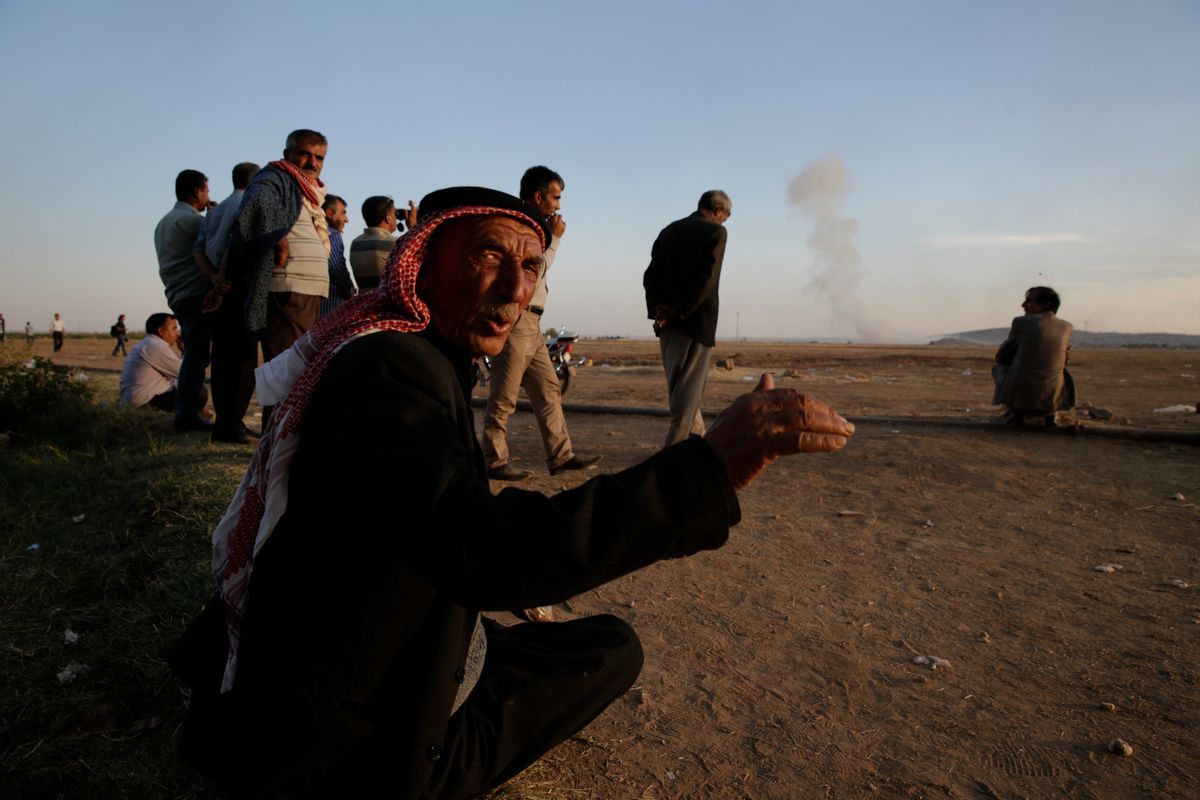 Turkish Kurds watch as airstrikes hit Kobani, inside Syria, as fighting intensifies between Syrian Kurds and the militants of Islamic State group, in Mursitpinar, on the outskirts of Suruc, at the Turkey-Syria border, Wednesday, Oct. 8, 2014. Kobani, also known as Ayn Arab and its surrounding areas have been under attack since mid-September, with militants capturing dozens of nearby Kurdish villages. (AP Photo/Lefteris Pitarakis) (AP)
--

The checks will include taking the temperatures of travelers arriving from West Africa at New York's JFK, Washington Dulles and the international airports in Atlanta, Chicago and Newark.

Despite intense but delayed treatment, Thomas Eric Duncan died from the deadly virus in a Dallas hospital.

Officials say U.S. and coalition airstrikes have forced some Islamic State militants out of Kobani, but it may yet fall under the extremists' control because air power alone cannot prevent it.

Version 2.0 of Obama's health insurance website has some improvements as well as at least one early mistake and a new challenge.

5. WHY UNCERTAINTY REMAINS FOR GAY MARRIAGE

Couples in Las Vegas wondered whether they'd be allowed to wed, and partners in Idaho dealt with disappointment after a ruling blocked them moments before they would have picked up marriage licenses.

6. OBAMA'S FRIENDS ARE FEW AND FAR BETWEEN

The disenchantment with Obama is in part a reflection of inevitable fatigue with a president entering his final years in office, but some say it is also a consequence of the his insular approach to governing.

Investigators found a journal left by ambush suspect Eric Frein that describes how he opened fire on two state troopers outside a rural police barracks — watching one of his victims fall "still and quiet."

8. WHERE WOMAN WITH CANCER PLANS TO END HER LIFE

If Brittany Maynard's brain cancer does not kill her in October, she plans to take advantage of Oregon's Death with Dignity Act and end her own life on the first of November — a few days after her husband's 30th birthday.

9. CHEMISTRY NOBEL GIVEN FOR SUPER-ZOOM MICROSCOPES

The microscopes have much sharper vision than was thought possible, letting scientists peer into living cells with unprecedented detail to seek the roots of disease.

10. WHAT'S THE BUZZ IN ARIZONA

The state is in the midst of one of the wettest summers on record, causing an invasion of an unlikely pest for the desert region: mosquitoes.