"She rattles the institution": How Sonia Sotomayor is transforming the Supreme Court 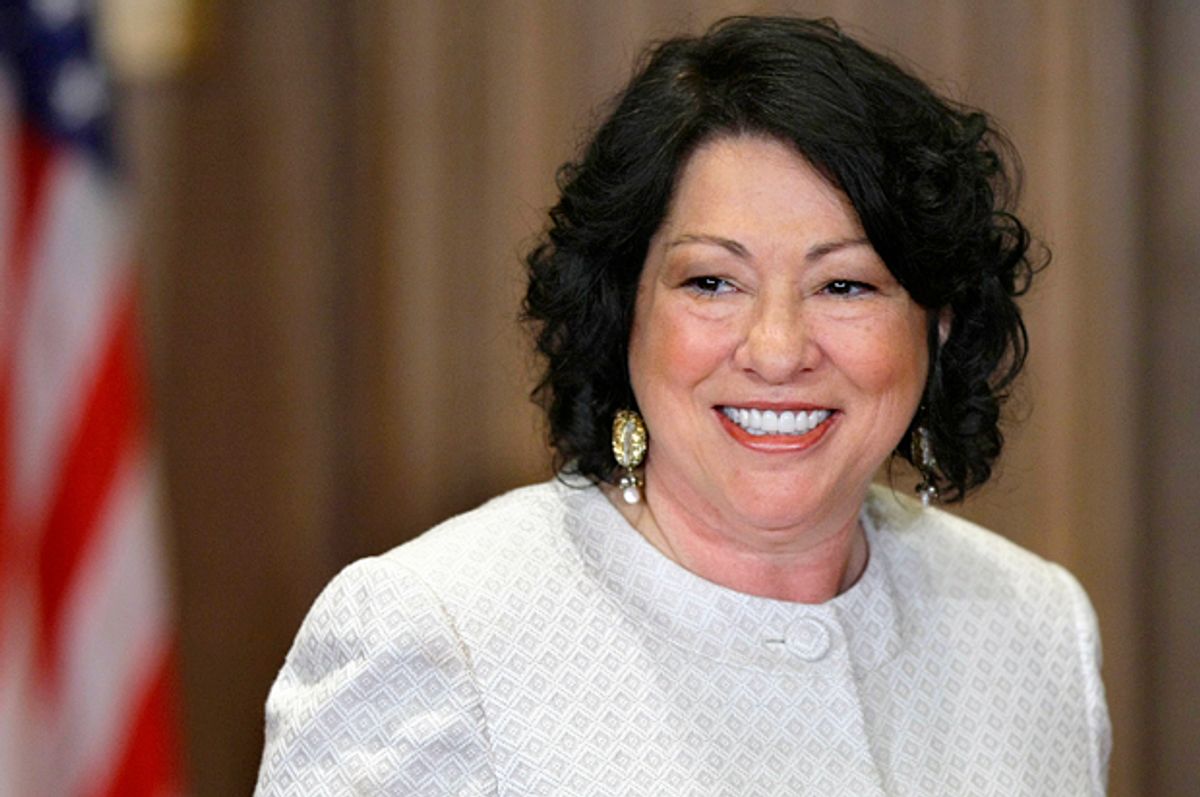 Sonia Sotomayor arrives to be sworn in as the Supreme Court's first Hispanic justice and only the third woman in the Court's 220-year history. (AP/J. Scott Applewhite)
--

Keeping in mind that most of us are still a bit fuzzy on the whole three branches of government thing, it shouldn't be a surprise to find that Justice Sonia Sotomayor, despite being the first Latina member in the high court's history, remains something of a mystery to most Americans. The fact that the Supreme Court is infamously tight-lipped and secretive — so much so that we often only find out the real story behind historic cases decades after they've occurred — certainly doesn't help.

But while many Americans may still not have much of a feel for Justice Sotomayor, journalist and author Joan Biskupic's new biography, "Breaking In: The Rise of Sonia Sotomayor and the Politics of Justice," makes a persuasive case that the Court's first Latina is already having great influence over the legal questions that, whether they know it or not, influence all Americans' lives. And she's doing it, in part, by shaking up one of the most staid and conservative institutions in the world.

Earlier this week, Salon called up Biskupic to discuss Sotomayor's growing influence as well as how her life story reflects that of Latinos in America more generally. Our conversation is below, and has been edited for clarity and length.

First off, what made you want to write about Justice Sotomayor? You've written about other Supreme Court Justices before, of course; but was there anything about her, specifically, that intrigued you? Or was it more about her historic role as the first Latina Justice in the history of the Court?

I was more interested in the connection between her rise and her life and her career and the parallel rise of Latinos in America. I didn't want to do a straight biography because she's so new to the Court; in that way, this differs from my books on Justice O'Connor and Justice Scalia.

Here she was, born in 1954, the year of Brown v. Board of Education — but also the year of Hernandez v. Texas, when the Supreme Court for the first time said that Hispanics could be a protected class of people, just like African-Americans — and then she enters Princeton in '72, the year of the secretary of labor's instruction to universities and colleges to increase their minority representation. In 1978, the year of Regents of the University of California v. Bakke, she's finishing up at Yale Law and being asked whether she got into both Princeton and Yale just because she was Puerto Rican ... So pivotal points in her own life [alinged with] pivotal points in the trajectory of Latinos in America.

But then I realized how much she had been an agent for herself from her earliest days of getting on the bench. Democratic Sen. Daniel Patrick Moynihan had been the one who brought her to the attention of then-President George H.W. Bush, and she had been very actively following that nomination process in the early '90s, then had been very active in helping to win a floor vote for her elevation to the Second Circuit Court of Appeals in 1998. I liked tracking her as a political figure as well as a person who represented this ethnic milestone [in the history of the Court].

As she's presented in the book, she's a pretty complicated and interesting person, someone who could be both ambitious and strategic on the one hand while showing vulnerability and humanity on the other. How did she balance those aspects of her personality during her rise? Did she kind of keep her head down the whole time or was she more aggressive than that?

That's a great phrase — "keep her head down" — because I use that to characterize her early childhood life. She did keep her head down. She was a dutiful daughter going through Catholic school for elementary and high school. But she learned to work the channels [of power].

She didn't disrupt situations as a young person or even in college; I compare her to students at Stanford who walked out when they didn't like the graduation speaker (who happened to be Daniel Patrick Moynihan). She worked through channels, she wrote letters, she understood the system. So what she did is she learned how to be very assertive on her own behalf and very assertive on behalf of other Latinas and minorities who she was with in school or the workplace.

And it was a careful balance. She came along at a time when, fortunately for her, the nation was readier for more of a Hispanic presence, and she took advantage of that. She stands up and boldly says, "I was the perfect affirmative-action baby" — quite in contrast to Clarence Thomas, her colleague on the Supreme Court who feels that affirmative-action has stigmatized many people.

In terms of how she dealt with people, she's a generation behind justices Ginsberg and O'Connor, and she didn't have to be as cautious with the way she presented herself [as they did]. First, she's a woman from the Bronx; she's got more Scalia in her than she might want to acknowledge. She's used to mixing things up ... The Court is a very tradition-bound environment where most justices come from different backgrounds than the one Justice Sotomayor came from. They came from backgrounds of privilege; and I think she's probably the first justice from a housing project.

They have a lot of respect for her work ethic and her life story, but she can also be, from the bench, very abrupt and exasperating. And at the human level, these differences can be significant.

On that human level — and with the caveat that the Court is a pretty secretive institution and that we often don't know what's going on behind the scenes — is it the case that the tensions on the Court align with ideological differences, or do they transcend politics?

On the law, the liberals certainly tend to be together. When you think of cases like the Shelby County voting rights case — or you can take the more recent Hobby Lobby case — she is with her liberal colleagues, led by the senior justice on the left, Ruth Bader Ginsberg. She tends to be pretty strongly ideologically defined as a liberal, more so than the earlier Clinton appointee, Stephen Breyer, for example.

I want to stress that when the justices are experiencing scrutiny from the outside, they close ranks. If I were to say, in a public way, "Oh, c'mon, do you really like working with this justice or that justice?" they would stick up for each other. But the truth is that she rattles the institution in various ways, and it's a buttoned-down group of people, so some of them think that she's calling too much attention to herself with some of her activities off the bench. Others are more admiring of [that trait of hers]; it's a very human institution at the same time that it's at the apex of the federal judiciary and studying the law of the land.

You break some pretty interesting news in this book about an affirmative-action case that, your sources tell you — and you emphasize in the book that Justice Sotomayor was not one of your sources — ended up differently than it originally was going to, largely because of a draft of a dissent she wrote and shared led some of the conservatives on the Court to dial back their ambitions.

She wrote something that probably only she could have written because it talked about ... the slights one feels when judged based on skin color. (Echoes of that dissent were found in [her dissent] in an affirmative-action case that followed a year later, where she wrote, "Race matters because of the slights, the snickers, the silent judgments that reinforce that most crippling of thoughts: 'I do not belong here.'")

As she was writing this dissent, which never saw the light of day, she was using that kind of fiery language, from what I've been told. (I haven't seen the documents but that's what I've been told.) And I think that was a statement that was very unique to her. I think that because of her general interest in operating in a very lawyerly, judicial way behind the scenes, she's not going to challenge the justices in their conferences and on cases as a matter of course that way. She's probably picking her shots, and this was a shot that she felt was important to pick.

And she made a difference. It turned out, from what I was told by a majority of the justices, that the conservative majority retreated and decided to send the case back to the Fifth Circuit Court of Appeals under a clarified standard, but not to reject the University of Texas's affirmative-action program and not to write an opinion that would undercut where the justices had been in 2003, with the Grutter v. Bollinger opinion.

Do you think that episode is sort of representative of the role she wants to play on the Court? Does she want to be the kind of justice that writes strong dissents that are seen as sort of historical markers? Or is it too hard to say since it's so dependent on the ideological balance of the Court?

I think at this point, one of her overriding priorities is fairer procedures for criminal defendants. I think her attitude reflects the knowledge learned in a big city prosecutor's office, when she worked in Manhattan, and her years presiding over trials, as well as her more personal experience of being a Latina.

Just think of where she's broken away from the majority — and also her liberal colleagues. She has distinguished herself with impassioned statements when fellow justices have refused to take up defendants' appeals. Individual justices rarely go public with their concerns about a case the Court decided not to hear ... but she has done that several times, and she did it very early on.