"The Overnighters": The haunting true story of a 21st-century boomtown

A lone pastor takes on a North Dakota town transformed by fracking in a modern-day, real-life Steinbeck yarn 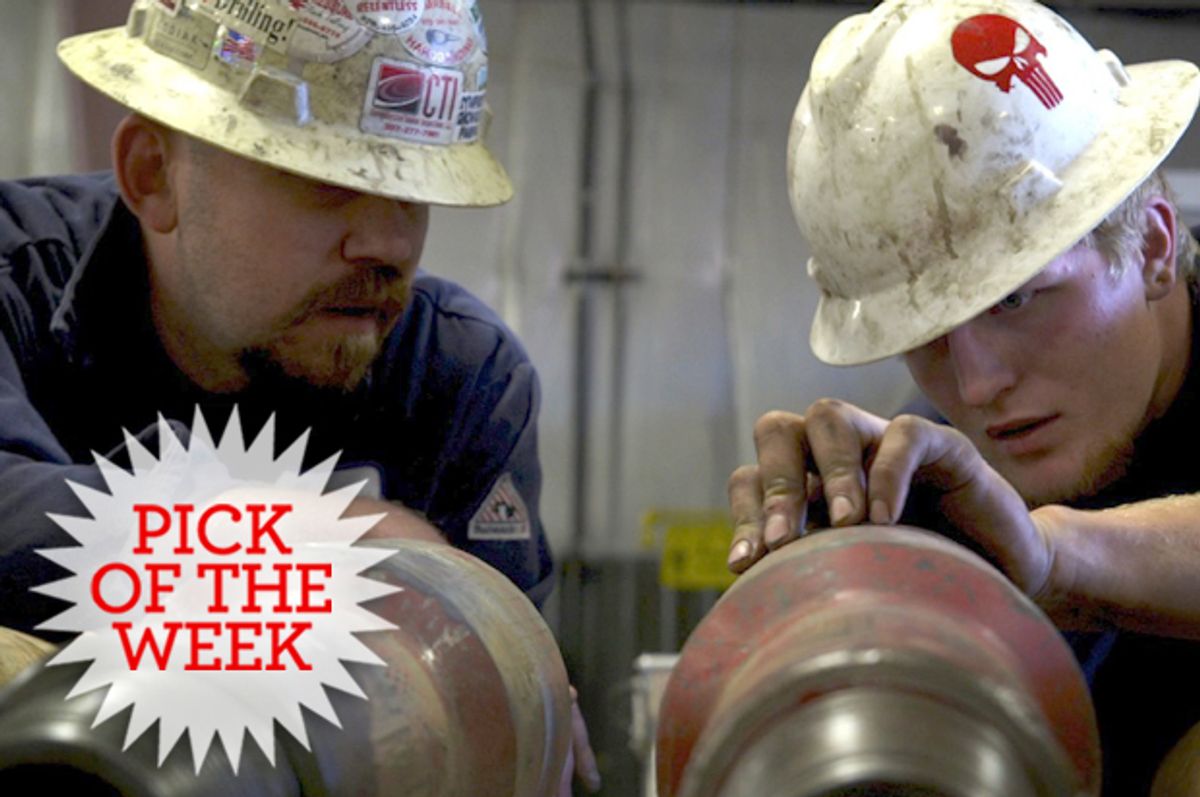 If John Steinbeck were writing in the second decade of the 21st century, “The Overnighters” is precisely the story he’d want to tell. It’s the tale of a small-town preacher whose faith leads him to defy his community and his own congregation, set against an oil boom and a devastating nationwide recession. As the layers of “The Overnighters” keep peeling away, it becomes a more intimate story than one about a self-sacrificing hero who is driven to walk the path of righteousness, and to stand with the outcasts against the respectable hypocrites of society. By the time we reach the end of Pastor Jay Reinke’s story (told almost entirely in vérité fashion, without narration or interruption), we are left to wonder where the real hypocrisy lies, and where we can find righteousness in an age of brutal social and economic change.

In fact, we don’t reach the end of Reinke’s story in this film, or anyone else’s, because for all its novelistic qualities “The Overnighters” is a documentary about real people in a real place. This is both amazing and frustrating. It’s amazing because filmmaker Jesse Moss spins a gripping saga that seems to capture the American zeitgeist in uncanny fashion, and it’s all true. And it’s frustrating because we yearn for a satisfying denouement – whether for Reinke and his family, or the convicted sex offender from Los Angeles who’s sleeping in their den, or for the dozens of other migrant workers who crash for days or weeks at a time in the Lutheran church where Reinke is pastor – and no such satisfaction is forthcoming. As Reinke observes at one point, that’s the nature of his ministry, and the nature of Williston, North Dakota, his transformed town: He forms intense connections with people, for a short time, and then they’re gone.

Until a few years ago, Williston was about as close as you could get to the back of beyond in the continental United States: an isolated city of 12,000 or so people on the arid prairies of northwestern North Dakota. Nearly half the residents were of Norwegian ancestry; the temperature falls below 0 degrees Fahrenheit more than 40 days a year. With the coming of fracking, and the discovery of immense underground oil deposits along the Bakken formation, everything changed but the weather. Williston is now a modern-day Deadwood or Virginia City, with higher average rents than New York or San Francisco. It’s easy to find work, and six-figure salaries are not unusual, but it’s almost impossible to find housing. There are an estimated 30,000 residents crammed into trailer parks and temporary housing, renting out sofas by the shift or sleeping in their cars. (That’s legal, if you can get permission to park overnight on private property.)

Men come to Williston from all kinds of places, far and near – almost all of the migrants we see in "The Overnighters" are male – but the majority are white working-class Americans who couldn’t earn a living wage wherever they came from. Without much consultation with his congregants, Reinke set up the Concordia Lutheran Church as Williston’s impromptu welcome center for newcomers, especially the ones that even a boomtown is hesitant to embrace. His flock is the guys who arrive on one-way Greyhound tickets with no particular job skills, and quite possibly a criminal record and a substance-abuse problem. He refers them to counselors and employers, slips them a few bucks for clothes and a haircut, lets them bunk on the church floor or park their pickup in the lot and, fairly often, steers them gently back out of town again when they discover that the streets of Williston are not paved with gold. Finding gainful employment in Williston is one thing; having to live in what one disillusioned Wisconsinite describes as a “shitty-ass place” is quite another.

Moss is too busy with the human stories of Pastor Reinke and his colorful rotating cast of visitors to pay much attention to the other story of western North Dakota, which is that the oil boom is predicated on the near-total destruction of the surrounding prairie, a severe but spectacular environment. We can certainly draw analogies: The same economic forces that have disrupted the lives of all these adult men, most of whom have wives and children somewhere else, are also driving the search for more and more oil, at whatever short- and long-term cost to the planet. But as it moves along, “The Overnighters” becomes more tightly focused on Reinke and his struggles, first with a town that feels traumatized, invaded and increasingly intolerant of outsiders, then with a number of individual newcomers he draws into his orbit and then pushes away, and finally with himself.

One could draw numerous lessons from this moving and almost operatic documentary, but as Reinke himself might tell you, if the Bible teaches us anything of value, it teaches us that there is no sin greater than pride. The more time we spend with Jay Reinke, the less we understand him. At first he’s almost a caricature of a relentlessly sunny Great Plains preacher-man from a low-impact mainline denomination, singing hymns as he wakes dozens of overnighters camped throughout the church or listening, with unflappable compassion, to the fragmented outpourings of newcomers. One man from Arizona, who is evidently tweaked out of his mind and looks as if he hasn’t slept for days, delivers an extended monologue about how he absorbed demons from having sex with his meth-crazed ex-girlfriend. Reinke nods along, wearing a pained and loving smile, and then says, “Can I tell you something? You and I are a lot more alike than we are different.”

That guy soon gets back on the bus for Phoenix, but that moment stuck with me for lots of reasons, including the fact that Reinke isn’t actually kidding. Some viewers will pick up on his personal turmoil pretty early, including the flashes of anger and recrimination and the fact that he spends more time on his Overnighters program than he does with his immeasurably wholesome and well-adjusted wife and family (although they remain generally supportive). There is no reason to doubt that Reinke felt called by his idea of Christian service to lend aid to the scruffiest and most disreputable of Williston’s new arrivals, and to understand the town’s transformation (as he tells a city council meeting) both as a gift and a burden. That he touched many people’s lives, and eased a traumatic transition, seems inarguable. But Reinke also openly questions his own motives, and makes clear that there’s a difference between the saintly public persona and the private man. Ultimately the tsunami-force waves that scattered all those lost and broken men on the Dakota prairie strip away all such fictions and leave no one standing.