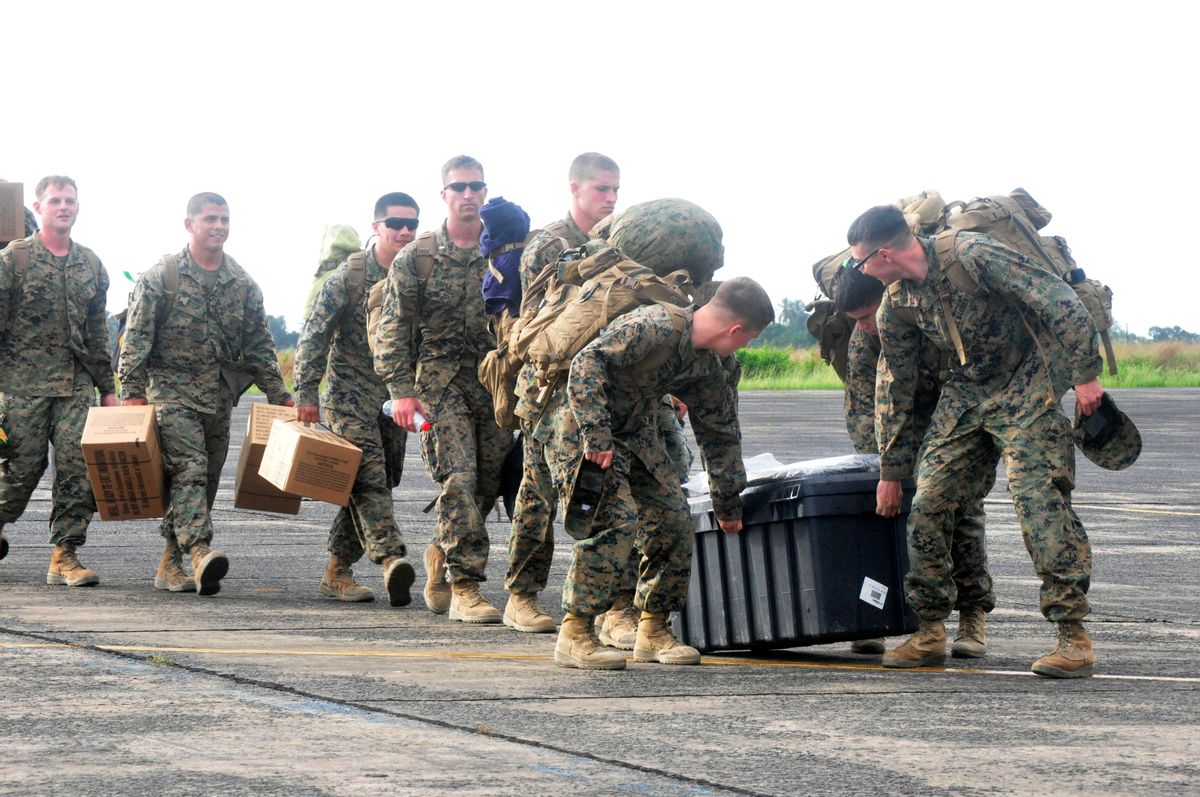 U.S marines arrival at the Roberts International airport in Monrovia, Liberia, Thursday, Oct. 9, 2014. Six U.S. military planes arrived Thursday at the epicenter of the Ebola crisis, carrying more aid and American Marines into Liberia, the country hardest hit by the deadly disease that has devastated West Africa and stirred anxiety across a fearful world. At a World Bank meeting in Washington, the presidents of several West African countries struggling with Ebola pleaded for help, with one calling the epidemic "a tragedy unforeseen in modern times." (AP Photo/Abbas Dulleh) (AP)
--

As regional leaders plead for the world's help in dealing with the Ebola outbreak, more American Marines arrived in Liberia with supplies.

The U.S.-led coalition intensified its aerial bombardment in the Syrian border town of Kobani as the extremist group fought street battles with Kurdish forces.

3. FRUSTRATION TURNS TO ELATION FOR GAY COUPLES IN NEVADA

Same-sex couples can now exchange their vows in the self-proclaimed marriage capital of the world — ending a dizzying legal fight that kept them waiting for days.

As Islamic State militants continue their assault, Turkey says it won't join the fight unless the U.S.-led coalition also attacks the Syrian government.

5. WHY CUBANS ARE FLOCKING TO AMERICA

Emigration has risen dramatically since the island lifted travel restrictions last year, with most new arrivals passing through Mexico or flying straight to the U.S.

6. OBAMA IS ALL IN WITH HIS ECONOMIC PITCH

In a campaign strategy fraught with risk, the White House is betting that Obama's tight embrace of the economic recovery will galvanize his core supporters.

Police say Vonderrit D. Myers was shot after he opened fire on a white, off-duty officer, but Myers' parents say he was unarmed.

The stock market had its worst day of the year Thursday, just 24 hours after recording its best.

A surprising patch of the potent global-warming gas hovers over part of the southwestern U.S., hinting that the EPA has underestimated leaks of natural gas.

They help give Coke its distinctive bite and Doritos its cheesy kick. But the artificial and natural flavors used to rev up the taste of processed foods remain a mystery to most Americans.