Leave brunch alone! Why the media loves to hate on the mid-morning meal 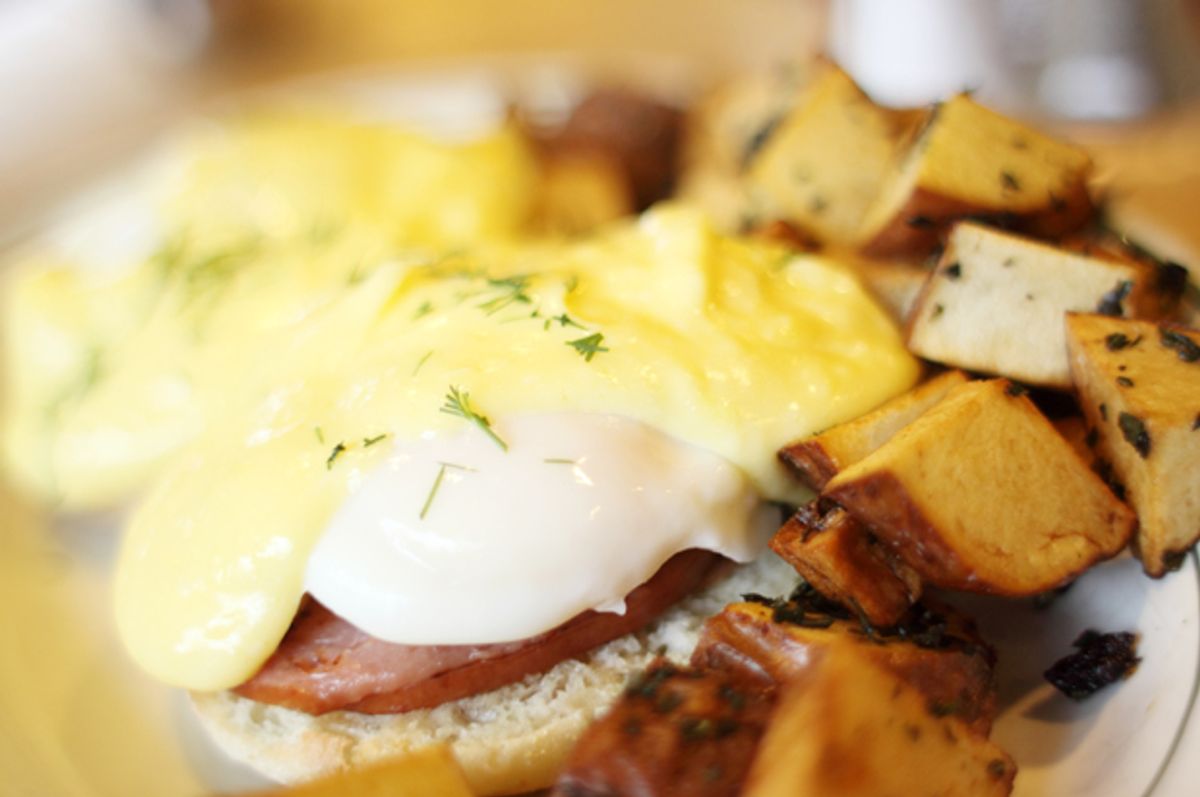 Ever a few beats behind the zeitgeist, the New York Times this week has weighed in on brunch – and taken the controversial stance against it. Was ever there a meal that inspired such furious takedowns?

Writing in the Opinion pages, David Shaftel describes "a percolating brunch backlash," set off in part by the Strokes' Julian Casablancas' recent pronouncement that "I don’t know how many, like, white people having brunch I can deal with on a Saturday afternoon." And he cites author Shawn Micallef, who this summer devoted a whole book to "The Trouble with Brunch. Shaftel himself is only a recent convert to the anti-brunch philosophy, reminiscing fondly over a "hedonistic all-day affair in Dubai, where I topped off courses of Japanese, Chinese and Lebanese food with a full English roast beef dinner, all consumed while hovering above the desert in an air-conditioned five-star hotel restaurant and guzzling a jeroboam of Veuve Clicquot," a sentence that made me a) wonder how one eats while hovering and b) Google the word "jeroboam." Now, however, he rails against "malevolent" forces such as hollandaise as "a twice-weekly symbol of our culture’s increasing desire to reject adulthood."

On the subject of brunch, I happen to maintain a Switzerland-like neutral stance. On the one hand, I always wake up early and ravenous, so waiting until 11 to eat is virtually impossible. On the other hand, I like bacon and drinking before noon, so that. But the idea that brunch was ever anything but what Shaftel calls "conspicuous consumption disguised as urbanity" is absurd. Brunch was already a punchline about yuppie excess back in the eighties. In 1990, Marge Simpson was nearly seduced by a bowling instructor who opened her eyes to the meal that's "not quite breakfast, it's not quite lunch, but it comes with a slice of cantaloupe at the end." The movie "LA Story" skewered caffeinated brunch culture over two decades ago. "How I Met Your Mother" did an entire farcical brunch episode eight years ago, and in 2012, "Portlandia" put the nail in its coffin in a brunch-themed episode straight out of Samuel Beckett. When a character in a movie or TV show says the word "brunch," it is generally taken as a signal that this is a scene of pretentious, possible jeroboam of champagne swilling clueless excess.

So does brunch really need a takedown? You mean the meal that Gawker said "sucks" four years ago --  and Washington City Paper used the same word for two years earlier, saying "It's phony, it's stupid, it sucks"? Oh, right, brunch, the thing the Village Voice also said "sucks" three years ago, and Anthony Bourdain called "a dumping ground for the odd bits left over from Friday and Saturday night" fourteen years ago in "Kitchen Confidential." The only meal that is the first word of a common refrain that ends "… is for a__holes," the meal whose crimes of course Buzzfeed has listicled. Brunch: It's like watching porn. We've all done it, but nobody likes to admit to enjoying it.

The animosity toward brunch may have something to do with its "white people with nothing better to do on a weekend" image. Or maybe it's the notion of trying to hack the time-honored three meals a day system, or the way brunch always leaves more questions than it answers -- should I eat a little something beforehand? Have I now ruined my dinner? Or it may just be a general squeamishness around hollandaise sauce. Seriously – it comes up a whole lot in the diatribes against it. Whatever it is, hating on brunch is nothing new. It's a reliable and easy target, the mimes of meals. So is it suddenly facing a backlash? That would imply it would ever have been cool. And in the pantheon of meals, the cheese grits always stands alone.