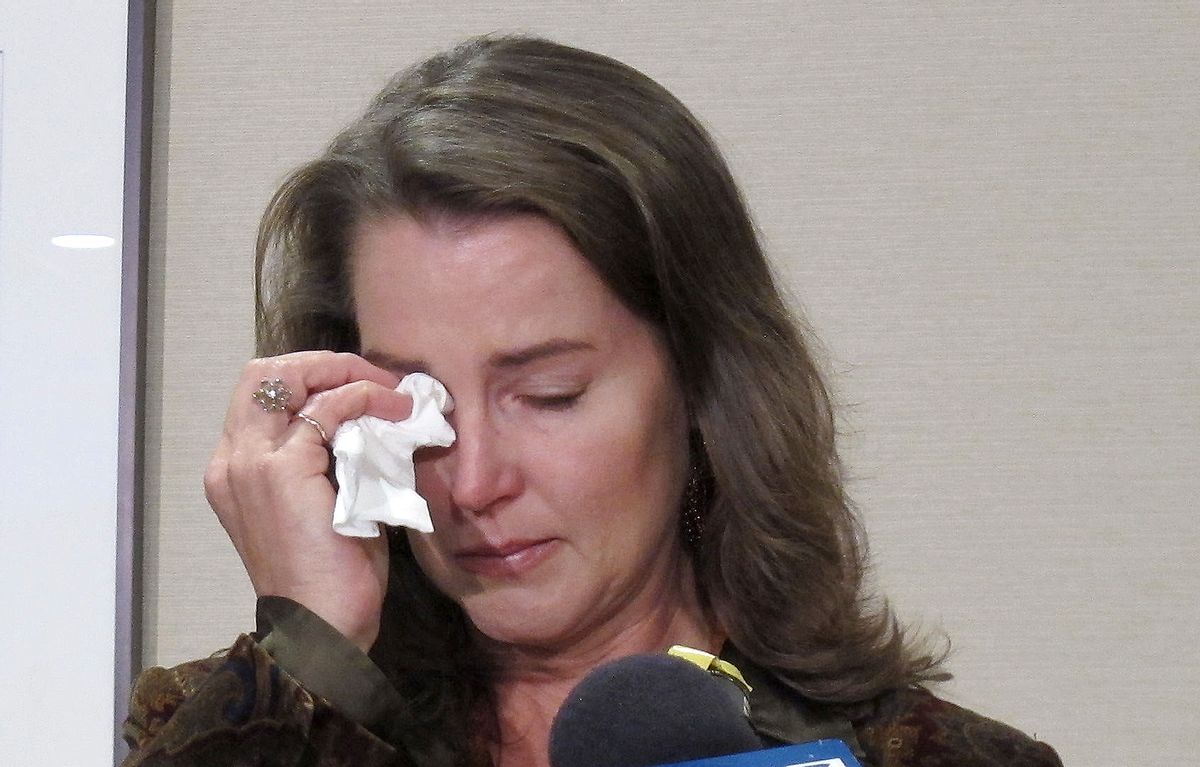 Cylvia Hayes, fiancee of Oregon Gov. John Kitzhaber, cries as she speaks at a news conference in Portland, Ore. on Thursday, Oct. 9, 2014. Hayes has admitted that she violated the law when she married an immigrant seeking to retain residency in the United States. She said she was "associating with the wrong people" while struggling to put herself through college and regrets her actions. (AP Photo/Gosia Wozniacka) (AP)
--

PORTLAND, Ore. (AP) — Oregon Gov. John Kitzhaber is considered the front-runner in next month's election, but his fiancee's stunning admission that she was paid to illegally marry an immigrant in 1997 — plus other allegations about her — have suddenly complicated the race.

Wiping away tears at a Thursday news conference, 47-year-old Cylvia Hayes said she accepted around $5,000 to marry the immigrant so that he could remain in the United States.

"It was a marriage of convenience," Hayes said. "He needed help and I needed financial support."

Ashamed and embarrassed, Hayes said she had kept the marriage secret from Kitzhaber until a Portland alternative newspaper, Willamette Week, began asking questions.

The Democratic governor has not publicly addressed his fiancee's secret marriage, but the issue could come up when he debates Republican state Rep. Dennis Richardson on Friday.

Hayes said she was "associating with the wrong people" while struggling to put herself through college when she agreed to the sham marriage. Hayes was twice divorced and just shy of her 30th birthday when she married an 18-year-old Ethiopian man.

"It was wrong then and it is wrong now and I am here today to accept the consequences, some of which will be life-changing," Hayes said.

Hayes said she was "ashamed and embarrassed," and did not tell the governor about the marriage until a reporter from the Willamette Week newspaper began asking questions this week. She appeared alone before a podium in a downtown Portland office building, saying she asked Kitzhaber not to join her because she can't look at him without crying.

When she told Kitzhaber about the marriage, "he was stunned and he was hurt," Hayes said, pausing to fight tears. "And I will be eternally grateful for the beautiful, loving way he has supported me in this."

Hayes apologized to Kitzhaber, her friends and family, and to Oregonians, saying she deeply regrets not being upfront about "a serious mistake." The couple confirmed in August that they're engaged.

Hayes said they never lived together, met only a handful of times and have not had any contact since the divorce was finalized in 2002.

Hayes, 47, has openly discussed her hardscrabble childhood in Washington state and her struggle to support herself financially since high school.

Kitzhaber met Hayes when she ran unsuccessfully for the state Legislature in 2002. Kitzhaber, who was governor from 1995 until 2003, divorced his second wife, Sharon, shortly after leaving office. Kitzhaber made a political comeback in 2010.

Though they have yet to marry, Kitzhaber refers to Hayes as the "first lady," and she has embraced the role of political spouse while continuing her work as an energy consultant. She has been active in developing Kitzhaber's energy and environmental policy. A story in Willamette Week on Wednesday said that Hayes has used her title as first lady and her role in advising the governor to advance her private consulting business.

Hayes said she'll step back from her work advising Kitzhaber for now.

Richardson, trying to gain traction before voters begin casting ballots next week in Oregon's all-mail election, has tried to shift attention to another story about Hayes. A Willamette Week story on Wednesday said she used her positon as first lady to advance her consulting business.

"It's clear from her past history that the first lady has had no qualms with breaking the law in order to make financial gains," said Meredith Glacken, a spokeswoman for Richardson.

Hayes said she's been cautious in trying to avoid conflicts of interest between her business and first lady work.

"The kind of issues that I work on, we've been working on these things together the entire 10 years we've been together," Hayes said.