This is your brain on money: Why America's rich think differently than the rest of us

Nobody's perfect. But only the rich get away with thinking that their luck and their flaws are actually strengths 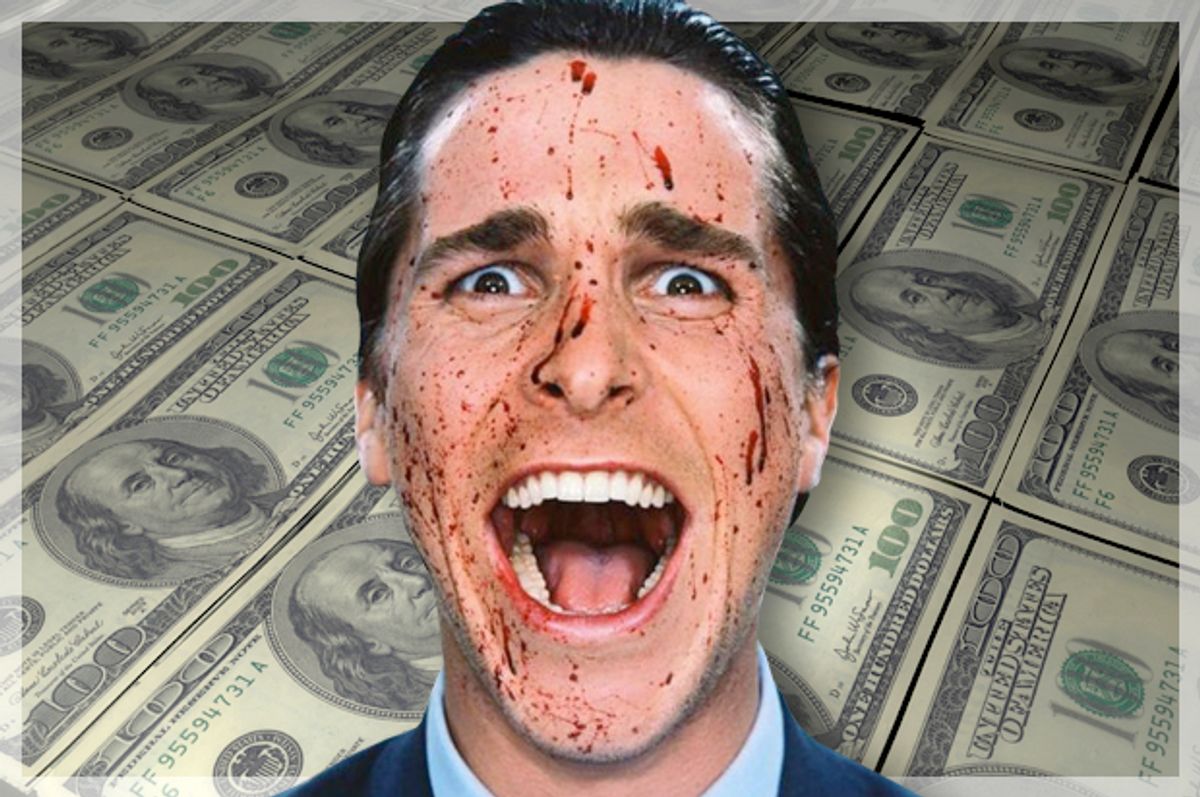 The Internet is replete with apologias for the rich. They are thinly sourced and even less well thought. The goal is simple: to justify the unjustifiable chasm between the rich and poor, globally and within our nation. But the irony is that, rather than being better than the rest of us, in many ways the rich are worse.

Paul Piff and his co-authors, who have done extended research on the behaviors of the wealthy, find that lower class individuals are more generous, charitable, trusting and helpful than upper class individuals. In another study, they find individuals with expensive cars were more likely to cut off other drivers and pedestrians. Further, in laboratory experiments, wealthy participants were more likely to take valued goods, cheat, lie and endorse such behavior. These studies have support from other sources. For instance, the wealthy actually donate less to charity as a share of their income than the middle class. Their giving is more dependent on the economic climate than the middle class. It is unsurprising that Christ warned, “it is easier for a camel to go through the eye of a needle than for a rich person to enter the kingdom of God.”

The rich tend to behave badly, but their bad behaviors are often socially accepted; a behavior that would be seen as inappropriate by a poor person is seen as a minor offense by the rich. (See: casual drug use.) The reason is simple: in a society that worships wealth, those with wealth are worshipped as well. A young economist wrote in 1844,

Economist Chris Dillow cites research by Cameron Anderson and Sebastien Brion, showing that overconfident individuals are seen by others as more competent. He argues that, “overconfident people are more likely to be promoted. And this could have positive feedback effects. Higher status will itself breed even more overconfidence. (E.g. “I got the job so I must be good.”) And if bosses employ like-minded subordinates, the result could be entire layers of management which are both over-confident and engaged in groupthink.”

This effect is reinforced further by the “just-world” bias, which leads us to believe that the rich and powerful deserve their positions. In a famous study, Melvin Lerner found that when students were informed that another student had randomly won a prize, they attributed positive characteristics to the student who had won. Studies have also shown that people attribute negative characteristics to victims -- from Kent State students shot by the National Guard, to young black men shot by police, to low-wage workers.

A more recent study by Justus Heuer, Christoph Merkle and Martin Weber finds rather the same thing: Investors are fooled into believing risk-taking is based in skill, rather than chance. Like the students in the experiment, investors believe managers who are simply reaping returns from risky bets are, in fact, oracles. Another study by Arvid Hoffmann and Thomas Post finds that “the higher the returns in a previous period are, the more investors agree with a statement claiming that their recent performance accurately reflects their investment skills (and vice versa).” Research by Charles O’Reilly and others finds that narcissistic CEOs are better paid than other CEOs. Another study finds that employees that spend more time grooming make more than workers who do not. (The effect is particularly strong for men of color.) All of this should leave us skeptical of the idea, promoted by many free-market fundamentalists, that compensation is set by objective market factors. As Christopher Lasch notes, “Nothing succeeds like the appearance of success.”

Many defenders of the rich argue that the rich are special and therefore merit special treatment. (Charles Murray has gone as far as to argue that the rich should preach their virtues to the poor.) Americans overwhelmingly believe that the wealthy have individually earned their place in society. But this is unlikely. Numerous studies find that financiers are vastly overpaid, and hedge fund managers, even the best, rarely beat the market. CEOs are also vastly overpaid, and largely benefit from a shift in tax policy that allows rent-seeking to flourish.

A famous economist once wrote,

"This disposition to admire, and almost to worship, the rich and the powerful, and to despise, or, at least, to neglect persons of poor and mean condition, though necessary both to establish and to maintain the distinction of ranks and the order of society, is, at the same time, the great and most universal cause of the corruption of our moral sentiments."

The economist was not Marx, but Adam Smith.

In "The Son Also Rises," Gregory Clark finds that wealth can persist for 10 or more generations. But biases, like the self-serving bias and optimism bias, lead the wealthy to attribute to themselves what is actually caused by factors beyond their control. Lucky people are seen as skillful, and are constantly worshiped for their success. Eventually they begin to believe what others say, leading to a narcissistic personality -- or as Paul Piff says, “characteristics we would stereotypically associate with, say, assholes.”

There’s an apocryphal story in which F. Scott Fitzgerald says, “The rich are different from you and me,” and Ernest Hemingway retorts,“Yes, they have more money." In his story, "Rich Boy," Fitzgerald writes of the wealthy: “They think, deep in their hearts, that they are better than we are because we had to discover the compensations and refuges of life for ourselves. Even when they enter deep into our world or sink below us, they still think that they are better than we are. They are different."

All humans all delusional. It is only the rich who have that delusion fostered. All humans are, to some extent, assholes. But only rich people can get away with it.