We must stop praying to our iPhones: Dissent and critical thinking in the Internet era

Don DeLillo and Thomas Pynchon have it right: Apple, Amazon and other tech companies really want everyone the same 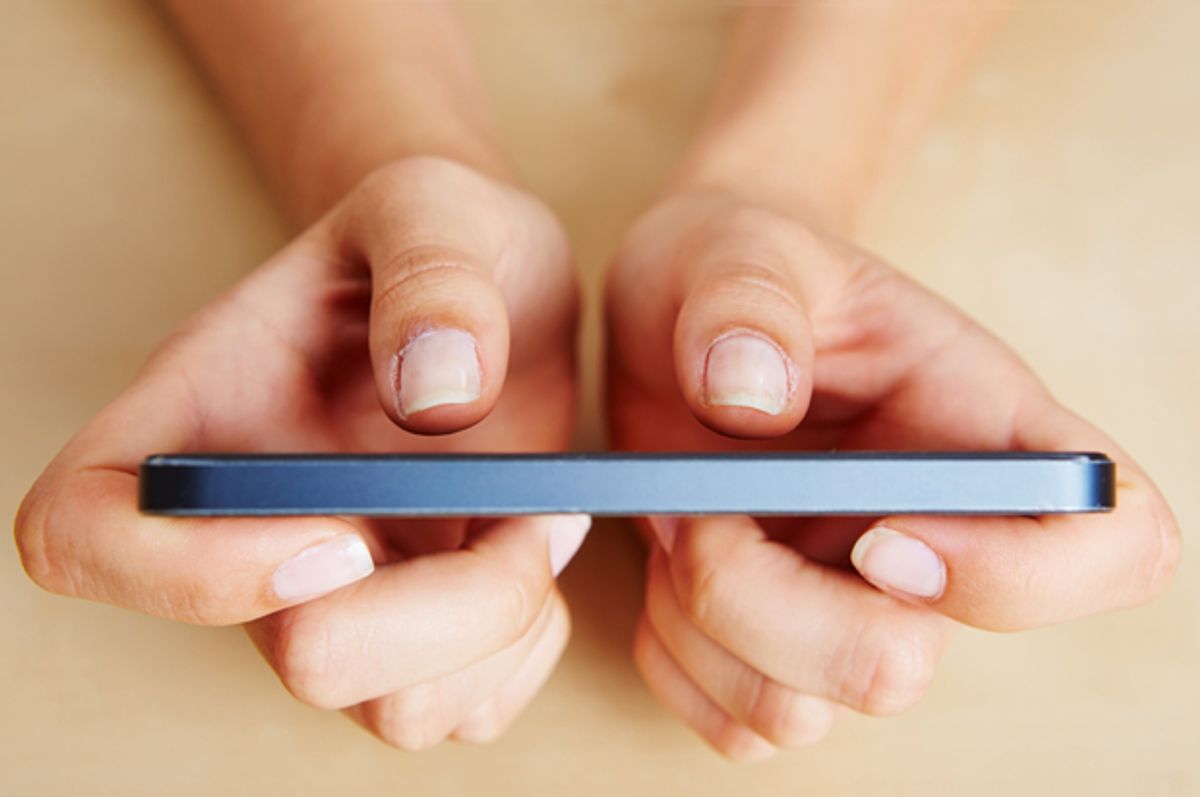 Every fall professors across the country hand out course syllabi. These little documents outline things like the class schedule, learning outcomes, perhaps a grading rubric. Many also feature a list of proscriptions—no eating in class; no passing notes; you in front, don’t sit next to your girlfriend. Some instructors don’t allow pajamas in their classrooms, or exercise attire.

These interdictions are often playful—if you wear the same thing to class that you wear to a party, I’ll think you take both activities with about the same degree of seriousness—and they can help to provide students with a sense of their professor’s personality.

But rules can also be off-putting. Some students feel alienated by so many regulations. In the English and creative writing classes I teach, too many directives can end up reinforcing the kinds of power inequities most of us eschew in favor of a more democratic climate, one in which students feel encouraged to challenge norms, question assumptions, debate beliefs and not just do as they’re told.

So I’ve abandoned most of my old edicts. Gone are the rules about pajamas, sweatpants, food and drink. But one remains, and I follow it without compromise: This is a technology-free classroom.

I understand the utility of computers, tablets, e-books, and smart phones in certain applications. It’s never been easier (or greener) to administer assignments or circulate photocopies and other course materials. But the study of literature is based on human interaction; digital technologies risk undermining the very principles from which this fruitful endeavor derives.

I’m not just speaking about face-to-face discussion, but also about the discourse that takes place between readers and writers—what Vladimir Nabokov imagined as the reader and author meeting to shake hands at the top of a great summit—and between the culture we live in today and the cultures that Shakespeare, Chekhov and Tolstoy allow us to glimpse in their pages.

As Mark Edmundson has written: “Real reading is reincarnation […]. It is being born again into a higher form of consciousness than we ourselves possess. When we walk the streets of Manhattan with Walt Whitman or contemplate our hopes for eternity with Emily Dickinson, we are reborn into more ample and generous minds.”

Is such a relationship afforded by electronic texts? Does poetry, regardless of the device on which the words appear, still inspire in us what the critic Robert Scholes described as “reflections that can be assimilated to our own situations”?

Tech advocates might begin by pointing out the basic ease and efficiency of e-readers, tablets, and smart phones. These devices offer a greener, more sustainable, less wasteful, and more portable platform for reading than conventional books. And what’s the difference, as long as the words on the screen remain the same?

To which I could only issue a few very minor complaints: pagination often differs from one device to the next; citations can be harder to notate; LED displays beaming up from desktops are distracting in the classroom; batteries run out of juice. But do these inconveniences justify the plunder of natural resources, or the expenses that go into printing a book? Probably not.

You might also suggest that if there’s any future at all to literature, then it’s to be found in the technologies that help it adapt to the digital age. Those of us opposed to e-books are just swimming against the tide, you might say, and the cultural undertow will inevitably carry us down the shore, whether we like it or not.

At which point I would have to admit that certain Internet technologies have already proven beneficial to the welfare of both writers and readers. Twitter, for example, has happily become the preferred medium for authors promoting new books, championing their friends’ essays, and announcing upcoming readings. I don’t know of anyone who would rather go all around the city anymore hanging posters, when they can just shout to everyone they know with the loudest bullhorn ever created.

Maybe you also want to remind me that the printing press was no less a technological advancement in its time than the e-reader is today, or that books were widely regarded as cultural corrosives among certain factions in Victorian England, and that novels were once feared and derided, as e-books sometimes are today. All of which is true.

But is everything we seek from great literature actually available in its digital incarnation, or does the tool itself make us act like tools, too—to misquote Marshall McLuhan? The novelist John Gardner described reading as an act of dreaming. “If the effect of the dream is to be powerful,” he wrote, “the dream must… be vivid and continuous.” A novel’s greatest mistake, he said, “is to allow or force the reader’s mind to be distracted, even momentarily, from the fictional dream.

Now imagine if a book were also a mailbox, movie theater, camera, shoe store, file cabinet, television, record player, bank machine, telephone, sports arena, atlas, datebook and shopping cart. We would find it impossible to believe a reader could avoid distraction. She would be awakened from the dream before she’d had a chance to fall asleep.

E-books also pose a threat to the most basic—but enduring—benefits of reading. Gardner said literature “helps us to know what we believe, reinforces those qualities that are most noble in us, leads us to feel uneasy about our faults and limitations.” And it does so not by propaganda, but by critique. As Edmundson has said, “For a student to be educated, she must face brilliant antagonists: She has to encounter thinkers who see the world in different terms than she does.”

The companies that produce e-readers and smart phones, however, don’t want us to “see the world in different terms.” They certainly don’t want us to “face… antagonists.” Instead, they want to reduce antagonism and suppress diversity in favor of homogeny. Evgeny Morozov describes one way this mission is accomplished, in "To Save Everything, Click Here": “Thanks to its Kindle e-reader,” he writes, “Amazon […] collects a wealth of information about individual readers as well as reading practices across entire demographics […]. Nothing,” he explains, “prevents Jeff Bezos from taking such knowledge and churning out books automatically.”

Of course, this is no surprise. Theodor Adorno and Max Horkheimer understood over 70 years ago that “the technology of the culture industry” amounts to “no more than the achievement of standardization.”

This trend toward “automation” and “standardization” is especially troubling, considering one of literature’s great benefits is refuge from commercial influence. We might not agree with Jane Austen’s assumptions about class, or Hemingway’s gender politics, but we never feel they’re trying to sell us something. And when we do find name brands and corporate jargon in a novel like Don DeLillo’s "White Noise," let’s say, they’re used to satirical ends. But what happens when would-be readers clamor to their devices just like the characters who run around that novel repeating “Toyota Celica” like spiritual mantras?

Literature has also enjoyed a long history of ambivalence toward new technology. From Mary Shelley to George Orwell, Thomas Pynchon to Gary Shteyngart, writers have used the novel as a platform for voicing fears about technology’s power to displace not only their profession, but the kinds of humanist ideals—freedom, autonomy, equality—that are so often found in the pages of great books. Where will we turn when the only medium for voicing those satirical correctives is the very thing being corrected?

A company like Apple is well aware of these concerns, and they aim to preempt them. “What will your verse be?” reads the new iPad slogan, as if to inspire in us the kinds of dreams and discoveries we’ve sought forever from literature. This is Apple offering us an opportunity to express ourselves, to find out “what we believe,” to give voice to our uneasiness “about our faults and limitations,” as it were. This is Apple giving us what we want.

But in asking this question, Apple is really betraying its true ambition: to displace literature, as we know it, with some kind of commoditized digital version. “What will your verse be,” they ask, implying, “once you buy the new iPad?” Read: let our five-hundred-dollar screen—and not your intellect, imagination, or education—be your muse.

There was once a hope among certain liberal thinkers that technology could free art from the cloisters of commerce and privilege. In “The Work of Art in the Age of Its Mechanical Reproducibility,” Walter Benjamin famously celebrated film’s potential to “[emancipate] the work of art from its parasitic subservience to ritual.” But the promise of a massive class critique in cinema never came true. Instead of more Charlie Chaplins, we wound up with seven iterations of "Police Academy."

The Internet promised a similar future—a global village, a connected world, a democratizing, empowering force for freedom. What we got instead were consumers lining up a week early for the new iPhone—a pilgrimage as ritualistic as one can imagine in late capitalist society, a cultic prayer before the altar of Apple, a worship of the very things Don DeLillo was satirizing (but which no one imagined as real) in "White Noise."

The battle, one fears, may be over already. So what’s left for those of us who believe education is still fundamentally about critical thinking, dissent and skepticism, and not about acquiescence, subservience, or blind faith? Can a device such as the iPad exist in the classroom without undermining those ideals? Can it ever be used to knock down the monolith from which it was hewn? Can it inspire individualism and emancipation from ritual? Can we ever “walk the streets of Manhattan with Walt Whitman” as his words beam up at us from an iPhone, or “contemplate our hopes for eternity with Emily Dickinson” on the Kindle?

I honestly don’t know. But one of the things literature teaches us is to take nothing at face value, and to keep asking questions. So it seems an important exercise at least to ask whether we wish to pray to Apple or Austen, Amazon or Auden, Google or Graham Greene–and whether or not we can do both without dividing our attention.