Google makes us all dumber: The neuroscience of search engines 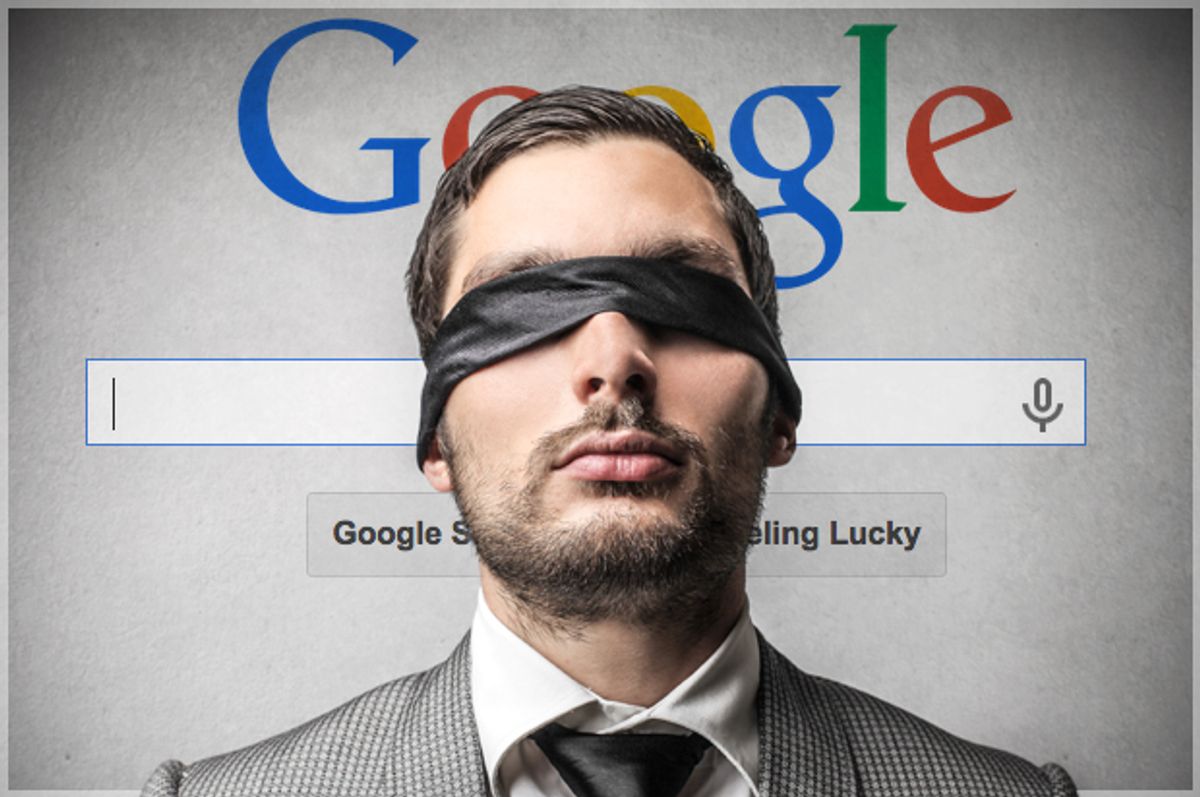 In 1964, Pablo Picasso was asked by an interviewer about the new electronic calculating machines, soon to become known as computers. He replied, “But they are useless. They can only give you answers.”

We live in the age of answers. The ancient library at Alexandria was believed to hold the world’s entire store of knowledge. Today, there is enough information in the world for every person alive to be given three times as much as was held in Alexandria’s entire collection —and nearly all of it is available to anyone with an internet connection.

This library accompanies us everywhere, and Google, chief librarian, fields our inquiries with stunning efficiency. Dinner table disputes are resolved by smartphone; undergraduates stitch together a patchwork of Wikipedia entries into an essay. In a remarkably short period of time, we have become habituated to an endless supply of easy answers. You might even say dependent.

Google is known as a search engine, yet there is barely any searching involved anymore. The gap between a question crystallizing in your mind and an answer appearing at the top of your screen is shrinking all the time. As a consequence, our ability to ask questions is atrophying. Google’s head of search, Amit Singhal, asked if people are getting better at articulating their search queries, sighed and said: "The more accurate the machine gets, the lazier the questions become."

Google’s strategy for dealing with our slapdash questioning is to make the question superfluous. Singhal is focused on eliminating “every possible friction point between [users], their thoughts and the information they want to find.” Larry Page has talked of a day when a Google search chip is implanted in people’s brains: “When you think about something you don’t really know much about, you will automatically get information.” One day, the gap between question and answer will disappear.

I believe we should strive to keep it open. That gap is where our curiosity lives. We undervalue it at our peril.

The Internet can make us feel omniscient. But it’s the feeling of not knowing which inspires the desire to learn. The psychologist George Loewenstein gave us the simplest and most powerful definition of curiosity, describing it as the response to an “information gap.” When you know just enough to know that you don’t know everything, you experience the itch to know more. Loewenstein pointed out that a person who knows the capitals of three out of 50 American states is likely to think of herself as knowing something (“I know three state capitals”). But a person who has learned the names of 47 state capitals is likely to think of herself as not knowing three state capitals, and thus more likely to make the effort to learn those other three.

That word “effort” is important. It’s hardly surprising that we love the ease and fluency of the modern web: our brains are designed to avoid anything that seems like hard work. The psychologists Susan Fiske and Shelley Taylor coined the term “cognitive miser” to describe the stinginess with which the brain allocates limited attention, and its in-built propensity to seek mental short-cuts. The easier it is for us to acquire information, however, the less likely it is to stick. Difficulty and frustration — the very friction that Google aims to eliminate — ensure that our brain integrates new information more securely. Robert Bjork, of the University of California, uses the phrase “desirable difficulties” to describe the counterintuitive notion that we learn better when the learning is hard. Bjork recommends, for instance, spacing teaching sessions further apart so that students have to make more effort to recall what they learned last time.

A great question should launch a journey of exploration. Instant answers can leave us idling at base camp. When a question is given time to incubate, it can take us to places we hadn’t planned to visit. Left unanswered, it acts like a searchlight ranging across the landscape of different possibilities, the very consideration of which makes our thinking deeper and broader. Searching for an answer in a printed book is inefficient, and takes longer than in its digital counterpart. But while flicking through those pages your eye may alight on information that you didn’t even know you wanted to know.

The gap between question and answer is where creativity thrives and scientific progress is made. When we celebrate our greatest thinkers, we usually focus on their ingenious answers. But the thinkers themselves tend to see it the other way around. “Looking back,” said Charles Darwin, “I think it was more difficult to see what the problems were than to solve them.” The writer Anton Chekhov declared, “The role of the artist is to ask questions, not answer them.” The very definition of a bad work of art is one that insists on telling its audience the answers, and a scientist who believes she has all the answers is not a scientist.

According to the great physicist James Clerk Maxwell, “thoroughly conscious ignorance is the prelude to every real advance in science.” Good questions induce this state of conscious ignorance, focusing our attention on what we don’t know. The neuroscientist Stuart Firestein teaches a course on ignorance at Columbia University, because, he says, “science produces ignorance at a faster rate than it produces knowledge.” Raising a toast to Einstein, George Bernard Shaw remarked, “Science is always wrong. It never solves a problem without creating ten more."

Humans are born consciously ignorant. Compared to other mammals, we are pushed out into the world prematurely, and stay dependent on elders for much longer. Endowed with so few answers at birth, children are driven to question everything. In 2007, Michelle Chouinard, a psychology professor at the University of California, analyzed recordings of four children interacting with their respective caregivers for two hours at a time, for a total of more than two hundred hours. She found that, on average, the children posed more than a hundred questions every hour.

Very small children use questions to elicit information — “What is this called?” But as they grow older, their questions become more probing. They start looking for explanations and insight, to ask “Why?” and “How?”. Extrapolating from Chouinard’s data, the Harvard professor Paul Harris estimates that between the ages of 3 and 5, children ask 40,000 such questions. The numbers are impressive, but what’s really amazing is the ability to ask such a question at all. Somehow, children instinctively know there is a vast amount they don't know, and they need to dig beneath the world of appearances.

In a 1984 study by British researchers Barbara Tizard and Martin Hughes, four-year-old girls were recorded talking to their mothers at home. When the researchers analyzed the tapes, they found that some children asked more “How” and “Why” questions than others, and engaged in longer passages of “intellectual search” — a series of linked questions, each following from the other. (In one such conversation, four-year-old Rosy engaged her mother in a long exchange about why the window cleaner was given money.) The more confident questioners weren’t necessarily the children who got more answers from their parents, but the ones who got more questions. Parents who threw questions back to their children — “I don’t know, what do you think?” — raised children who asked more questions of them. Questioning, it turn out, is contagious.

Childish curiosity only gets us so far, however. To ask good questions, it helps if you have built your own library of answers. It’s been proposed that the Internet relieves us of the onerous burden of memorizing information. Why cram our heads with facts, like the date of the French revolution, when they can be summoned up in a swipe and a couple of clicks? But knowledge doesn’t just fill the brain up; it makes it work better. To see what I mean, try memorizing the following string of fourteen digits in five seconds:

lucy in the sky with diamonds

This time, you barely needed a second. The contrast is so striking that it seems like a completely different problem, but fundamentally, it’s the same. The only difference is that one string of symbols triggers a set of associations with knowledge you have stored deep in your memory. Without thinking, you can group the letters into words, the words into a sentence you understand as grammatical — and the sentence is one you recognize as the title of a song by the Beatles. The knowledge you’ve gathered over years has made your brain’s central processing unit more powerful.

This tells us something about the idea we should outsource our memories to the web: it’s a short-cut to stupidity. The less we know, the worse we are at processing new information, and the slower we are to arrive at pertinent inquiry. You’re unlikely to ask a truly penetrating question about the presidency of Richard Nixon if you have just had to look up who he is. According to researchers who study innovation, the average age at which scientists and inventors make breakthroughs is increasing over time. As knowledge accumulates across generations, it takes longer for individuals to acquire it, and thus longer to be in a position to ask the questions which, in Susan Sontag’s phrase, “destroy the answers”.

My argument isn’t with technology, but the way we use it. It’s not that the Internet is making us stupid or incurious. Only we can do that. It’s that we will only realize the potential of technology and humans working together when each is focused on its strengths — and that means we need to consciously cultivate effortful curiosity. Smart machines are taking over more and more of the tasks assumed to be the preserve of humans. But no machine, however sophisticated, can yet be said to be curious. The technology visionary Kevin Kelly succinctly defines the appropriate division of labor: “Machines are for answers; humans are for questions.”

The practice of asking perceptive, informed, curious questions is a cultural habit we should inculcate at every level of society. In school, students are generally expected to answer questions rather than ask them. But educational researchers have found that students learn better when they’re gently directed towards the lacunae in their knowledge, allowing their questions bubble up through the gaps. Wikipedia and Google are best treated as starting points rather than destinations, and we should recognize that human interaction will always play a vital role in fueling the quest for knowledge. After all, Google never says, “I don’t know — what do you think?”

The Internet has the potential to be the greatest tool for intellectual exploration ever invented, but only if it is treated as a complement to our talent for inquiry rather than a replacement for it. In a world awash in ready-made answers, the ability to pose difficult, even unanswerable questions is more important than ever.

Picasso was half-right: computers are useless without truly curious humans.

Ian Leslie is the author of "Curious: The Desire To Know and Why Your Future Depends On It." He writes on psychology, trends and politics for The Economist, The Guardian, Slate and Granta. He lives in London. Follow him on Twitter at @mrianleslie.