Now that David Lynch's legendary series will be revived, a reflection on the real cultural legacy of the show 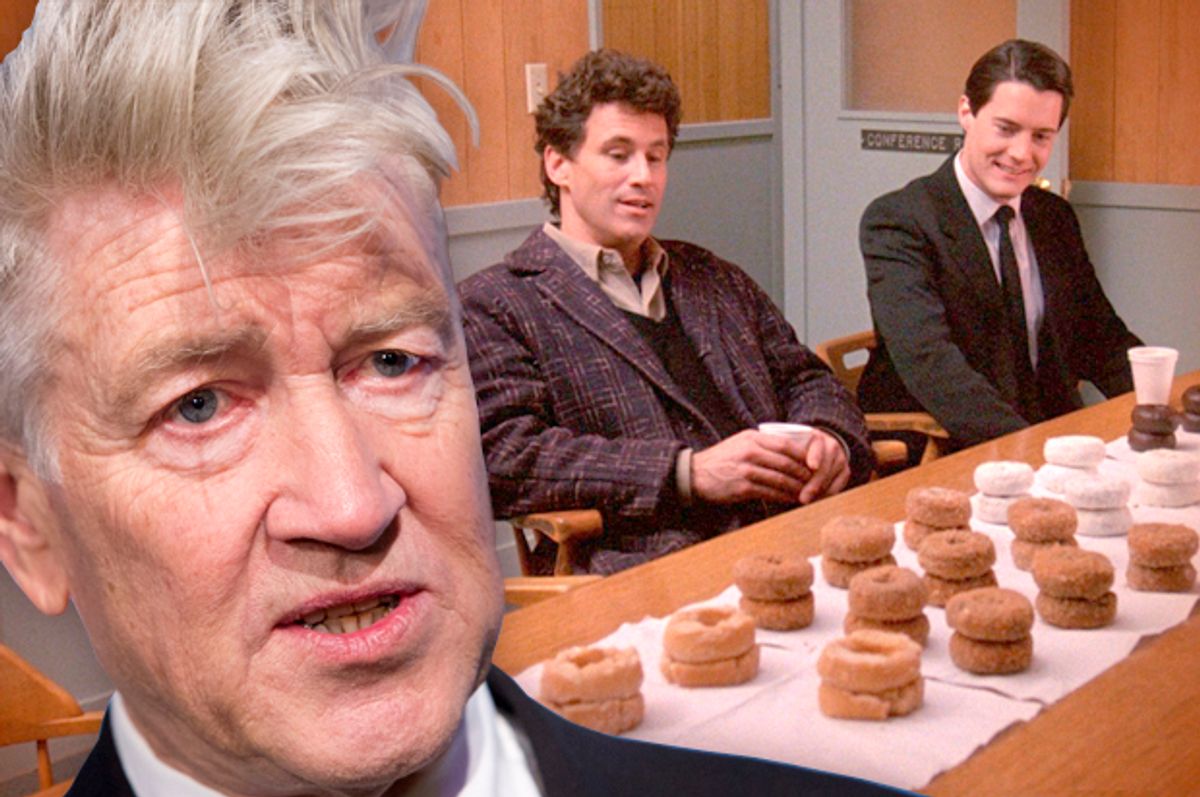 The first time I spoke with David Lynch was on a twenty-minute phone call in 1990. During the entire call, in which we discussed complicated aesthetic matters about “Twin Peaks” for an article I was writing for Film Quarterly, he spoke with the voice of Gordon Cole, the character he played in the series. Weird? Not the way I see it. As a first impression, I was struck by Lynch's imagination, his playfulness, and his ability to make the invisible visible in language--the essence of all good poetry. Twenty-four years and many visits with him in Los Angeles and New York later, my first impression hasn’t changed.

Over the years, he has transformed movies and television by force of his sheer inability to do anything but stay true to his particular sensibility, despite pressures from the industry to work to formula and churn out sausage. From 1977 to 2014, he’s made only nine feature films, a case of less being more—his first being “Eraserhead” (1977) and his most recent “Inland Empire” (2006)--ten if you count the filmed version of his stage production, “Industrial Symphony No. 1: The Dream of the Brokenhearted” (1990). He's made even less television: the TV mini-series “Hotel Room” (1993); and the short-lived series, also co-created with Mark Frost, “On The Air” (1992). And of course--“Twin Peaks,” (1990-1991), the beautiful and revolutionary series he co-created with Mark Frost. And now he has just announced that he is working with Frost on nine new episodes of “Twin Peaks.” I have no doubt that this will be the most original return of a series in the history of American broadcasting. Yet already the show is being referred to as the reprise of a cult favorite.

Lynch himself doesn't like the word “cult,” and for good reason. It sounds like something you might find in a dark closet, or that three people do in secret. And it is in fact restricted by its nature to a circumscribed group. In contrast, the transformative poeticism that Lynch contributed to “Twin Peaks,” to leaven Frost's storytelling, is a universally human form of expression--though sometimes a little education is required to facilitate the transmission. The story of “Twin Peaks”-- a search conducted by a brilliantly intuitive detective, Special Agent Dale Cooper (Kyle MacLachlan) to find the murderer of the beautiful Laura Palmer (Sheryl Lee) in the small Washington State town of Twin Peaks-- transformed mystery as it is routinely conveyed on American television. And we all recognized it, though just what we recognized is hard to put into words, since the nature of poetry is to make words and images new-- and what is genuinely new taxes our powers of speech, even while it exerts an enormous de facto influence on the way we see the world.

Once it appeared on home screens, “Twin Peaks” made a mark on American television, first superficially and then profoundly. American television tends to reduce influence to simple imitation, a mechanistic response that is the opposite of how the imagination works. Shows like “Picket Fences” (1992-1996), and “Northern Exposure” (1990-1995), which immediately followed in the wake of “Twin Peaks,” manifested that watered-down form of influence by placing their episodes in small towns which they loaded up with eccentrics. And the skin-deep variety of the show’s influence on television continues. “The Killing,” about the murder of a young girl in Washington State, again sparked superficial comparisons with “Twin Peaks.” But “The Killing” has little to do with what is truly important about the Lynch-Frost series.

At the heart of the metamorphosis effected by “Twin Peaks” is that, unlike the usual run of shows that invoke mystery only to neatly deliver a pat solution, “Twin Peaks” was able to probe the true nature of the mysterious. Mystery on every level. Of the human heart. Of nature. Of objects. Of human community. Of evil. “Twin Peaks,” which pundits called “bizarre,” “cult,” and “quirky,” using these words interchangeably, isn't any of those things. It is a piercing vision of the realities we all face. And the irony is that the shows that really are bizarre, like “The Brady Bunch,” are considered normal. What's normal about stereotypes and cleanly-resolved tensions and problems? That kind of simplicity is non-existent. The power of Lynch-Frost's representation of real human problems is that it is an intensely imaginative way of perceiving the realities of American life through the refusal to provide easy answers to complex questions. Or initially, that's how it went.

Lynch has told me that the pleasure of creating “Twin Peaks” was polluted by the sadness of having to solve the mystery of Laura's death because of pressure from ABC, the network that bought the series. If you don't believe me, look at “A Slice of Lynch: Uncut,” one of the superb extras in the gorgeously designed new blu-ray box set of “Twin Peaks.” The deep sorrow that comes over Lynch when he talks about that mandated resolution is unmistakable. Happily, when Lynch created the series finale, he took back the “solution,” a point that Lynch does not make in “A Slice of Lynch.”

However, his partial restoration of the endlessness of mystery in the final episode—final as of now--is apparent to anyone who watches the unraveling of all the “discoveries.” Forced to solve the murder of Laura Palmer midway through the series, the writers scripted Cooper to reach the conclusion that her father, leland Palmer (Ray Wise) killed her while possessed by the spirit of the demon BOB. But in the series finale, Palmer tells Cooper, from beyond the grave, that he never killed anyone, and Cooper is possessed by the spirit of BOB, although earlier we were assured BOB was gone forever. Still, even with that recapture of the original “Twin Peaks” spirit, and even if admittedly, in the short run, the capture of Leland and the exposure of BOB made for very compelling television, in the long run it killed the show.

It was the failure of explanation that gave “Twin Peaks” its kick. As long as it was impossible to explain Laura's death coherently or decide whether the thwarted love of Norma (Peggy Lipton) and Big Ed (Everett McGill) was hilariously funny or acutely painful, the audience was enthralled. If ABC didn't know that, the man to whom the torch was passed, figuratively speaking, did. I'm talking about one of the writers of “Northern Exposure,” a guy you may have heard of called David Chase, who created “The Sopranos.” Chase infused the mob story with new life because, taking for his own the gift Lynch offered to everyone who came after him, Chase refused at all points in his series to tie things up neatly and formulaically in ways that spawned clear interpretations.

Like Lynch, Chase invited the audience to enter television through the broad, thrilling gate of the imagination. And he didn't imitatively use a small town in Washington to do it. Matt Weiner, one of the writers for “The Sopranos,” then spread the Lynch-Frost influence further when he took a page from Chase as the creator of “Mad Men,” inviting us into the unfathomable humanity of the advertising mavens of the ‘50s and ‘60s. To a moderate extent, Chris Carter had already “Lynch-Frostized” television somewhat when he created “X-Files” (1993-2002), but that show imagines the wondrous through the lens of the fantastic instead of taking the harder, more fascinating, route of demanding that we see it as a part of ordinary life.

The successes of Lynch-Frost and Chase have also encouraged networks to become more willing to take chances on a better class of formulaic drama, as with “Breaking Bad” and “Boardwalk Empire,” with their powerhouse performances and audacious interest in formerly taboo subjects. Before “Twin Peaks” and “The Sopranos,” the odds are that network officials would have found these projects too risky.

But I hear you saying: What about the Red Room? And BOB. Doesn’t get more cultish than that.

You are, of course, referring to the murderous demon who transgresses all the ordinary limits that restrict human beings. And to the space in “Twin Peaks” bordered by billowing red curtains that appears in Cooper's dream early in the series, in which he meets a little man in a red suit who talks strangely, as well as the dead Laura Palmer. This same Red Room appears again in the series finale when Cooper returns to it in reality, and again sees the little man, Laura, and also a giant, the demon BOB, and a cup of coffee that changes into a cup of ice and a cup of oily goo right before his eyes. You might say: isn't that bizarre, even alienating to mainstream viewers? I reply that it's the most poetic aspect of the series--and also what exerted the most powerful influence on the television that followed “Twin Peaks.”

Artists, as Shakespeare said in Midsummer Night's Dream, “give to airy nothings a local habitation and a name.” And Lynch's name and image for the airy nothing of intuition, for the origin of discovery, at least in “Twin Peaks,” is the Red Room The Red Room is “poetry-speak” for the place of revelation. It is where Cooper makes discoveries that cannot otherwise be made. Revelation doesn't literally come from a place, but where DO ideas and intuition come from? And how do you visualize that origin when you are telling a story? BOB is the visualization of the evil that exists in those who commit atrocities, as Leland Palmer did. This is a simplification but it's close enough to the essence of what Lynch is doing with “Twin Peaks.”

This aspect of “Twin Peaks” has also had its superficial imitators, who tacked on to their tightly wrapped-up storytelling uninspired images of the surreal and the poetic, for example: “Wild Palms” (1993) and “Carnivale” (2003-2005), which were justly mocked by the critics. However the freedom of expression that Lynch modeled has also become a source of genuine inspiration. On “The Sopranos,” David Chase created his own controversial (and poetic) places for ambiguous revelations in Tony Soprano's dreams, and in his experiences of a parallel reality when he was in a coma after taking a bullet from his uncle. “The X-Files” was filled with places of revelation that were ambiguously both real and illusory. And in Matt Weiner's “Mad Men,” the charming vision that protagonist Don Draper (Jon Hamm) has of his dead boss Bertram Cooper (Robert Morse) doing a shoeless dance as he sings “The Best things in Life are Free” has a Lynchian flavor once removed.

And now? It looks like the “next big thing” on television will be a return to the motherlode. We've already had one reunion with the denizens of Twin Peaks, in Lynch's prequel film, “Twin Peaks: Fire Walk With Me” (1992), and too many were critical of that extraordinary film, because it didn't conform to expectations. But expectations may be shaped by too much nostalgia for what we already know, and in his film Lynch characteristically gave us a brand new vision. It would be ideal if we approached the new episodes with more adventurous, open hearts.

Love can only be better the second time around, if we allow ourselves to open up to the paradoxes of an authentically new return. At the same time, I am resigned to the likelihood that lots of people who should know better will continue to call it “Cult.”

Dr. Martha P. Nochimson is the author of six books, including The Passion of David Lynch: Wild at Heart in Hollywood and David Lynch Swerves: Uncertainty From Lost Highway to Inland Empire. She also taught for eleven years at the Tisch School of the Arts at NYU.