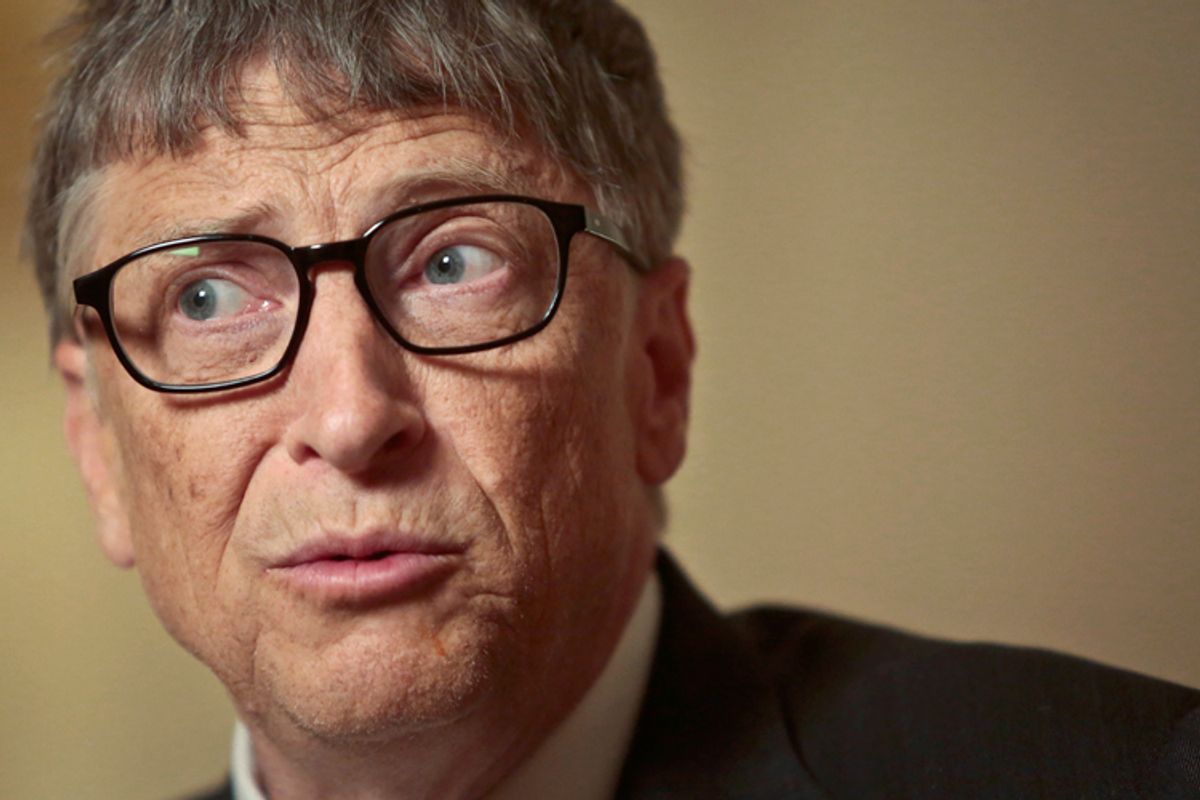 Billionaire Microsoft cofounder Bill Gates has published a review of Thomas Piketty's Capital in the Twenty-First Century, the French economist's widely discussed tome on economic inequality. While Gates accepts that "[h]igh levels of inequality are a problem," he contends that the book has "important flaws" for which Piketty and other scholars should answer. But Gates' critique is itself flawed, and the questions he poses have largely been addressed by Piketty and relevant data.

Gates begins his review by making admissions that may seem plain to many observers, but are nonetheless striking coming from a man with an estimated $79.4 billion net worth. Not only does Gates concede that inequality is problematic, but he also notes that "[c]apitalism does not self-correct toward greater equality" and sees room for governments to "play a constructive role" in curbing the effects of wealth inequality.

But Gates then proceeds to lay out what he sees as the the book's core problems. He starts with a thought experiment, asking readers to picture a wealthy entrepreneur, a wealthy philanthropist, and a wealthy spendthrift. Even though they're each part of the larger inequality problem, can't we acknowledge that "different kinds of capital" can have "different social utility" -- that the entrepreneur and the philanthropist "are delivering more value to society" than the spendthrift?

This is too clever by half. Let's accept that it's a good thing for entrepreneurs to hire people and that philanthropy is indeed commendable. But how does this justify a society in which the average CEO earns 331 times what his or her workers make? Can we really say that the generosity of a rich philanthropist should at least calm us down somewhat about the social effects -- illness, social distrust, worse education outcomes, and higher rates of incarceration, to name a few -- that the larger inequality phenomenon fosters? If inequality is indeed a large problem, as Gates accepts, then noting that some people have used their wealth for good is a red herring. Note, as well, that studies show rich people are giving less of their incomes to charity even as poor and middle income people donate more, and that while the wealthy devote much of their charity to hospitals, art institutions, and universities, low- and middle-income people tend to give to the social service agencies directly involved in ameliorating the effects of poverty and inequality.

Next, Gates takes Piketty to task for failing to "account for powerful forces that counteract the accumulation of wealth from one generation to the next." Gates offers the Forbes 400 list of the richest Americans as a prime example.

"About half the people on the list," Gates writes, "are entrepreneurs whose companies did very well ... Contrary to Piketty’s rentier hypothesis, I don’t see anyone on the list whose ancestors bought a great parcel of land in 1780 and have been accumulating family wealth by collecting rents ever since. In America, that old money is long gone—through instability, inflation, taxes, philanthropy, and spending."

Piketty has already addressed this criticism, which has also been lobbed by Clinton-era Treasury Secretary Larry Summers.. In an April interview with Vox's Matt Yglesias, Piketty noted that "it's much easier to spot large entrepreneurial wealth than large inherited wealth. Large inherited wealth typically takes the form of a more diversified portfolio, whereas large entrepreneurial wealth, when you have created a Microsoft or Facebook, it's difficult to hide." In other words, the journalists compiling the Forbes 400 list will have a much harder time calculating Mark Zuckerberg's descendants' wealth, because while publicly available information on Facebook's worth gives us a pretty good idea what Zuckerberg's net worth is, his children and grandchildren's wealth will be spread across other interests.

Finally, Gates writes, "I am also disappointed that Piketty focused heavily on data on wealth and income while neglecting consumption altogether." He explains that "[c]onsumption data represent the goods and services that people buy—including food, clothing, housing, education, and health—and can add a lot of depth to our understanding of how people actually live. Particularly in rich societies, the income lens really doesn’t give you the sense of what needs to be fixed."

This is really just a more sophisticated way of saying that poor people have refrigerators and iPhones now, so let's not panic too much. It's a common conservative talking point, designed to divert focus from the deleterious social effects of inequality and the disastrous economic consequences of the widening wealth gap. As Piketty points out, high levels of inequality -- whether poor people have a few amenities or not -- contribute to economic crises, including the last one.

“One consequence of increasing inequality," Piketty has said, "was virtual stagnation of the purchasing power of the lower and middle classes in the United States, which inevitably made it more likely that modest households would take on debt, especially since unscrupulous banks and financial intermediaries … offered credit on increasingly generous terms.”

Gates' clouded outlook leads him to propose policy remedies, like a progressive consumption tax instead of a wealth tax, that won't be nearly as effective as Piketty's proposals in tackling the problem. Hearkening back to his thought experiment involving three wealthy people who use their wealth in three very different ways, Gates concludes that it would be best to tax unproductive consumption rather than wealth, which Piketty would tax. Gates doesn't get into specifics -- How much would lower-income people be taxed, given that most of their income goes toward consuming vital goods? Is a rich person who contributes funds to build a symphony hall doing any more to combat inequality than an heiress who purchases a private jet? -- but his consumption tax is undeniably far less efficient than a wealth tax.

"Philanthropy," Gates concludes, "also can be an important part of the solution set." For those wary of too much social change, it's a comforting thought -- but it isn't supported by the data on charitable giving, and nor is it a substitute for implementing policies that establish a more egalitarian social structure.