Leon Panetta's self-righteous fury: The truth about another D.C. "maverick"

Leon Panetta has served three presidents, and one thing has been constant each time -- putting numero uno first 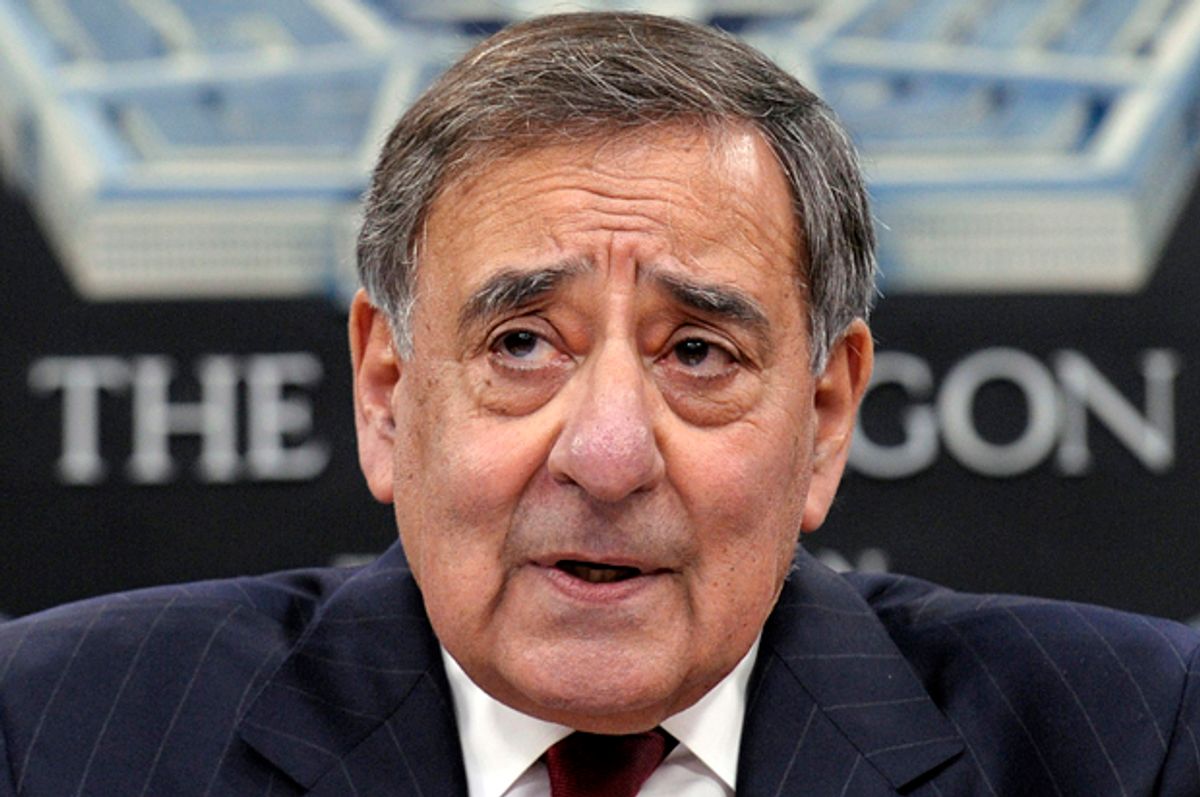 If there exists a more quintessential inside DC player than Leon Panetta, I'd be hard pressed to name him or her.  He's been kicking around the corridors of power for well over 40 years serving first as a Republican and later as a Democrat in Congress and a member of the executive branch.  Leon Panetta is what people in the beltway like to call a "maverick" which translates into someone who goes his own way against the interest of his party. Mavericks are loved by the establishment media for always being willing to condemn their own side thus creating an illusion of bipartisanship where none exists.

Panetta comes by his reputation for integrity honestly, however it's not quite as heroic as people remember. To his eternal credit he resigned the Nixon White House in  1970 over its egregious racial policies.  But he was hardly the lone ranger in his protest. This excerpt from Rick Perlstein's book Nixonland puts his actions into some perspective. The issue bubbled up after Nixon's nominee to the Supreme Court, Harold Carswell, was revealed to be an unreconstructed racist and Nixon defended him. At the same time staffers at the Department of Health, Education and Welfare were all becoming concerned about the policies they were required to enforce (or not enforce) and Panetta was a leader among them.

But Perlstein reports that it wasn't until Panetta read an article in the Washington Daily News with the headline "Nixon seeks to fire HEW's Rights chief for liberal views" that he offered his resignation.  And it was after that that he gave a speech to the National Education Association in which he said, "The cause of justice is being destroyed not by direct challenge but by indirection, by confusion, by disunity and by a lack of leadership and commitment to a truly equal society." Six others resigned with him. Shortly thereafter 200 staffers at HEW petitioned the head of HEW Robert Finch saying they were greatly concerned about the future leadership role of HEW on civil rights.

None of that is to take anything away from what Panetta did and said.  Resigning from a government job when you disagree with government policies is honorable and necessary.  Indeed, his position stands in contrast to another revered bipartisan maverick, Daniel Patrick Moynihan, who was quite churlish about the whole thing.  Perlstein in Nixonland:

On March 1, the New York Times published a leaked memo from Daniel patrick Moynihan.  The White House was putting "as much or more time and effort from this administration than any in history" on civil rights, he reassured the boss. But the administration wasn't getting the credit because the discourse was controlled by "hysterics, paranoids, and boodlers on all sides...

The time may have come when the issue of race could benefit from a period of benign neglect. The subject has been too much talked about."

(One of the maverick Moynihan's major contributions to American politics was his uniquely destructive paper on the alleged dysfunction of the African American family which informed policies on race for decades.  And not in a good way.)

Panetta, however, wasn't truly reviled by the White House until he did this:

[I]n 1971, Panetta published a book, Bring Us Together, which was meant to be an insider's look at what he conceived of as Nixon's deeply flawed civil rights policies. The book was highly publicized, and certainly did not go unnoticed by the Nixon White House.

On May 27, 1971, President Nixon and domestic aide John Ehrlichman discussed Panetta's book in the Oval Office. Ehrlichman told Nixon that the book made HEW Secretary Finch look "bad" and "weak". Nixon and Ehrlichman noted that the book did not give any credit to the administration for its efforts towards civil rights reforms. Interestingly, while disagreeing with the content of the book, Ehrlichman told the president that he planned to have his entire staff read the book.

The following day, May 28, Nixon Chief of Staff H.R. "Bob" Haldeman also brought up Panetta's book to President Nixon in the Oval Office. Nixon summarized that the book was "a case history on how to screw the White House" by taking advantage of a "soft" cabinet member, Robert Finch. Nixon had a concern that it would help to create a pattern whereby other potentially dissatisfied administration appointees could quit and then write a tell-all book that would embarrass the White House.

One can certainly understand why the Obama administration would not be concerned by this. After all, Panetta wrote his tell-all book about the Nixon administration during that fraught second term and his position was admirable. They could not be expected to assume that Panetta would be disloyal to them simply because he had the integrity to oppose Richard Nixon.

By the time Panetta joined the Clinton administration he had been a nine-term member of congress and apparently racked up so much experience that he qualified himself for any available job in the executive branch, whether domestic or foreign policy. He was hired first as budget director from which position he relentlessly pushed deficit reduction as the greatest threat to American economic security and won the day when he (among others) persuaded Clinton to abandon his "putting people first" agenda. He was a balanced budget fetishist, never letting up on the fearmongering regardless of the circumstances, an obsession that he continued throughout the Bush years and continues to this day.

Ultimately he was tapped to become Clinton's chief of staff after a series of mini-scandals, a job he did well and held until January 1997. One year later the Lewinsky scandal broke and Panetta was one of the first to throw "resignation" on the table, an act that made Republicans rub their hands together gleefully and form their crusade to force Clinton out of office (not incidentally, the way Nixon was forced out of office.) This was just days after the affair was revealed:

"If these are baseless charges, it'll be OK. On the other hand, if there's something there, and it leads to him having to step out of office, it may be time to do some repair work and that may not have the consequences you would expect," Panetta said.

If the charges are true, Panetta said, it would be better for the Democratic Party "if Gore became president and you had a new message and new individual up there."

Perhaps the Obama administration didn't see that as a further sign of self-serving "maverickyness." After all, he wasn't alone in making that snap judgement which, in hindsight, was a premature capitulation to a daft partisan witch hunt. Still, a pattern was discernible. Once out of office, Panetta had publicly taken both presidents he served to task before they were out of office.

If there's one thing on which Panetta prides himself, it's his devotion to the notion of bipartisanship and centrist solutions. Back in 2008, when the new Obama administration was attempting to fulfill its campaign promise to "transcend partisanship" Panetta was an obvious choice. He had long term relationships in government and was respected by both parties. Prior to the election he was quoted all over the media talking up, you guessed it, deficit reduction:

Leon Panetta, Clinton's first budget director, says that ``if we continue to run these large deficits, not only bond traders but the securities markets are suddenly going to awaken with concern about whether or not the administration is doing anything to discipline the budget.''

If that happens, Panetta says, "it's just a matter of time before they start to put pressure on a new administration.''

He said this in August 2008 as the economy was falling into an epic financial crisis. The Obama transition team apparently felt they had enough deficit fetishists on board (and they did) so they tapped Panetta for CIA and later, Defense where he seemed to have done an adequate job. He left the administration in 2013.

And then he wrote another book. And in that book he condemns President Obama in no uncertain terms for his alleged unwillingness to confront the threats we face abroad, painting himself once again as a heroic truth-teller within the administration who tried as he could to change course and keep the babies safe.

The Obama administration is not amused:

Tommy Vietor, the former spokesman for Obama’s National Security Council, says that based on “talking to my friends back at the White House … they are going out of their way to avoid a messy public fight.” But Vietor adds: “Secretary Panetta was very clear back in 2011 that he wouldn’t allow troops to remain in Iraq without the necessary protections from the Iraqi government, and I think it’s reasonable for the White House to remind people of those statements.”

According to another senior administration official who has worked with Panetta in the past, the level of anger at him goes well beyond Vice President Joe Biden’s mild criticism of Panetta’s book as “inappropriate.” Officials were incredulous when the former Pentagon head sought to justify his suddenly public slaps at Obama as evidence of his loyalty, telling “CBS This Morning” host Charlie Rose on Wednesday: “It’s exactly because I am very loyal to this president and because I want him to succeed that I think it’s important to raise these issues now … So that hopefully in 2½ years, you know, we can make sure that he really does have the kind of legacy that I think he deserves as president.”

“That’s an incredibly patronizing statement. That isn’t loyalty. It’s a reinvention of history. It doesn’t comport with reality. I can’t see how this helps the administration’s foreign policy,” this official said. The official also added, cuttingly, that while Hillary Clinton could legitimately claim to have been a hawk on Syria, advocating arming the rebels, Panetta could not. “Hillary was really telling the truth when she said she wanted to arm Syrians, but I don’t know anyone who remembers that Panetta was particularly vocal about that. He raised more questions about it than advocated it.”

It's impossible to know who is telling the truth. But it's not impossible to acknowledge that Leon Panetta, for all his apparent talent at a wide variety of government jobs, is all about Leon Panetta. Where he was once a hero for resigning over an issue of principle, it's hard to escape the realization that he has parlayed that early admirable moral stand into a habit of burnishing his own reputation, at the expense of the presidents he works for. Like the other "mavericks" of our time -- John McCain and Joe Lieberman come to mind --  he is concerned about one thing and one thing only: his own sense of righteousness. They could have seen this coming.