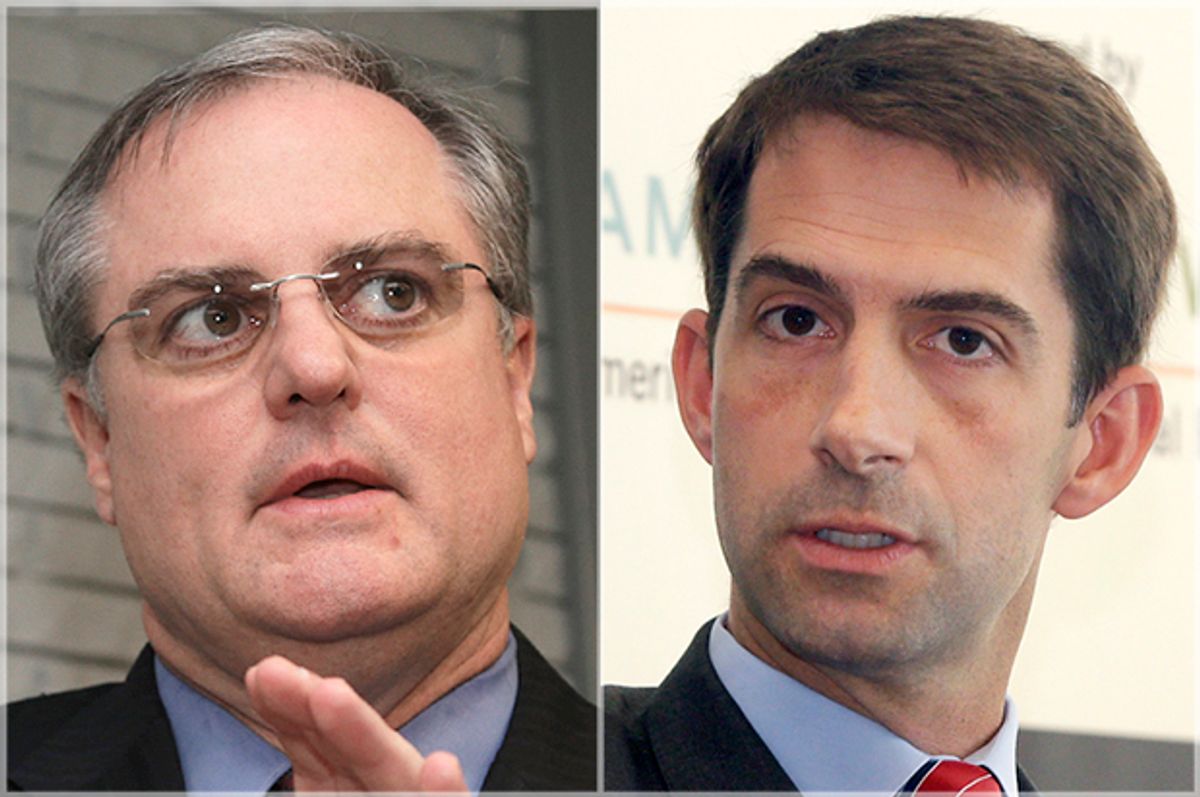 Watching yesterday’s Arkansas Senate debate, a few things became clear. The first, and most significant, is that the Republican candidate, Rep. Tom Cotton, is in fact some sort of android. The man does not deviate from talking points. Ever. It seems unlikely that he is capable of saying something that isn’t a talking point. Ask him a question on any topic – campaign ads, wars in the Middle East, domestic spending, whether or not brunch is for jerks, it doesn’t matter – and he will find some way to transform his answer into a treatise on how Sen. Mark Pryor and Barack Obama are the same person.

Every time Cotton opened his mouth, he inevitably ended up denouncing Obama or Obamacare and pivoted immediately to claiming that Pryor supported the president 93 percent of the time. That, obviously, was Cotton’s strategy, and it was abetted a great deal by the awful format, in which Pryor, Cotton, and the two minor party candidates were shepherded rigidly from topic to topic, allowed infrequent rebuttals, and safeguarded from follow-up questions.

The shortcomings of this format became apparent early on when, in response to a question on the responsibility of candidates to be honest in their campaign advertisements, Cotton launched into his usual anti-Obama litany. The reporter who asked the question interrupted him: “Are you answering my question about what your job as a candidate is? Or are you just doing talking points?” That’s when the moderator jumped in and corrected the reporter for trying to make Cotton answer her question. “I have to allow him to go ahead,” he said, “because we have no provision for a follow-up question right away.” Thus, any danger of the debate actually getting interesting was quickly neutralized, and Cotton was free to launch right back into his talking points.

Speaking of those talking points, it’s pretty clear that Cotton has no problems telling lies or getting caught in them. On matters of basic policy, he was bending and fracturing the truth wherever he could, but he reserved some of his best untruths for the Affordable Care Act.

The ACA “is going to cost 2.5 million jobs,” Cotton said, re-upping a long-since debunked attack on the health reform law. “In Arkansas, we can expect premiums to increase by 138 percent,” Cotton said, referring to an analysis of state-by-state health insurance premiums conducted last November by a conservative think tank. (Premiums in Arkansas are actually expected to decline slightly, after years of increases.) “Sen. Pryor voted to cut Medicare by $700 billion to pay for Obamacare.” My god… are we still kicking around that hoary old chestnut?

Cotton also defended his vote against the farm bill, which is a pretty big deal in Arkansas, by claiming that he was just trying to shake up the status quo in Washington by decoupling the Supplemental Nutrition Assistance Program (“food stamps”) from the agricultural legislation. “Sen. Pryor and Barack Obama insist on doing things the old way, keeping them combined. That’s the status quo,” Pryor said, saying they should be voted on separately because (he didn’t explain why). That’s a bit of a curious statement for Cotton to make, given that he just recently released an ad – an ad he insists is completely accurate – claiming that “President Obama hijacked the farm bill” and “turned it into a food stamp bill. So the “status quo” is also a “hijacking.” Feels totally consistent to me.

Unfortunately, when it came to lying like this, Cotton was at an advantage. The debate moderator had already made clear that questioners weren’t allowed to interrupt or challenge a candidate until the rules said they could, so it would have to fall to the other candidates to get the job done. But even then, the format worked in the dissembler’s favor. Cotton made it his business to attack Pryor and fire off misleading attacks on a policies Pryor supported, but Pryor never had the opportunity to respond immediately. Each candidate was made to speak in turn, going in the same order every time, which meant that Cotton would attack Pryor, then the Green Party candidate would get his turn to talk, and then Pryor could respond.

But even when Pryor did get his turn to fire back, he was never able to get Cotton off his game or force him off the canned talking points. Criticizing about Cotton’s misleading ads, Pryor said “one thing you just heard about from my opponent, and one thing you’ve seen in his ads, is that his rhetoric is very clever,” thus finding a way to criticize his opponent in way that sounded like a compliment.

That’s not to say there weren’t moments when Pryor was more direct and challenged Cotton effectively. He rightly pointed out that Cotton’s pro-ACA repeal stance leaves people with preexisting conditions in the lurch, and he prefaced his own closing statement by accusing Cotton of telling a “whopper” on tax policy. And Pryor’s defense of Arkansas’ “private option” for Medicaid expansion under the ACA was strong. But overall, Cotton got away with a lot of nonsense.

Pryor and Cotton are meeting for another debate tonight, and this time it will be just the two of them, which hopefully should offer more opportunities for the two to actually engage one another. If Pryor can put the screws to Cotton, who knows… he might just get him off message for a moment.