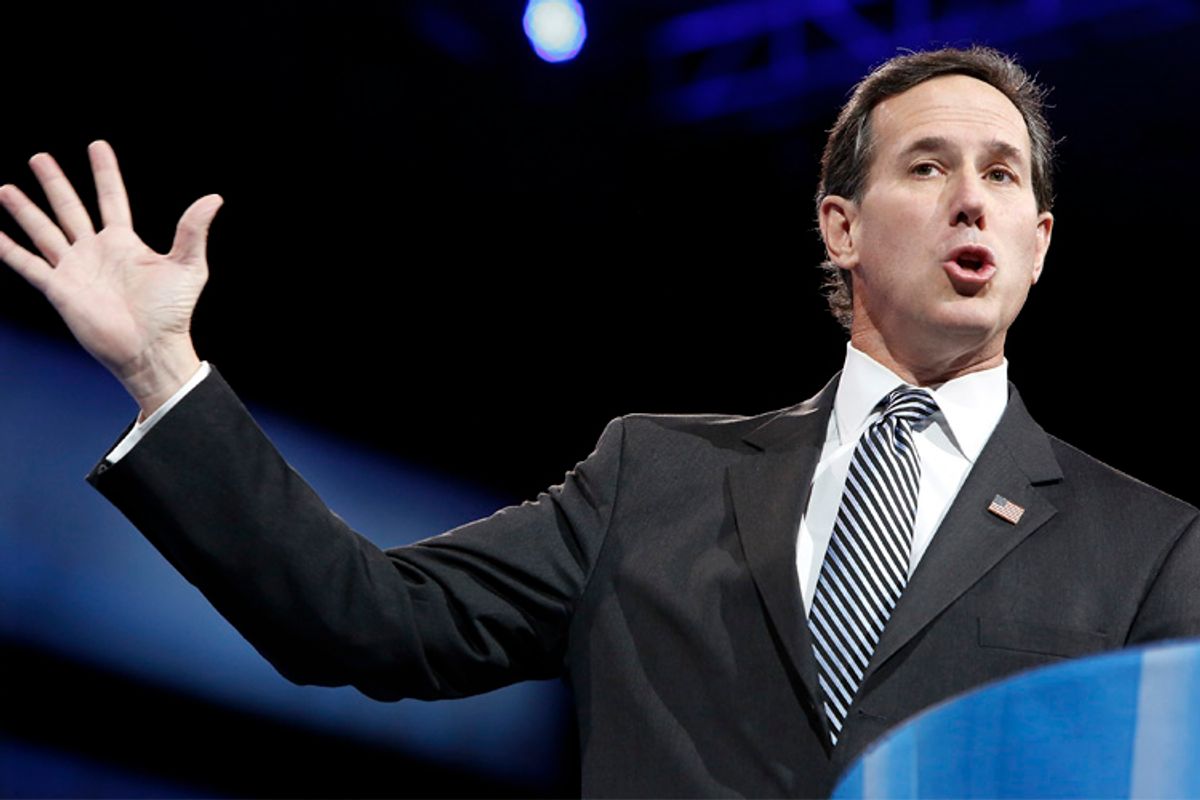 Rick Santorum thinks he knows just how to advance the fight against "man on dog" sex, "blah people" feeding at the welfare trough, and liberals who "make it uncomfortable" to shower at the YMCA. That's right -- the former Pennsylvania senator, who lost his seat to Democrat Bob Casey by 18 points in 2006, is threatening to run for president again.

In an interview with RealClearPolitics' Scott Conroy, Santorum said he's "doing everything right now as if I’m running." While he won't firmly decide until next year, it's clear which direction Santorum is leaning.

"We’re talking to folks who might be interested after the [midterm] election to come and help the team, so we’re starting to put the pieces together," Santorum told Conroy.

Channeling George W. Bush, Santorum told Conroy what a "blessing" it is to be consistently misunderestimated as a political figure.

“The greatest blessing I’ve had in politics is being underestimated and overlooked," Santorum said. "And it’s happening again, and I’m very grateful. I know we have a strong base of support, and I think when we have an opportunity to show our message, that base will grow and will be in places that no one will expect.”

Here's the thing, though: Santorum is about as likely to capture the GOP nod in 2016 as he is to make an appearance at the Folsom Street Fair. Yes, as Conroy notes, "[f]ive of the last six men who became the Republican nominee had finished in second place during a previous White House run." But Santorum finished second in a uniquely awful GOP field in 2012. Many big-name GOPers who passed on that race will toss their hats into the ring this time, while newer faces like Ted Cruz will draw on the same social conservative base of support that propelled Santorum nearly three years ago.

Santorum won't be deterred, though. With billionaire backer Foster Friess ready to pony up for yet another Santorum campaign, we're all but certain to be treated to another round of Santorum's thoughts on the evils of contraception, marriage equality, and the 21st century.