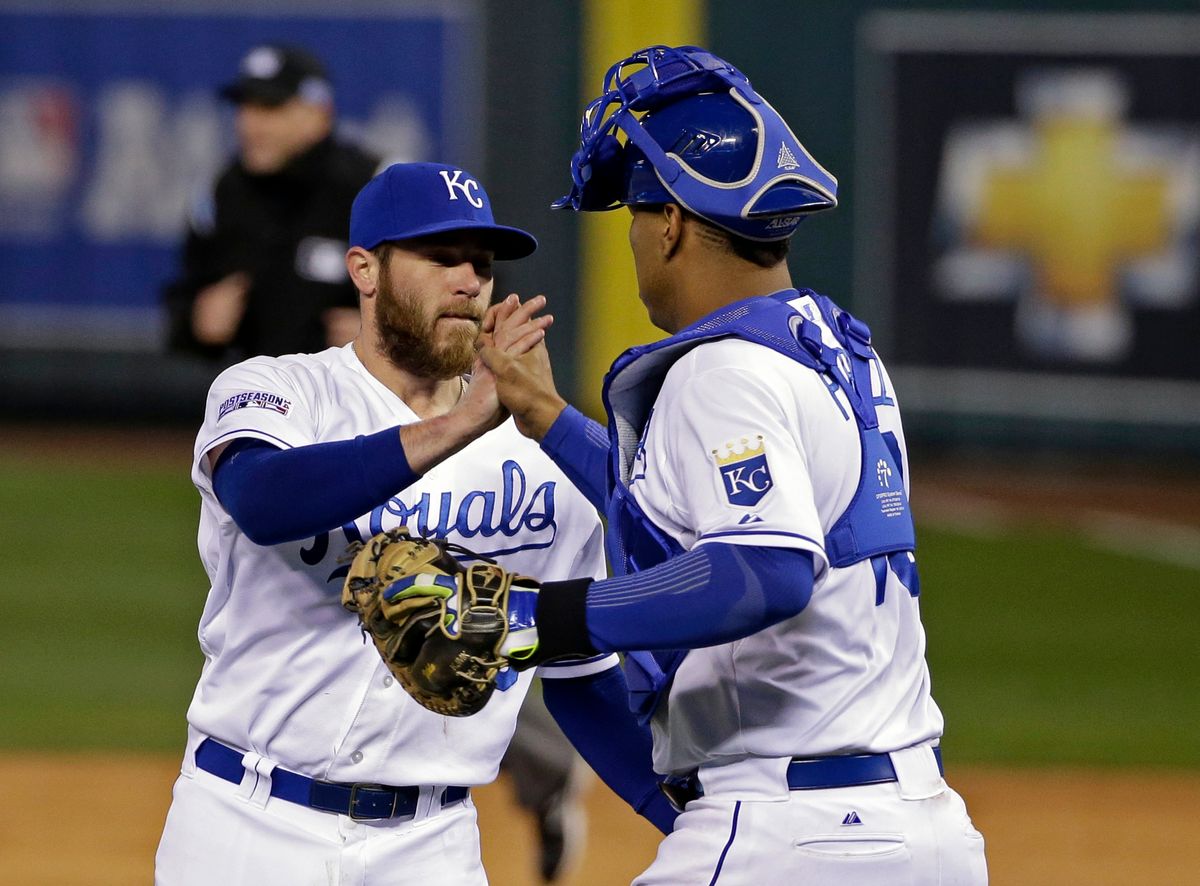 After all these years, one more win. That's how close the Kansas City Royals are to reaching the World Series.

Raise your hand if you saw it coming this season.

Perfect so far in their first playoff appearance since 1985, the wild-card Royals go for a four-game sweep of Baltimore in the AL Championship Series today. First pitch is set for 4:07 p.m. EDT.

Just imagine the celebration that could be on tap.

"We've got a snowball effect going right now," Billy Butler said after hitting a go-ahead sacrifice fly Tuesday night during a 2-1 victory in Game 3. "The confidence couldn't be any higher."

Left-hander Jason Vargas gets the ball for Kansas City in Game 4 at Kauffman Stadium. Miguel Gonzalez will start for the Orioles as they try to stave off elimination.

"It's hard to take advantage of mistakes when they're not making any," Baltimore first baseman Steve Pearce said.

The Royals have won 10 consecutive postseason games, including all seven this year. The streak dates to the final three games of the 1985 World Series against St. Louis.

And for once, history is on Kansas City's side.

Baltimore is the 34th major league team to trail 3-0 in a best-of-seven postseason series. The only one to come back and win was the Boston Red Sox in the 2004 ALCS against the New York Yankees.

Vargas has not started since Game 1 of the AL Division Series against the Los Angeles Angels on Oct. 2.

Gonzalez's last start was his final regular-season outing on Sept. 28.

"I'm going to try as best as possible to give our team a chance," he said.

Brandon Crawford has a little secret for everyone watching these back-and-forth games in the NL Championship Series. They're not always as nervy as they look.

"On the field, we just kind of relax and try and play the game," the San Francisco shortstop said. "But probably from the stands, it's a little more tense."

Fresh off a bottom-of-the-10th win on a botched bunt, his Giants will try to take a 3-1 lead tonight when they host St. Louis.

Ryan Vogelsong pitches for San Francisco. He's 3-0 with a 1.19 ERA in five career postseason starts, and the Giants have won each of those outings.

Shelby Miller makes his second postseason start for St. Louis. No telling yet if star catcher Yadier Molina will play — he was sidelined in Game 3 because of a strained left oblique.

Wow. Two more one-run games in a postseason full of them.

In another tension-filled day this October, the Giants needed 10 innings to beat the Cardinals 5-4 in the NLCS and, a few hours later, the Royals topped the Orioles 2-1 to move one win from a trip to the World Series.

Overall, 13 games have been decided by one run this postseason, matching the record set in 2011 and tied last year. Six games have gone to extra innings, including Kansas City's first three postseason games in 29 years. San Francisco needed 18 innings to beat the Washington Nationals in Game 2 of their Division Series in the longest playoff game in history, 6 hours, 23 minutes.

Three of the 22 games have ended in a walk-off — and an ecstatic celebration.

The last at-bat wins have come in every way possible: a home run by Kolten Wong in St. Louis on Sunday, a wild throw by Cardinals reliever Randy Choate on a bunt in San Francisco yesterday, and the Royals' Salvador Perez had a 12th-inning RBI single in the wild AL wild-card game.

"There's always these surprising things that happen in baseball. You can't really explain them." — Kansas City third baseman Mike Moustakas after the Royals improved to 7-0 this postseason.

"Gosh, these last few years have been really interesting. I've seen the whole country and realized that San Francisco is home and it's the place to be. ... The alternative of being home watching baseball, being a minor league free agent, is not as exciting as being up here talking to you guys and being able to talk about having the hit." — Travis Ishikawa in a postgame media session after hitting a three-run double that helped the Giants beat St. Louis 5-4 in 10 innings. Ishikawa was Pittsburgh's opening-day first baseman this year; in the last three seasons, he has also played for Milwaukee, Baltimore and the Yankees, along with Triple-A stops in Norfolk, Nashville, Charlotte and Fresno.