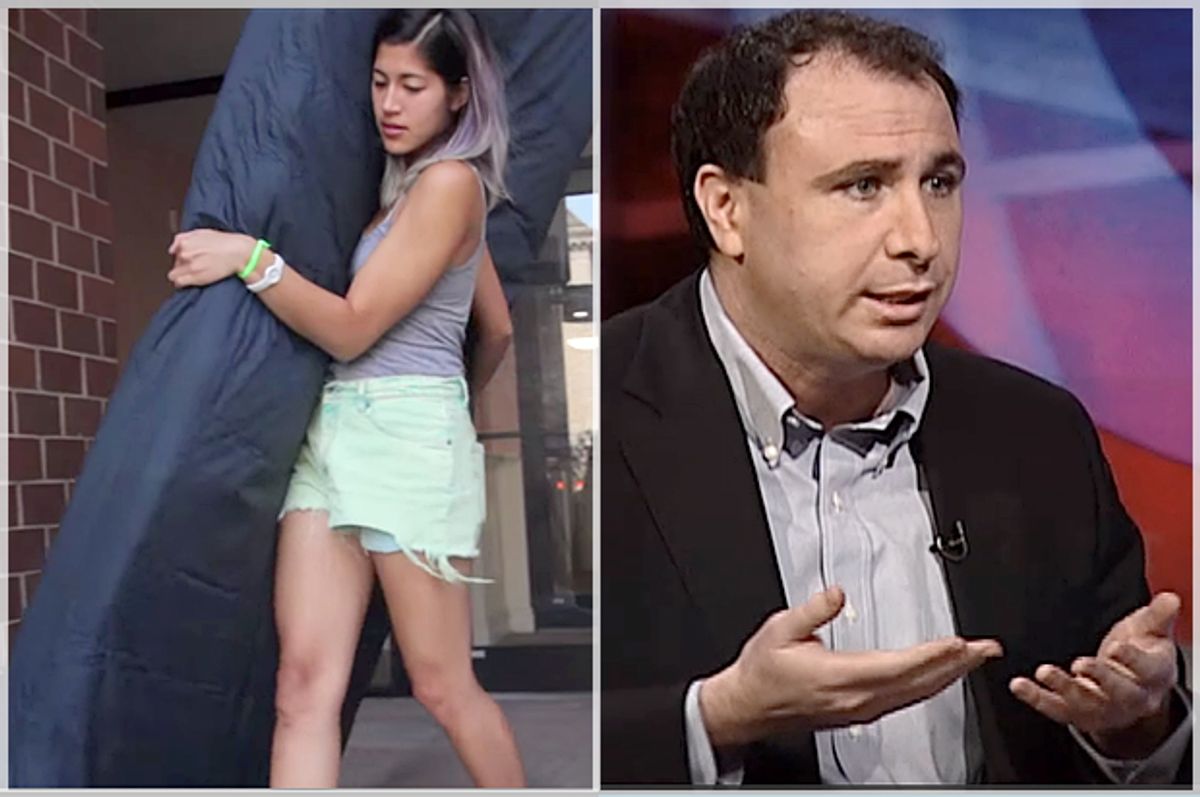 Last week, New York Magazine's Jonathan Chait argued that California's affirmative consent law, which is not a criminal statute but does change the adjudication of sexual assault cases among schools that receive state funding, redefines "a large proportion of sexual encounters to be rape." He received a lot of pushback, none of which changed his mind. On Tuesday, he doubled down, calling supporters of the law proponents of "illiberalism." He writes: "For various reasons, including the long stalemate in Washington, the movement to confront campus rape has shot up the list of liberal priorities. One can detect in this movement an impatience with balancing risk against liberty that, in other contexts, would be readily recognizable as a tone of creeping illiberalism."

Chait, like so many critics who have advanced identical arguments, is sounding the alarm about the so-called dangers of affirmative consent, writing that the new law "deems as rape any sex that does not have explicit, ongoing permission," and warns that such a "novel approach" will have "unforeseen consequences." He believes that the new standard will result in college men being accused of, and punished for, sexual assaults they did not commit. He also notes that "experts don’t know whether it will work," using a quote from a campus-assault prevention specialist interviewed in the New York Times to bolster his point.

There are layers to be sorted here, but let's start with this: Read the rest of that Times piece and you will learn that the experts it quotes don't know about the longterm impact of affirmative consent simply because research on all assault-prevention approaches is so new. The administrators interviewed, administrators at schools with such policies already in place, said perfectly mundane things like, "Culture change is generally slow, but we have made some headway.”

Contrary to Chait's view, having a reasonable expectation of consensual sex should not be novel, but he is perhaps right to note that some see it that way. Enthusiastic consent is not some mystery or code that very few people have cracked; it's a pretty common part of sex. People already consent to sex in ways that are verbal and non-verbal, in ways that are gentle and rough. Most of us know the feeling of changing positions during sex based on your partner's movements. Of escalating contact based on cues from the person you're with. Of knowing when something isn't working and asking, "Is this OK?" This is what's required under the law. None of which requires longterm commitment or intimacy, just a basic level of interest in having a mutually pleasurable and consensual experience. And for those unfamiliar with those cues, or new to sex entirely, the conversations sparked and required by an affirmative consent standard will be instructive.

Chait is ostensibly writing a rebuttal to a series of Vox stories that, to his mind, are emblematic of the "creeping illiberalism" of the law's supporters. But he dismisses two of these three writers -- Vox's Amanda Taub and Jenee Desmond-Harris -- straight out of the gate. Taub's piece on affirmative consent is one of the most thoughtful engagements with the actual scope of issue that I've read so far, and Desmond-Harris' is succinct in pointing out that this standard already exists elsewhere and has not unleashed a spike in false accusations, but here's Chait's take on their writing: "Stories by Amanda Taub and Jenee Desmond-Harris sweep aside all objections and ignore the qualms of experts in the field in order to ridicule opposition (the law’s critics, according to Taub, 'apparently believe that genuine consent is too significant a burden to place on the pursuit of sexual pleasure')." Chait has nothing to say to these women. (Women who some may also consider experts, since both have law degrees.)

But Chait does feel it's necessary to respond to Vox's Ezra Klein (who tweeted that Taub's piece on the law "completely changed" his mind on the issue).

According to Chait, this, from Taub, is not worth engaging with:

By exempting sexual aggressors from the responsibility of figuring out whether their partners are "eager and ready to sleep with them," we're asking their targets to either give in to sexual activity they don't want, or to run the risk that a firm, assertive, continued rejection will end in violence.

This week, a Detroit man murdered a 27-year-old mother of three named Mary Spears after she rejected him in a bar. Right now, a woman is in critical condition in a New York City hospital because a man slashed her throat on the street after she declined to go on a date with him. In April, a Connecticut teenager was murdered by her 16-year-old classmate after she turned down his invitation to prom. Stories like these (and there are others) should remind us that women have a lot of reasons to fear the consequences of saying "no." That's all the more reason why silence shouldn't be presumed to be consent.

This, from Desmond-Harris, isn't either:

Before the passage of this law, the affirmative consent policies it requires were already in place in the entire University of California system, not to mention most Ivy Leagues and other universities. There's been no disaster.

There aren't reports of rampant retroactive, "I didn't affirmatively consent" allegations, nor crises of conscience on the part of couples that fail to establish consent with every sex act and then have to live with the fact that they're technically violating their school's policies.

This is perhaps me stepping into precisely the "anti-freedom" trap Chait set in his premise, but I have asked this question before and now I am asking it again: When will women's lives and safety matter more than abstractions? For Chait, the concept that must be preserved at the expense of women's physical safety is capital "L" Liberalism. Chait goes hard for Liberalism while erasing the operations of power that make shifting the norms around consent so crucial, the historic and systemic nature of the violence being confronted by these laws. Because that would, perhaps, messy his analysis.

Because he seems to want to talk abstractly about laws that increase Freedom, not laws that increase freedom -- namely, for women. This is the freedom that Taub described when she wrote about the burdens women face under the standard of presumed consent. The way it polices choices and movement, prevents women from conducting themselves under the great capital "L" Liberal value of full equality with the men in their lives.

In his piece last week, Chait conceded that addressing campus assault may not have a clean solution. (Matters of justice rarely do.) "Obviously, failing to convict a guilty rapist is bad, too," he acknowledged. "There is no downside-free resolution that would avoid unfairness one way or another." But, in this messy calculus, he, like so many others, appears content to side with the "resolution" that leaves women vulnerable to repeat victimization -- once through assault, then a second time through a system that ignores and all but condones the violence.

Chait, like Cathy Young and similar critics, seems mostly concerned with the possibility of false accusations. False rape accusations happen, albeit very rarely. They are awful to the person impacted by the accusation. We we can talk about this, and seek resolutions, and engage meaningfully to make schools bring transparency to the hearings process while not elevating the possibility of a wrongful penalty over the possibility of justice for the not-at-all-hypothetical women who will be raped in their lifetimes. The women, a coordinated national network of activists and survivors, whose faces we see at Senate hearings on campus assault. Women like Emma Sulkowicz, who has pushed us to think about the burden inaction places on women's lives. And every other woman whom we have never seen, will never see, because they have never shared their story. Because they know the system is stacked against them.

This piece is already too long, so I'll try to be brief in wrapping up. I am not persuaded, by Chait or even Klein's reservations, that the affirmative consent standard will redefine most sex as rape or will result in a spike in false accusations and wrongful penalties. Because, as Desmond-Harris pointed out, this has not happened elsewhere that the standard has been adopted. And such an argument ignores the realities of rape -- that the standard of passive consent is one that has left far too many women vulnerable and self-blaming after being assaulted. That the standard of passive consent has been weaponized by the kind of serial predator who, according to researchers David Lisak and Paul M. Miller, characterizes the greatest threat to women on college campuses.

Our current system is broken. California's affirmative consent law is not a criminal statute, so it will not be sending young men to jail. (And as a critic of incarceration-centered approaches to violence against women, I'm good with that. I don't think incarceration "solves" the problem of violence.) But the actual criminal justice system, like so many current university systems, does not hold rapists accountable, and does not offer justice for victims. We have seen this play out time and again.

Chait's analysis erases a history in which men have systematically used sexual violence as a weapon against women and in which women have been abandoned by the courts, not the other way around. That is what prompted this shift. In practice, I believe the change brought about by affirmative consent is small. But in terms of awareness and accountability, it's massive. And that means powerful people -- in this case, overwhelmingly men who have benefited from sexual entitlement, male privilege and a system that placed the burden of women's safety squarely on women's shoulders -- will have to rethink how they engage in sexual relationships. They will have to rethink sex because the old way came at the expense of women's lives and safety.

The message, echoing across campuses and a growing number of state legislatures right now, is that the old standard was bullshit. The conversation does not end at affirmative consent, but it's one of the places where it starts. If badly compromising women's safety and access to justice is something Chait and other critics are willing to swallow in order to preserve a broken system -- if that's what Chait's Liberalism looks like -- then he can keep it. Because justice isn't a liberal concept, it's a profoundly, wildly radical one.