From racy Halloween costumes to slashers where all the non-virgins die, we're obsessed with the terrors of sex 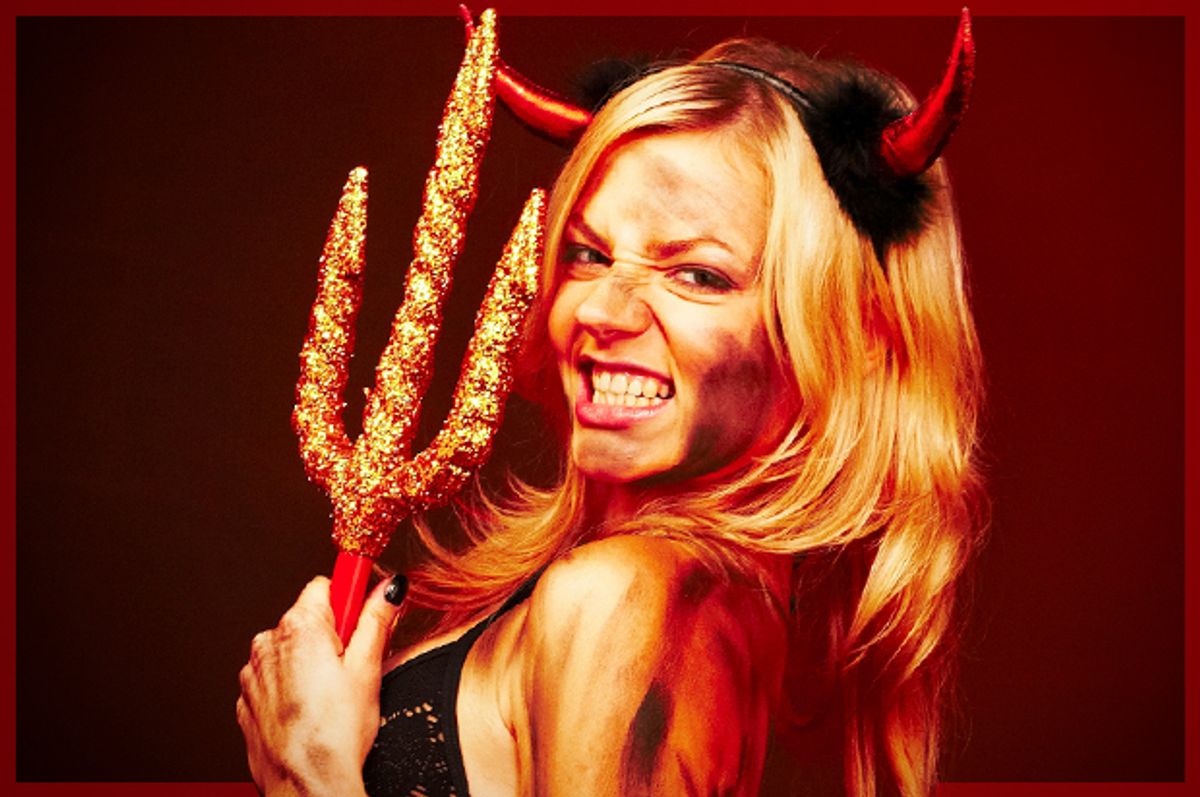 I decided to ask the demon herself, one Lorelei Lee, a performer, director and author. "Well, in my experience, people get very turned on by fear," she said. "Fear drives endorphins and endorphins heighten sensation to make pleasure more pleasurable." Whether it's watching a horror movie where you know there's a bad guy around the corner or having sex with someone for the first time, there is "anticipation, tension, suspense," she points out. "These are all elements of fear, and they're all emotions that, when used effectively, get us to forget to analyze a situation with our rational brains. For a lot of people, sexual desire isn't fully satisfied unless they can let go of the critical and rational part of their brains -- fear can help you get there faster." The similarities between sex and scares don't end there, either: "The fear and release of fear acts really similarly to an orgasm -- a building up of tension, followed by a rush of endorphins."

Maybe you remember that legendary fear-inducing suspension bridge experiment from your Psych 101 class. Researchers found that "sexual attractions occur with an increased frequency during states of strong emotion." This is referred to as the "misattribution of arousal" -- although misattribution doesn't mean that it doesn't work. Clearly, it does the trick.

Now here is where theory on sex and horror takes a dark turn -- for the academic. But we're too far from home now, we can't go back!

In the essay, "Monster Movies: A Sexual Theory," Walter Evans argued that horror films chiefly represent the terror of becoming a sexual being. They "are expressions of adolescent fears that accompany puberty," he writes. "The adolescent finds himself trapped in an unwilled change from a comparatively comprehensible and secure childhood to some mysterious new state which he does not understand, cannot control, and has some reason to fear. Mysterious feelings and urges begin to develop and he finds himself strangely fascinated with disturbing new physical characteristics -- emerging hair, budding breasts, and others -- which, given the forbidding texture of the X-rated American mentality, he associates with mystery, darkness, secrecy, and evil." It's plausible enough to argue that this sense of horror at our own sexual desire lingers long after puberty -- hence scary movies finding an audience among adults too.

In his legendary take on this dynamic duo of sex and fear, pleasure and pain, critic Robin Wood argued that it's all about sexual repression, my favorite scapegoat of all time. "One might say that the true subject of the horror genre is the struggle for recognition of all that our civilization represses or oppresses, its reemergences dramatized, as in our nightmares, as an object of horror, a matter of terror, and the 'happy ending' (when it exists) typically signifying the restoration of repression." Wood's take is heavy on the psychoanalysis: "In a society built on monogamy and family there will be an enormous surplus of sexual energy that will have to be repressed; and that what is repressed must always strive to return."

More recently, though, Linda Badley argued that the Freudian take is outdated in the age of Cronenberg and Lynch. In "Film, Horror, and the Body Fantastic," she wrote, "These movies do not testify to repressed sexuality but instead reflect our saturation with sexual images and options, a state of cultural hyperconsciousness, confusion, and terror." We're scared of things like "teen pregnancies, feminism, the 'crisis' of masculinity, sex scandals (evangelists, politicians, superstars), pornography, child pornography, sexism, sexist language, sexual harassment, rape, incest" -- she goes on. Badley believes that contemporary horror movies are defined by sexual panic, not repression.

Relatedly, Stephen King once wrote of his famous teen-revenge thriller, “'Carrie' is largely about how women find their own channels of power, and what men fear about women and women’s sexuality ... which is only to say that, writing the book in 1973 and only out of college three years, I was fully aware of what Women’s Liberation implied for me and others of my sex. The book is, in its more adult implications, an uneasy masculine shrinking from a future of female equality.”

Horror as backlash! That brings me to perhaps the most obvious cultural explanation for the sex-terror link: Scary stories function as morality tales. They're warnings for women. “The sadomasochistic teen horror film kills off the sexually active ‘bad girls,’ allowing only the nonsexual ‘good girls’ to survive," wrote Williams. "The horror film may be a rare example of a genre that permits the expression of women’s sexual potency and desire ... but it does so ... only to punish her for this very act, only to demonstrate how monstrous female desire can be.”