It's normal for teens to sext

I used to think finding my kids sexting would be one of my worst parental nightmares. But not anymore 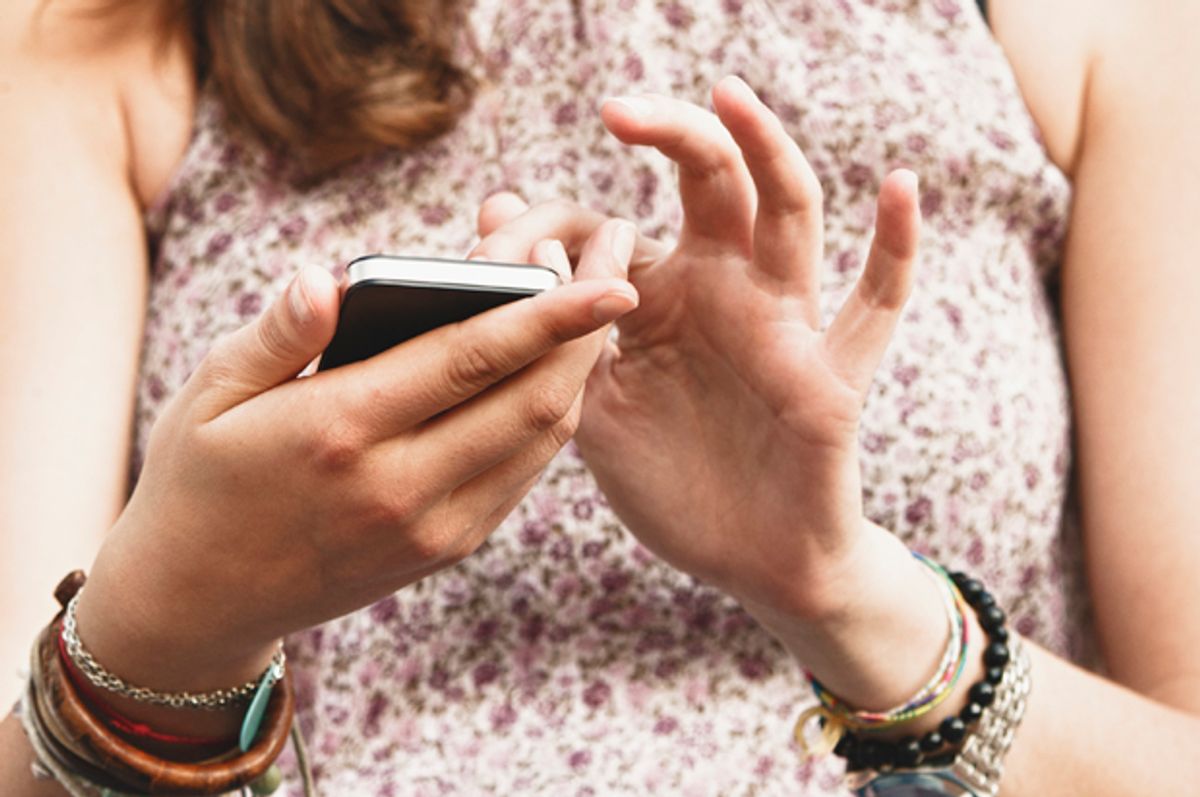 If you asked me, “do you think your kids should sext?”, I would categorically say no. My kids are 10 and 5 so this mercifully doesn’t apply to me (yet), but I always thought that if I found my kid sexting, I’d take away their phone. I’d shut down accounts. I’d ground them for life. I’d lock myself in my bedroom in a fog of guilt, pulling out tufts of my own hair and wondering where I’d gone wrong.

But yesterday I read Hanna Rosin’s informative, in-depth piece about teenagers sexting in the November issue of “The Atlantic.” While much of Rosin’s article details the Louisa County, VA texting scandal where hundreds of girls’ photos landed on an Instagram account, she also informs every parent what we already fear about sexting: there’s not much we can do about it. It’s social currency. It’s one of the many ways kids communicate.

The 16-year-old then said to her mother: “Would you really make me stand on the street with a giant naked picture of myself?”

“If you’re dumb enough to send a naked picture,” my friend replied, “then you’re standing on a street corner.”

But when we get to the point of publically humiliating our kids, or where we’re taking away the phone, or grounding her for life, or smashing your daughter’s phone with a baseball bat—then we’re thinking about it wrong. First, as Rosin explains, we’re missing an opportunity to understand why our kid sent a naked picture. “Instead, parents should take a deep breath—even in the most uncomfortable scenarios—and ask questions. Because unless you ask, you don’t know if it’s just reasonable experimentation or something else.”

Just look at what happened when the Louisa County sheriff’s office collected evidence for their sexting ring. They had hundreds of phones. “I told the deputies, ‘We got to draw the line somewhere or we’re going to end up talking to every teenager in the damned county!’ ” Major Donald Lowe, who was central to breaking the case, told Rosin.

Rosin’s article, and all of her findings, and the evidence from the Louisa County police department, and the evidence from all the other police departments across the country, tell us that sexing is a new kind of language for teenagers. Though the boys interviewed in Rosin’s article said that sexting was done by “sluts”—because sexting falls into yet another exhausting double standard: if you sext, you’re a “slut,” if you don’t sext, you’re a “prude”—the truth is, most kids who sext report doing so in the “context of a relationship.” It’s a form of sexual activity, Rosin explains.

The kids you should be more worried about, studies say, are kids not yet in high school. You should also worry if your daughter is sexting photos to random kids. Your daughter might be pressured (e.g., she’s getting “Please send me a picture. You’re so beautiful,” requests), or there might be another red flag. Because as Rosin explains, “Sexts don’t create sexual dynamics; they reveal them.”

If that’s the case, if sexting has, in fact, become a form of sexual activity, then I’d have to ask myself not if I’m against sexting. But if I’m against my kids being sexually active. The answer is: no. I’m not.

Obviously, not right now because my kids are 10 and 5! But soon enough, they’re going to be 16. I’m going to be in a position one day where my daughter has a boyfriend (or a girlfriend) and I’ll encourage her to be open with me. I’ll tell her exactly what my mother told me: “It’s okay to have sex if you love someone and if they love and respect you.” I’ll take her to the gynecologist for birth control. And if she’s sending naked pictures to her boyfriend, I’ll cross my fingers and hope that she knows what she’s doing.