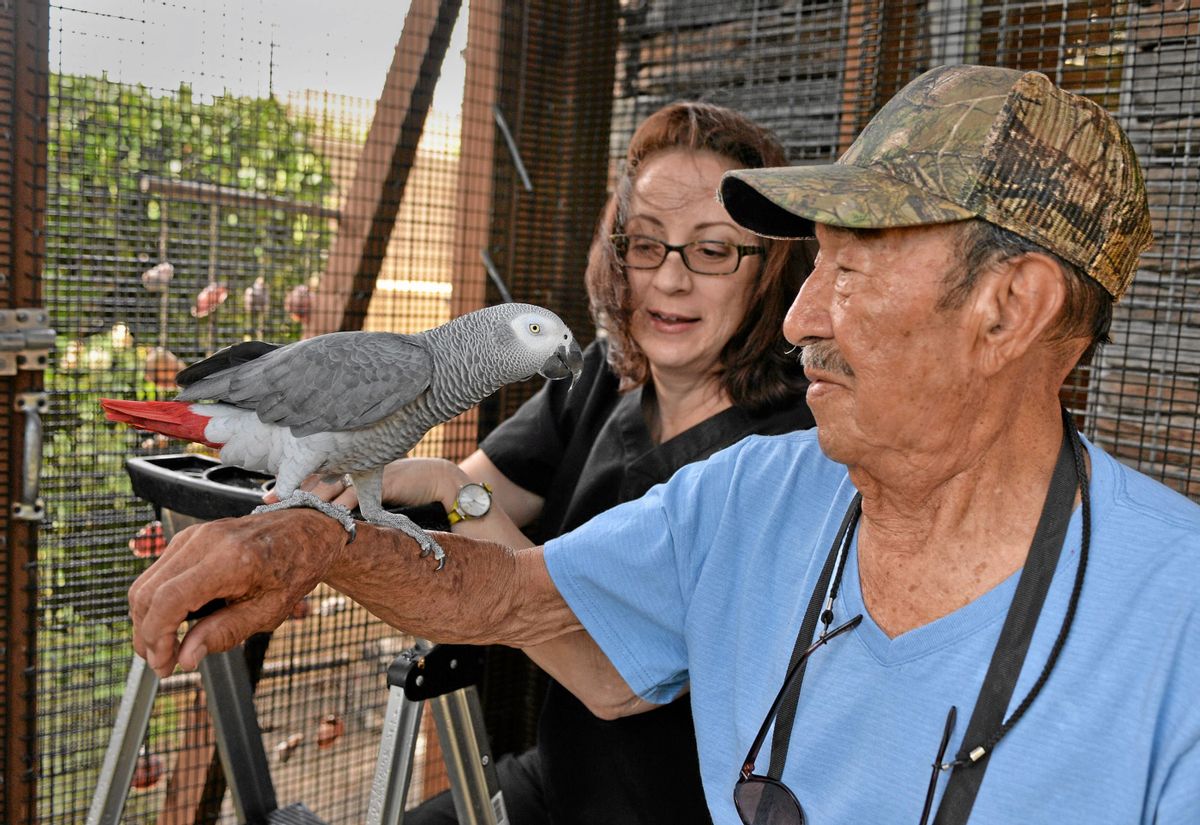 In this Oct. 15, 2014 photo, Nigel, the parrot, was reunited with his second family this week after original owner Darren Chick decided to give him back to the family that had bonded with him the last four years in Torrance, Calif. The reunion was brought about by a Southern California veterinarian who mistook Nigel, an African gray parrot, for her own missing bird, the Daily Breeze reported Sunday. (AP Photo/The Daily Breeze, Robert Casillas) (AP)
--

TORRANCE, Calif. (AP) — A pet parrot that spoke with a British accent when it disappeared from its home four years ago has been reunited with its owner — and the bird now speaks Spanish.

The reunion was brought about by a Southern California veterinarian who mistook Nigel, an African grey parrot, for her own missing bird, the Daily Breeze reported Sunday (http://bit.ly/1qU5dU3).

"I introduced myself and said, 'Have you lost a bird?'" Micco told the newspaper. "He initially said, 'No.' But he thought I meant recently."

When she verified Chick's name and said she had his African grey parrot, "He looked at me like I was crazy."

Little is known about Nigel's whereabouts the past four years, but Chick says the bird's British accent is gone, and it now chatters in Spanish.

Chick says last week's reunion brought tears of joy to his eyes — despite the fact that Nigel bit him when he first tried to pick him up.

Micco said the behavior was not unusual and that Nigel would settle back in soon enough.

"He's doing perfect," Chick told the newspaper by the week's end. "It's really weird. I knew it was him from the minute I saw him."

It's the fifth parrot reunion facilitated by Micco, who has been running ads for her own missing bird for nine months. That parrot, Benjamin, flew the coop in February when it darted out a door that was left open.

Julissa Sperling found Nigel outside her home and brought him to Micco after seeing one of her ads.

But first, she took Nigel to her dog-grooming business.

"He was the happiest bird. He was singing and talking without control," Sperling said. "He was barking like the dogs. I'm from Panama and he was saying, 'What happened?' in Spanish."